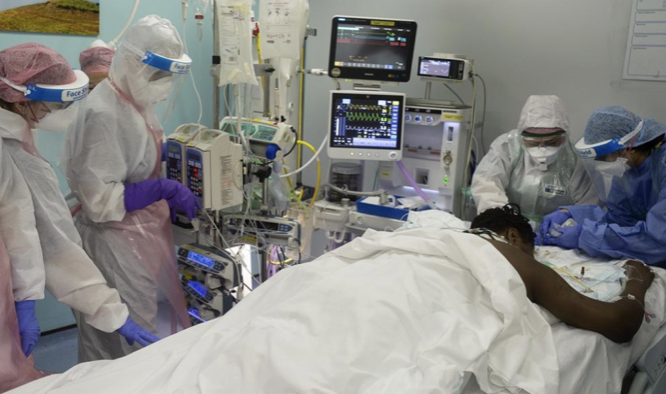 A scientist who advised Boris Johnson against introducing a lockdown with herd immunity strategy last autumn was bankrolled by a billionaire Tory donor, openDemocracy revealed at the weekend.

openDemocracy revealed that Gupta received almost £90,000 from the Georg and Emily von Opel Foundation to fund research “into the prevalence of COVID-19 in the population” in April last year.

The funding was registered a week after Gupta incorrectly suggested that half the UK population may already have been infected by the COVID-19 virus.

The von Opels gave more than half a million pounds to the Conservative Party during David Cameron’s premiership.

Gupta’s arguments against lockdowns – and in favour of “herd immunity” – have found favour among Tory backbenchers, as well as in the British government.

Before the meeting, which was also attended by Sweden’s state epidemiologist Anders Tegnell, Johnson was reportedly on the verge of ordering a short “circuit-breaker” lockdown to stall the rising COVID numbers in line with advice from members of the government’s Scientific Advisory Group for Emergencies (SAGE).

Gupta told the prime minister that lockdown was unnecessary and that herd immunity could be achieved “in the order of three to six months”, according to reports in The Sunday Times.

At the same meeting, Professor John Edmunds of the London School of Hygiene and Tropical Medicine is believed to have said that an immediate circuit-breaker lockdown was necessary.

Less than 24 hours later, the prime minister decided against introducing tight restrictions, effectively side-lining his official medical and scientific advisers. A subsequent ‘second wave’ saw a surge in infections and deaths across the UK.

Tegnell, who has been accused of pursuing a herd immunity approach in Sweden, has declined to say what was discussed at the Number 10 briefing.

openDemocracy asked the Cabinet Office for details of correspondence between Tegnell and the Prime Minister. Michael Gove’s department confirmed some of this information was held, but declined to reveal it because “it would weaken ministers’ ability to discuss controversial and sensitive topics free from public scrutiny.”

Gupta told openDemocracy there was “no conflict of interest” in her work on COVID – which serially criticises what she calls the “hammer and dance” approach of lockdowns and travel bans – being funded by the von Opel’s personal foundation.

The Oxford professor was also among the authors of the Great Barrington Declaration, which advocated naturally acquired ‘herd immunity’ as a solution to the pandemic. The strategy was described by the head of the World Health Organization as “scientifically and ethically problematic”.

Professor Martin McKee, former president of the European Public Health Association, told openDemocracy that one of Gupta’s recent research papers – about Sweden’s pandemic response – was “an attempt to muddy the waters” that “reads like a denialist text, with many features of that genre”.

Georg von Opel, the Swiss-based great-grandson of the German car manufacturer, and his wife Emily were key Tory funders during David Cameron’s time as prime minister. The couple – who last donated to the Conservatives in 2016 – were given personal access to Cameron and enjoyed private dinners with the then prime minister and his family.

The Georg and Emily von Opel Foundation was formed in 2005. The foundation, which is chaired by Georg with his wife as one of only two trustees, largely concentrates on helping communities in developing countries through improvements in child development and education, combating hunger and malnutrition, and projects to improve access to water and sanitation.

But in April 2020 the von Opel Foundation made “an unrestricted gift” of £88,332 to Oxford University “to support Professor Gupta’s research into the prevalence of COVID-19 in the population”.

Later that month, Gupta wrote to Georg von Opel to tell him that she had appeared on a Channel 4 debate titled “Can science beat the virus?”

“I tried to make the point even more strongly that we cannot just consider the question of lifting lockdown in the single dimension of what it will do to the pandemic but they have cut it down dramatically,” Gupta wrote in an email obtained by openDemocracy under Freedom of Information legislation.

The funding of Gupta’s COVID research was described by a leading NGO executive, whose organisation has benefitted from von Opel cash, as “a departure that suggests a political objective rather than an overtly humanitarian one”.

openDemocracy contacted the foundation asking why it had funded Gupta’s research. No reply was received.

Gupta’s forecasts on the state of the pandemic have often been criticised. In September, the same month she met with Boris Johnson, she said that the daily infection of 50,000 was “likely to be wrong”. It wasn’t.

Her research has, however, often been cited by members of the influential Covid Recovery Group (CRG) of backbench Conservative MPs pushing Johnson to lift lockdown measures.

Last May, Tory MP Steve Baker approvingly tweeted a news story in The Daily Telegraph quoting Gupta’s comments that the coronavirus epidemic was “on the way out” and urging pubs and restaurants to be allowed to re-open.

Baker, who at the Covid Recovery Group has employed many of the same approaches that he used while chairman of the pro-Brexit European Research Group, cited Gupta’s involvement when calling on his Twitter followers to sign up to the Great Barrington Declaration.

Unusually for an academic paper, it was widely shared on social media. American author Naomi Wolf, who has been accused of spreading COVID misinformation online, tweeted it to her almost 120,000 followers.

Sweden’s per-capita COVID death and case rates are among the worst in Europe, with a recent paper in the Lancet medical journal saying that “too many people are dying unnecessarily in a country without timely concerted actions to interrupt high transmissions and the burden of deaths and illness.”

Professor Martin McKee pointed out issues in Gupta’s paper on Sweden, such as testing and the interpretation of mortality data,“invalidated any comparisons.” He added: “I’m afraid I don’t find this particularly plausible.”

McKee said the paper contained some surprises. “For example in the discussion section, it says that the return of SARS-CoV-2 in the autumn was ‘as generally predicted’. Yes, but not by these authors who predicted that the disease would largely disappear after the first wave because of widespread existing immunity”.

Gupta also co-authored a paper on Sweden’s pandemic response, which said that the Nordic state had followed a mitigation strategy “focused on risk-tailored approaches”. The paper, which appeared late last year just as Britain was debating a second lockdown, said the decisions made in Sweden reflected “social priorities”.

The paper, published in the Annals of Epidemiology journal, called the suppression strategy used in the UK and other countries throughout the world a “hammer and dance” policy that mandated closures and lockdowns and consisted of contact tracing and quarantines and travel bans.

Gupta’s Swedish paper was widely cited by many opposed to lockdowns. Jeffrey Tucker, director of the American Institute for Economic Research, the dark money-funded think tank behind the Great Barrington Declaration and herd immunity, called the Gupta paper “wonderful and brilliant”. He tweeted “Love the phrase ‘hammer and dance’ to describe how most governments have approached C19 – as opposed to Sweden.”