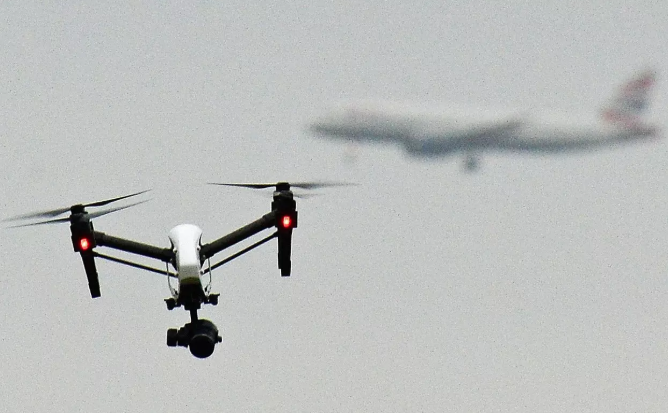 By Chris Cole – DroneWarsUK: Drones dominated the headlines over the Christmas and New Year period after sightings of one or more commercially available drones closed Gatwick airport to flights for 2½ days, disrupting thousands of passengers. The inability of the authorities to track down the drone operator led to ministers calling in the military with counter-drone technology to give assurances to air operators that it was safe to re-open the airport. Heathrow was also closed for an hour due to the presence of a small drone.

While many newspapers mocked the alleged incompetence of the authorities in not dealing with the situation simply and swiftly, the reality is that drones are a disruptive technology. The ability to use remote-controlled systems to intervene at distance with little or no consequences to the operator is perhaps now coming home to roost.

While most writers and commentators ignored wider questions about the impact of the technology on security more broadly, renown military historian Max Hastings in The Times drew clear links between the Gatwick drone and drone use by the military overseas. Referring to drone strikes carried out by the US and the UK, Hastings wrote:

It is remarkable how little interest, far less dismay, such activity arouses among American or British people. Last March we expressed outrage when Russians sought to murder the double agent Sergei Skripal and his daughter, Yulia, in Salisbury. But the use of robotic weapons abroad, in pursuit of our own war on terror, is deemed acceptable. Killing from 10,000 feet conveys an absolution, in my view a spurious one, upon those who carry it out, even when significant number of innocents perish from mis-aimed US bombs or rockets.

“Now that we have seen the damage that can be inflicted upon a British airport by primitive commercial UAV activity, maybe we shall think again about the promiscuous use of drones by western governments and lack of effective control of their commercial brethren in Britain.”

That “promiscuous use” overseas continues to grow, with barely a public mention.

In the final weeks of 2018, there was a sharp increase in British and US air and drone strikes against ISIS in Syria by US and UK forces in an attempt to wipe out the remaining pocket of ISIS fighters in eastern Syria.  Airwars reported large numbers of civilian casualties from Coalition airstrikes there in November 2018 (estimated at between 221 and 631), the highest civilian death toll alleged by Coalition actions since the fall of Raqqa in Oct 2017.

US drones also continue to launch increasing numbers of strikes in Africa. The US reported that it had carried out a ‘precision strike’ (often used as code for a drone strike) in late November in southern Libya. While their smooth press release simply stated that 11 terrorists had been killed, locals, disagreed and reported that a number of civilians were in fact killed in the strike. 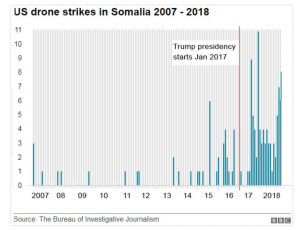 Elsewhere, US strikes continue to increase in Somalia.  According to the Bureau for Investigative Journalism (TBIJ) Africom has now carried out at least 46 confirmed airstrikes in Somalia in 2018, following the previous record of 38 in 2017.  Washington Post Journalist and drone watcher, Craig Whitlock has suggested that this is likely to be a new, unknown US drone base in Somalia to enable this increase in strikes.

US drones also continue to launch strikes in Yemen. On January 1st, the US reported that it had launched a targeted strike against the alleged suspect in the bombing of the USS Cole in 2000, Jamal al-Badawi. The US have subsequently confirmed his death but it should be remembered that other high profile targets, reportedly killed by drones, have often re-surfaced long after their alleged death.

Other nations too, are beginning to ratchet up drone use. In mid-December French drones based in Niger tracked alleged militants crossing from Niger into Mali before calling in a strike by a Mirage jet (French drones are due to become armed themselves this year). Six suspected militants were reported killed.   Turkey, meanwhile, continues to use its drones alongside manned aircraft to launch attacks against Kurdish groups inside Iraq.

A taste of the impact

While there are, of course, very significant underlying differences between armed military drones and their smaller, civilian cousins, the way in which the technology has impacted on the peace and security of innocent bystanders has been brought into sharp focus by these incidents at UK airports. The seeming impunity for operators, the difficulty for those impacted to gain accountability and the overall lack of political will by governments to put in place robust controls over the technology is clearly common to both.