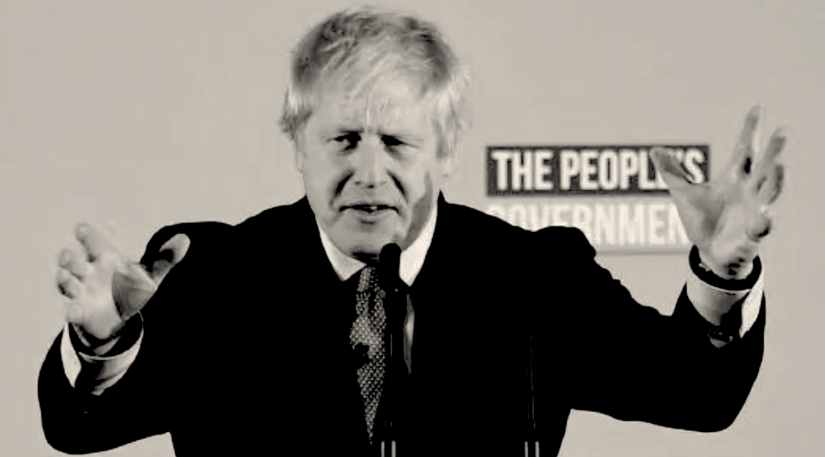 By TruePublica Editor: Let’s say what has to be said about this election. Leave won, Remain lost.

We have dramatically entered a new era of politics in Britain. ⁦‪This era is defined by its realignment. Boris Johnson‬⁩ and Dominic Cummings played by a new set of rules. They used outdated protective legislation to their advantage –  pitched “the people” against our great institutions and make no mistake, they won. We should never, ever forget or under-estimate the significance of their victory or what it really means.

Those institutions that have been heavily undermined over the last few years will continue to see democracy in retreat.

But even after all the lies, the cheating, dark money interests and chicanery – Leave won and Remain emphatically lost.

Lots will be said about this election. It was a tale of two stories.

Corbyn and his clique, promoted by Momentum, ended up betraying their class, their party, the country and Europe itself. Labour was, as I said back in 2015 when Corbyn was elected Labour leader going to lose big – and they did. Their Political ineptitude was driven by a response to a Tory class war and they lost on a grand scale. Jeremy Corbyn was never electable. Not from day one. It was Labour’s worst defeat since 1935.

And when the significance of this election that has led to Brexit is written – the Lib Dems’ decision to let Johnson hold this miserable election will be seen as a key strategic error for us all. The more sensible of Labour MPs stopped Corbyn on multiple occasions last summer and early autumn from agreeing to an election. But when Jo Swinson broke ranks as she did, the SNP immediately followed suit and Labour couldn’t hold the line. And here we are.

So here’s some more rather obvious straight talk.

The establishment media went for Corbyn big time. The extent of media propaganda against Corbyn was plain as day when a Factiva media search covering 45 days since the election was called to election day itself which saw the following result. Articles in UK national press (not broadcast):

That should tell you everything about ‘democracy’ in Britain today. Even in America – the press was appalled. British historian Mark Curtis said – “I’d be interested to see other research, to compare to these figures. Obviously, UK has undergone its biggest media propaganda campaign since 1945 and perhaps the biggest in Europe since the collapse of USSR. It should have significant impacts on media/communications studies in academia.”

An emboldened governing right-wing party now has no real opposition at all.

Labour will disintegrate and will struggle to reform for at least five years, probably not becoming a force to be reckoned with for a decade. The LibDems are nothing. Scottish nationalists now have the upper hand. For the next decade, the institutions that upheld civil society for the last seven decades will continue to be eroded. The breakdown decade of 2020 to 2030 has arrived. It’s now a full-on race for the have’s and no starting gun for the have not’s.

One of Boris Johnson’s biggest lies is that Brexit will happen and we’ll all be better off. It won’t and we won’t. The year 2020 will be a year of more infighting and more break down and 2021 will see the Brexiteers ultimate dream – a no-deal hard Brexit. So what has the country given Boris Johnson a mandate for?

Philip Gurevitch, Staff Writer at The New Yorker quite rightly lays it all out in one sentence:

“Imagine having a passport that allows you to move freely between, live in and work in 28 countries, including many of the worlds most affluent, with excellent free health care and social services wherever you go & voting to tear that passport up and be stranded on an island”

That is what just happened. The under 50s are overwhelmingly Remainers, the over 50s are more likely Leavers (but more of them vote). Time will eventually lead us all back to the same place we just departed but by then, Britain will not be the country it is now.

Boris Johnson has promised Remain voters that a ‘One Nation’ Conservative Government would “never ignore” the “positive feelings of warmth and sympathy towards the other nations of Europe”. How is that ever possible after all the lies about our economic and political neighbours (and allies) and the total abandonment of one-nation Conservatism? And he urged everyone to “find closure and to let the healing begin” as he talked about using his “extraordinary majority” to bring the country together and “unite”. How is that remotely feasible when the demographics are 100% against it, as ethno-nationalist voices continue to shout loudest and authoritarian corporatism drives political and social outcomes?

Boris Johnson beat Theresa May by just 1 per cent and yet hers was a dramatic loss and his a landslide.

For anyone still thinking that our electoral system is a good one, which it is not, and that proportional representation isn’t needed, this little snippet is a reminder that things need to change. The Tories won 56% of the seats based on 44% of the vote, whilst the SNP won 81% of Scottish seats based on 45% of the vote. On that basis, Johnson beat Theresa May by just 1 per cent and yet hers was a dramatic loss and his a landslide. In reality, that landslide was created from Labour’s fall in the vote share of just 7.4 per cent. Tell me it’s not time we had proportional representation in our elections.

This broken outdated system has been ditched by most self-respecting countries around the world. Not one country in Europe uses it – for good reason. Zambia, Uganda, Singapore, Ethiopia, Belize and Azerbaijan do. Only a tiny handful of Western democratic nations still uses FPTP – America is one of them – and look what’s happening to them.

With Boris Johnson’s government – a government that maliciously and unashamedly threw out its moderate and most loyal voices, Britain now joins the ranks of countries like the USA, Brazil, Turkey, India, and Israel, among others that can rightly boast a fairly savage form of rightwing political regimes – that were all voted in on a raft of nationalism.

One of the most extraordinary elements of this election ever witnessed will be how former working-class mining towns replaced the party that had represented them and their rights for a hundred years or more with the party that spent the last four decades literally tearing them apart. Boris Johnson had called working-class people drunks, criminals and feckless yet there they were voting him back in office in really solid numbers on the basis of Brexit. All across Wales, the Midlands and the north of England, working-class towns affected by austerity, saw their defenders fall like flies. Somehow, they forgot that an ideology called austerity that killed thousands in their own communities was not as important as the pseudo-religious battleground of Brexit.

And let’s not forget something else – Brexit isn’t British, it’s English.

Scotland’s call for independence will likely come quite soon – how would it be possible to deny them that right – after all, England gave itself that right. And as one former British ambassador put it with Ireland, there was – “a seismic shift in a net gain of two seats in Belfast from the Unionists, plus the replacement of a unionist independent by the Alliance Party. Irish reunification is now very much on the agenda. The largesse to the DUP will be cut off now Boris does not need them.”

Britain (via England)  just voted to reduce its landmass by 40 per cent, its fishing grounds by 60 per cent and in so doing, its geopolitical position on the world stage. Britain no longer has a say in the big-ticket issues that shapes the world order – because no-one outside of it cares that much any more.

What worries me is that there has been a vindication of a nasty form of nationalism that will not now be tackled. What also worries me is that it will take a decade to rebalance this vile form of politics imported from America. And don’t forget, Boris Johnson has already baked in a new era of authoritarianism having granted himself new powers unprecedented (excepting World Wars) for 400 years.

And with support from those traditionally opposed to capitalism but somehow more attracted to nationalism – having given the green light to people like Rees-Mogg, Duncan-Smith, Gove and Cummings – England is now wedded to its own misery of its own making.

There are many on the left of centre – those centrists hated so by Labours left, by the extremes of Momentum, that will now give up and forget what is best for civil society. Soon, they will see the lies accelerate child poverty, homelessness, the carving up of the NHS and more and say – you voted for it and turn their backs on the most vulnerable. If we thought the Tories had damaged our society over the last ten years, wait for the next ten. It was already bad – but these are truly dark times if you slip between the cracks.

In England, we now know that deceit, dishonesty and dark money can win big majorities. Authoritarianism now beckons. I warned about this day when David Cameron came to power in 2015 without the shackles of the coalition. I warned that he would fall by offering a protest vote to an austerity stricken country. I warned that Theresa May would make it worse.

And when a second chance was given – England voted still for it. But unlike the referendum vote of 2016 – everyone was well aware of what they were voting for in Boris Johnson. We will now leave the EU on January 31. That can’t be stopped now.

The Remain campaign will now change tactics and be called Rejoin.

TruePublica started over four years ago to help add voices to combat the rise of disinformation and propaganda, which inevitably leads to authoritarianism – and that is exactly what has just happened.