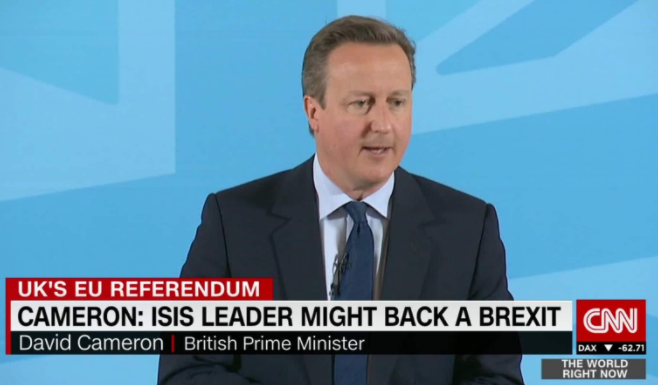 By Paul Mitchell wsws.org: A report published last week by British MPs[Members of Parliament] on the June 23, 2016 Brexit vote, “Lessons Learned from the EU Referendum,” is being used to whip up accusations of “foreign interference” and stoke up demands for a “major” new cyber security programme. 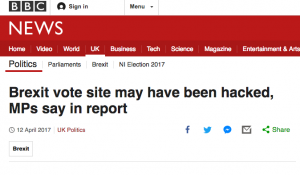 The Guardian declared in response to the report’s publication, “…foreign states may have interfered in the vote…” with the BBC proclaiming, “Brexit vote site may have been hacked.” London’s Standard newspaper cast aside any doubt, telling its readers, “Brexit voting website crash ‘caused by foreign cyber attack’,” inventing a quote along the way. The Sun similarly declared, “Russian ‘Cyber Hit’ On EU Vote Website.”

No one reading the press headlines would gather that the bulk of the report, produced by the cross party House of Commons Public Administration and Constitutional Affairs Select Committee (PACAC), is concerned with devastating criticisms of the then Prime Minister David Cameron and his Conservative Party government.

Cameron is accused of holding “a ‘bluff-call’ referendum in order to close down unwelcome debate,” using state funding and civil servants to unfairly promote a Remain vote and failing to prepare “proper planning for a Leave vote.” As a result, his credibility was “destroyed” and the reputation of the Civil Service for impartiality “damaged,” the Committee concluded.

These criticisms should have led to calls for the Conservative government to resign and action taken against Cameron and his associates for fraud. But no, all of this was brushed aside by the media. Instead, the focus was on the crash of the Voter Registration computer system on June 7, 2016 and unsubstantiated claims that Russia was involved.

At the time, the crash was put down to a sudden increase in applications as the deadline approached. More than 500,000 people tried to register on the final day, with the crash taking place 100 minutes before the registration deadline ended. There were no suggestions from government, other politicians, or the media that foreign powers may have been involved in the crash or that hacking was responsible.

The “Lessons Learned” report, based on expert testimony, explains that the cause of the crash was “an exceptional surge in demand… the sheer numbers of duplicate applications and confusion as to whether individuals needed to re-register.” In addition, the government “clearly failed to undertake the necessary level of testing and precautions” and that when problems arose they were “not further investigated and corrected.”

The report then makes the ludicrous claim that while US and UK government involvement in cyberspace is “predominantly technical and computer-network based,” Russia and China use “a cognitive approach based on understanding of mass psychology and of how to exploit individuals”—that is, they engage in propaganda and brain-washing.

It would appear that references in the report to Russian interference were inserted at a later stage, after the Putin government was accused of using hackers to undermine the Hillary Clinton campaign during the US Presidential race late last year. Nowhere in the report are there any references to the source of the information about DDOS, botnets, cognitive approaches or mass psychology.

None of the written evidence submitted to the committee by 104 individuals and organisations made any reference to Russia.

Of the hundreds of questions asked during the three days of oral evidence, only three questions—in the session on November 1, 2016—concerned Russian interference and were obviously introduced as an afterthought as the anti-Russian campaign in the US was reaching fever-pitch. They were asked by Labour committee member Paul Flynn and directed at Electoral Commission chair Jenny Watson.

Flynn asked Watson, “Are the rules sufficiently robust to detect interference from a government like Russia’s, knowing Putin’s declared policy of campaigning to weaken the European Union and the allegations made about Russia’s conduct in the American presidential election?”

Watson replied, “If you are talking about the outcome of the referendum, I am confident that the declaration I made on the morning of 24 June reflects the votes that were cast by voters.” She added, “I would imagine that those kinds of questions would be best asked of the security services, to be quite honest.”

It is clear that the intelligence agencies—whose heads have made numerous anti-Russian statements over the last period centred on unsubstantiated allegations of all manner of “interference” by Moscow—were duly approached to give their position.

Announcing the publication of the “Lessons Learned” report, Select Committee chair and Conservative MP Bernard Jenkin focussed on the web site crash, declaring, “We have taken advice on this and you cannot rule out the possibility it was a direct attack.”

“We’ve seen this happen in other countries. Our own government has made it clear to us that they don’t think there was anything, but you don’t necessarily find any direct evidence,” Jenkin explained.

While claims of “interference” in the Brexit referendum campaign by Russian president Vladimir Putin are uncritically accepted as good coin, the blatant—indeed unprecedented—interventions by Western leaders in the referendum were positively welcomed.

In April 2016, former US President Barack Obama flew to the UK to warn that the country would be at the “back of the queue” in any trade deal with the US if people voted to leave the EU. He declared that if he were a British voter, he would think twice about leaving a market that makes up 44 percent of British exports, and is “responsible for millions of jobs and an enormous amount of commerce upon which a lot of businesses depend.” The Guardian crowed, “Obama sends the right message.”

Days before the referendum German Chancellor Angela Merkel broke “her self-imposed vow of silence” on the Brexit vote to say, she hoped the British population would vote to remain “for the benefit of all of us.” She then threatened that the UK would get a worse deal outside the EU.

European Council President Donald Tusk warned that a Leave vote would have “dramatic” negative consequences and European Commission President Jean-Claude Juncker declared, “deserters will not be welcomed back with open arms.”

Compared to these belligerent pro-Remain “interferences”, Russian reactions, according to Newsweek magazine, were “notably restrained.” It added, “the immediate foreign policy fallout from the British referendum has been more muted than one might have expected.”

Putin attacked the claim made by Cameron that Russia would savour the crisis produced by the UK leaving, accusing him of using the anti-Russian card to instil fear ahead of the referendum. Following the vote to leave Putin warned that its “traumatic effect” would last a long time.

Whether or not Putin’s pronouncements are to be believed is not the issue. As the President of the Russian Federation, Putin is the country’s elected head of state and has every right to put forward Russia’s view on such a fundamental issue as the Brexit referendum.

The report marks only the latest episode in British imperialism’s anti-Russian campaign, backed by their media echo chambers.

In February, Ciaran Martin, head of the UK’s new National Cyber Security Centre, told the Times there had been “a step change in Russian aggression in cyberspace. Part of that step change has been a series of attacks on political institutions, political parties, parliamentary organisations and that’s all very well evidenced by our international partners and widely accepted.”

This was stated alongside a number of entirely unsubstantiated scare stories by the British political and media establishment that Russia was seeking to interfere in this year’s French and German elections.

In contrast to much hyped and unsubstantiated claims of Russian meddling in British politics, around 120 UK troops arrived in Estonia last month as part of one of the biggest British deployments to Eastern Europe in decades. These were joined by 300 UK vehicles, including Warrior infantry fighting vehicles, Challenger 2 tanks and AS90 self-propelled artillery pieces. A further 680 UK troops will arrive in Estonia this spring, as part of NATO’s enhanced Forward Presence—a critical component of NATO’s ongoing military build-up and encirclement of Russia.