UK tells trapped interpreters from Afghanistan to escape on their own 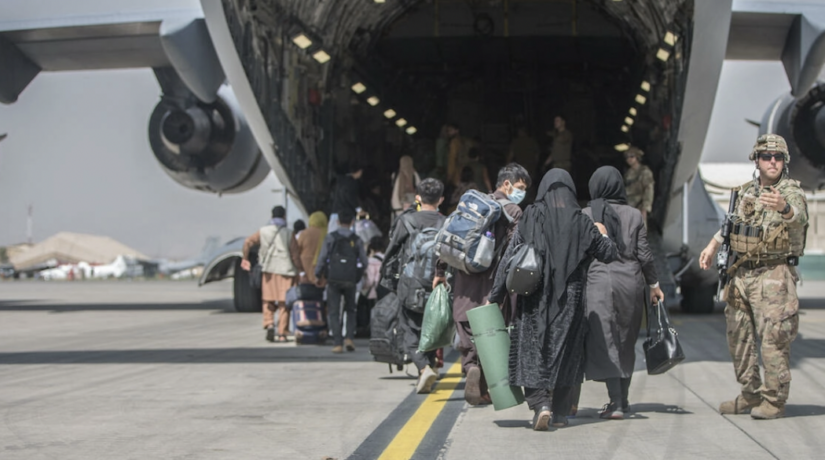 By Adam Bychawski: Afghan interpreters who were left behind during the evacuation of UK military and diplomatic personnel earlier this year have accused the British government of “playing with their lives” after it advised them to escape Afghanistan on their own.

In emails seen by openDemocracy, the Ministry of Defence (MoD) told them to “actively consider evacuating to a third country”, but warned that the journey is “potentially dangerous”.

“They’re asking us to risk our lives by attempting to cross the border,” said Amina, a former UK embassy worker.

The MoD told Afghans eligible for evacuation that if they make it across the border then “support and your onward journey to the United Kingdom can be arranged by the High Commission or Embassy staff”.

“To be told to put themselves in danger by moving to a neighbouring country without any assistance from the UK feels morally indefensible,” said Dr Andrew Kidd, a former civil servant who managed the UK Aid programme in Kabul for three years.

More than 8,000 Afghans and their families were evacuated by the UK from Kabul during Operation Pitting in August. But the defence secretary, Ben Wallace, admitted last month that more than 1,200 Afghans did not make it onto an evacuation flight.

Several Afghans who are in hiding from the Taliban in Kabul told openDemocracy that the UK government’s advice to attempt to leave at their own risk was “totally mad”.

Sayed, a former military interpreter, said that there are several Taliban checkpoints on the way to the Pakistan border and anyone traveling there would raise suspicions that they worked for a foreign government.

“I would be completely in danger if I tried,” he said.

Abdullah, a former educator, said that his family and five others had tried to follow the advice but were turned away at the border.

“It’s completely contradictory advice. We risked our lives,” he said. “We went to the border after we were told the British High Commission in Pakistan will facilitate your crossing. We waited for days, but this didn’t happen and we were so disappointed and discouraged.”

“We passed through several Taliban checkpoints on the way. Every time we were stopped they were asking different questions. If they discovered our identities, our lives would be seriously in danger.”

Several Afghans and former civil servants working to get them out told openDemocracy that the borders between Pakistan, Uzbekistan and Tajikistan are closed.

None of the people who spoke to openDemocracy had been given documentation by the UK to help them cross the Afghanistan border.

“I feel like they are not taking responsibility for us anymore,” said Amina. The former embassy worker said she has been unable to work or leave the house alone since the Taliban captured Kabul.

“It’s been more than three months and I’m still uncertain of my future, what’s going to happen. It’s an extremely difficult situation, it’s an extremely stressful situation. It’s affecting our mental health, we are all depressed,” she added.

Several people said they had been advised to sell all their belongings and leave their homes behind by British military personnel who organised the August airlift because they would be evacuated in weeks.

But some who were never able to get on a flight have now been left with nothing.

This month, the Spanish government evacuated 266 of its former Afghan workers following negotiations with the Taliban. Ukraine was also able to rescue 96 Afghans in September.

“I am sorry to say that other countries are giving us lessons in how to treat those that have served our country well,” said senior Conservative MP David Davis. “If Spain and Ukraine can rescue their supporters from Afghanistan, then we should be able to do the same. If not more so, given the resources available to our armed forces.”

Boris Johnson boasted in his Conservative Party conference speech last month: “Very few countries could have pulled off the Kabul airlift – an astonishing feat by our brave armed forces.”

He added: “Even fewer have the same moral priorities.”

Sayed said the way the UK had treated Afghan families had made him regret serving in the military.

“My kids cannot go to school and when they ask me ‘Why father, why can we not go outside, why can we not go and play?’ I have no explanation for them. The only thing that I feel you know in my heart is that I blame myself that I worked for the British.”

The former foreign secretary, Dominic Raab, was criticised this week for ignoring advice by the British Ambassador to start rescuing Afghans months before the Taliban takeover of Kabul. The French government started evacuating its Afghan staff in May.

A Ministry of Defence spokesperson said: “The RAF has airlifted 35 people who have left Afghanistan to the UK, including Afghans and British nationals. This marks the beginning of what will be a long-standing effort to relocate people and we are working towards more flights over the coming weeks.”

*Names have been changed to protect the anonymity of interviewees. Adam Bychawski is a reporter at openDemocracy.