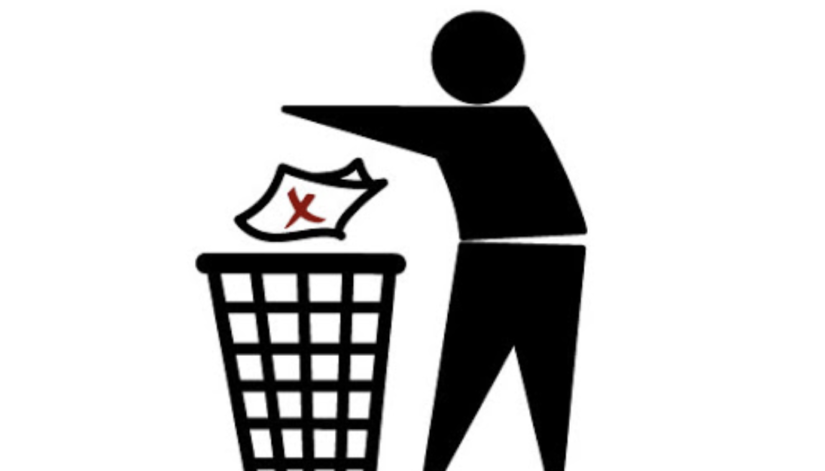 By Megan Collins: Last week the Electoral Reform Society revealed how many votes went ignored in December’s general election: an astonishing 22.6m ballots did not count towards electing an MP. But behind the headline figures are people’s voices across the country being systematically silenced by Westminster’s winner-takes-all voting system. That system affects people’s representation in different ways across the UK.

For example, the East of England topped the table, with 74% of votes – 2.2 million – not contributing to the election result. This was followed by London, where 2.7 million voters (73%) of voters were ignored.

Why? Under Westminster’s First Past the Post system – among the least democratic voting system there is – all votes not cast for the one winner in each seat go to waste. Across 650 seats, that’s millions of votes being buried by the ‘winner-takes-all’ politics of Parliament. It might work for horse racing, but for national elections, it contributes to polarisation and distrust on a dangerous scale.

But as well as votes not cast for the ‘winning’ candidate going to waste, votes cast for the winning candidate above what they need are also discarded. These ‘surplus’ votes would not go to waste under a fair, proportional voting system like the Single Transferable Vote used in Ireland.

Let’s look at the figures by nation and region 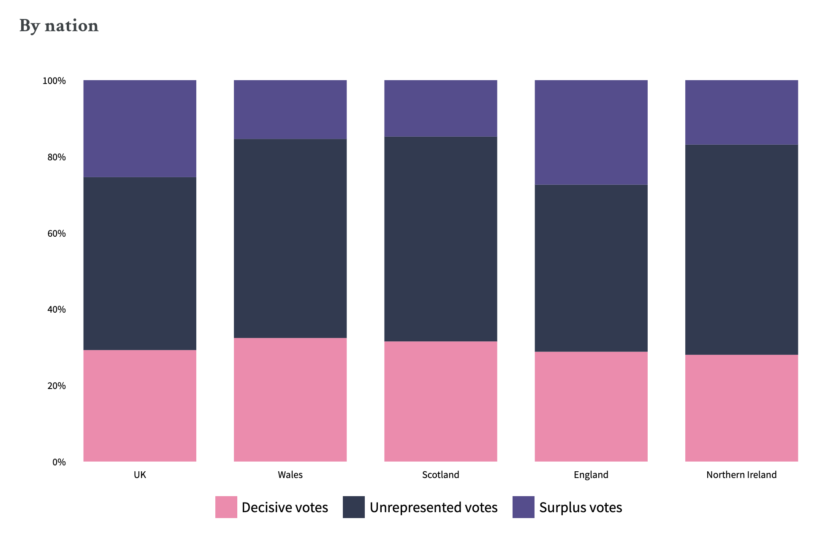 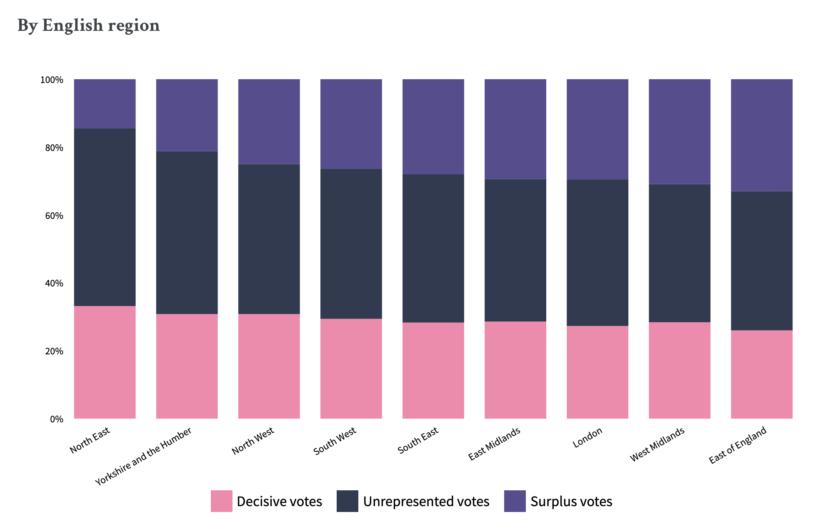 Full tables are in the appendix of the report

As you can see, just 29% of votes in England counted towards the result, and less than a third (32%) in Scotland and Wales respectively. The statistics within England paint a similarly bleak picture.

What kind of a political system disenfranchises voters on such a mass scale? The UK is the only country in Europe to still use this unjust way of picking MPs – and it’s time for change.

Ignored votes aren’t numbers: they are millions of ordinary voters like you and me who want their voice to be heard. Sadly, Parliament today represents a startling small proportion of those who voted. Without moving to proportional representation, this problem is going to repeat itself time and again.

“People are tired of having to choose tactics over policies – we need a Parliament that represents all of the voters cast in elections, not just a select few”

Whichever region or nation you live in, when only one party stands a chance in a seat, the issues we care about are easy to ignore. It’s time that voters are heard, wherever they are in the UK. People are tired of having to choose tactics over policies – we need a Parliament that represents all of the voters cast in elections, not just a select few.

These fresh findings are another indictment of Westminster’s current one-party-takes-all system. Under the current system, millions of voters across the country are left effectively voiceless – with all votes not cast for the one winner in each seat going effectively ignored.

It is no wonder trust in politics is at rock bottom. The vast majority of people’s votes are being systematically ignored by a voting system that is morally and politically bankrupt.

What’s the way forward? We have to make seats in Parliament match how people want to vote, through a fair, proportional electoral system. Until we make votes count equally, parties will ignore areas they think are ‘unwinnable’. Nowhere should be seen as a ‘write-off’ by politicians.

Instead, let’s reform Westminster’s broken system and ensure real choice – and a clear voice – for people across the country.