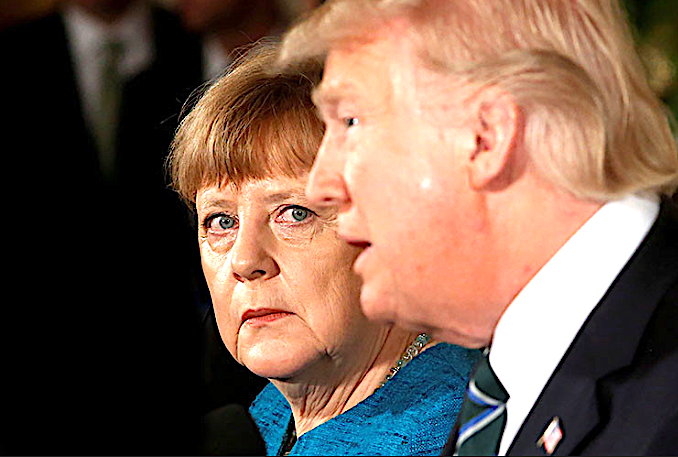 By Graham Vanbergen: Relations between the US and EU, or more truthfully, Germany, had been deteriorating under the Obama administration for some years, but with Trump, dangerous new lows are being reached monthly. Geo-politically, the EU is now entering a new period of uncertainty as the bloc is forced to agree what to do collectively about new US sanctions against Russia. Eastern and Western Europe are split as retaliatory measures against the US are considered whilst Russia confirms relations with the US are now worse than the cold war.

After the American led collapse of the financial system in 2008 that shook the world, Obama was unhappy that the ECB did not toe the line exactly as ordered by Washington. It voiced the same annoyance over the ECB’s handling of the subsequent crisis that engulfed the Euro two years later. However, Obama was seemingly more annoyed at the German political debate to offer sanctuary to NSA whistleblower Edward Snowden, that ended with Washington fully threatening its ally. German Vice Chancellor Sigmar Gabriel said back in 2015: “They told us they would stop notifying us of plots and other intelligence matters.” In other words, America would stand by and watch atrocities on central European soil for the sake of its own ego.

The European Council on Foreign Relations confirmed that the most important strategic link that connects the US to the EU was one of security but the US had the audacity to threaten that binding relationship over something as small as a whistleblower.

Then, diplomatic relations went infantile. The hacking of Merkel’s personal cellphone by the NSA and subsequent counter-measure of expelling the most senior U.S. intelligence officer in Berlin soured relations further. Germans trust in the United States plummeted from 75% to 35% during Obama’s time in office, whilst 60% expressed the view that Snowden was an international hero much to the angst of US officials.

However, recent polls also confirm that German confidence in the United States, has now completely collapsed under Donald Trump. This much is evident with Merkel’s announcement: “The times in which we could completely depend on others are on the way out. I’ve experienced that in the last few days, we Europeans truly have to take our fate into our own hands.”

European Council on Foreign Relations survey of US presidential candidate

In the post war era, the United States has played a critical role in European security, in its economic fortunes, and even to some extent European cultural life. But the recent souring of relations got worse when it became apparent Trump might win the Oval Office. Of the 28 nation bloc, only Hungary supported Trump as president. Everyone else quite rightly assumed Trump would not continue to support European security and would present an existential crisis for the bloc, the former is already materialising, the latter is yet to be determined.

Three days ago the EU seemed to be divided on how to answer new US sanctions against Russia as it became obvious proposed new U.S. sanctions would not just affect European firms but geopolitical aspirations in terms of energy supply.

The European Union has since delivered what it terms as a ‘stern warning to the US’ over its plan to fully impose new sanctions on Russia that will further widen the growing rift between the the US and EU.

EU President Jean-Claude Juncker said this week that the bloc would act “within days” if it did not receive more assurances on the impact of new sanctions on European interests. It is clear that the EU bloc is becoming increasingly angry with the US and less patient with its actions that affects EU interests.
Russia has also inevitably reacted angrily. It says that the sanctions bill passed by the US House of Representatives on Tuesday risked worsening the already poor relations between the two countries. “It’s clear Russian-US relations have never been so difficult since end of Cold War,” the Russian foreign ministry said in a statement back in April regarding mid-east tensions.  This will only make matters worse.

From Antonia Colibasanu at Geopolitical Futures: “The U.S. House of Representatives has passed a bill to renew and expand sanctions against Russia. The bill, however, could also have a negative impact on some European energy projects that are linked to Russian companies. Since the initial bill was first approved by the Senate on June 15, the European Union has been lobbying U.S. lawmakers to revise the proposed legislation and reduce its effects on third countries. But lobbying is essentially all the EU can do at this point; it can’t retaliate against the U.S. because such a move would require approval from all member states, which is unlikely.”

On June 16, a spokesman for German Chancellor Angela Merkel said Germany does not support sanctions that have effects on third countries. Efforts to make the bill more palatable have largely failed. The Baltic LNG project run by Shell, Italy’s Eni that runs the Blue Stream pipeline and Nordsteam1 with various EU partners all work with Russia’s Gazprom. Azerbaijan’s Shah Deniz 2 gas field, which the U.K.’s BP operates with Russia’s Lukoil, Egypt’s offshore Zohr gas field, which Italy’s Eni operates with Russia’s Rosneft – all of these projects are in the spotlight under increased US sanctions.

They can now all be penalised by the US for increased investment in these strategically important projects. Nordstream2, a project that involves Germany, Austria and Russia’s Gazprom is seen by Germany as a way to secure future energy supplies away from America’s intervention and geopolitical ambitions in the Ukraine, irrespective of what the EU decides.

The EU has had enough of America meddling in its economic affairs. The fact that it has geo-political consequences on its doorstep only makes the declining relationship more serious. What is also annoying the EU Commission is that America is causing increased tensions within the bloc itself over the issue and it did so without proper consultation.

The EU’s reply will be forthcoming from at a meeting to be held on the July 26th by the European Commission. It has already declared it will “respond to the bill in kind with retaliatory measures” but European unity on the matter is divided at best and therefore unlikely to come to much, to the ever increasing frustration of all.

Germany said it would be “unacceptable for the United States to use possible sanctions as an instrument to serve the interests of US industry policies” Foreign Ministry spokesman Martin Schäfer said Wednesday 26th July.


France called the US bill “unlawful” due to its “extraterritorial reach,” saying it could impact Europeans if enacted the Foreign Ministry said in a statement. “To protect ourselves against the extraterritorial effects of US legislation, we will have to work on adjusting our French and European laws.”

Russia and EU relations with US in ‘uncharted territory’
PoliticoEU reports that “One worry is also that European energy or services companies involved in maintaining, repairing, or expanding pipelines in Russia could also be affected, which would also include the upgrade of  pipelines in Russia that feed the Ukrainian gas transit system — a crucial route of gas delivery for the EU.”

EUActiv reports that “Europe will maintain its diplomatic efforts in order to minimise the impact of the bill on the European energy sector. But if the US passes the text as it is and moves against EU energy interests, the bloc could activate retaliatory measures under WTO rules and use its trade defence instruments. The Commission would also add the US bill to the EU’s ‘blocking statute’ regulation. Accordingly, no decision based on extraterritorial US laws will be enforceable in the EU.”

Interestingly, US sanctions are effectively pushing the EU and Russia to speak with one voice. Russian Deputy Foreign Minister Sergei Ryabkov told the Interfax news agency that relations were now entering “uncharted territory in a political and diplomatic sense” – the same can be said of US/EU relations too.