America Breaks Down: The Anatomy of a National Nervous Breakdown 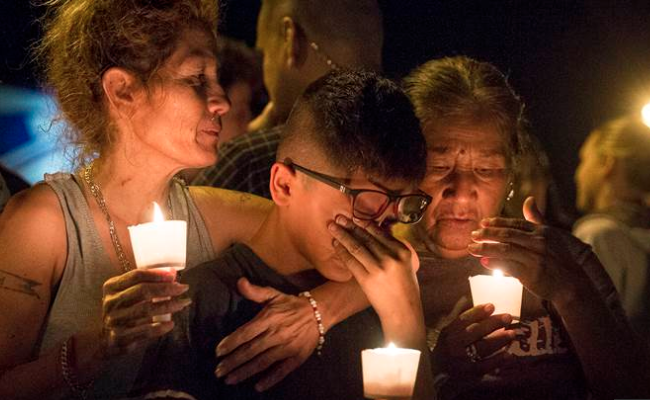 By John W Whitehead: Another shooting, another day in America. Or so it seems. With alarming regularity, the nation is being subjected to a spate of violence that terrorizes the public, destabilizes the country’s fragile ecosystem, and gives the government greater justifications to crack down, lock down, and institute even more authoritarian policies for the so-called sake of national security without many objections from the citizenry.

Take this latest mass shooting that took place at a small church in a small Texas town.

The lone gunman—a former member of the Air Force—was dressed all in black, wearing body armor, a tactical vest and a mask, and firing an assault rifle.

Devin Patrick Kelley, the 26-year-old gunman, was described as a “regular guy” by those who knew him.

President Trump and the Governor of Texas have chalked the shooting up to mental illness. That may well be the case here.

Still, there’s something to be said for the fact that this shooting bore many of the same marks of other recent attacks: the gunman appeared out of the blue without triggering any alarms, he was dressed like a soldier or militarized police officer, he was armed with military-style weapons and clearly trained in the art of killing, and the attacker died before any insight could be gained into his motives.

As usual, we’re left with more questions than answers and a whole lot more fear and anxiety.

That sense of unease is growing.

How do you keep a nation safe when not even seemingly “safe places” like churches and rock concerts and shopping malls are immune from violence?

The government’s answer, as always, will lead us further down the road we’ve travelled since 9/11 towards totalitarianism and away from freedom.

Those who want safety at all costs will clamor for more gun control measures (if not at an outright ban on weapons for non-military, non-police personnel), widespread mental health screening of the general population and greater scrutiny of military veterans, more threat assessments and behavioral sensing warnings, more CCTV cameras with facial recognition capabilities, more “See Something, Say Something” programs aimed at turning Americans into snitches and spies, more metal detectors and whole-body imaging devices at soft targets, more roaming squads of militarized police empowered to do random bag searches, more fusion centers to centralize and disseminate information to law enforcement agencies, and more surveillance of what Americans say and do, where they go, what they buy and how they spend their time.

All of these measures play into the government’s hands.

As we have learned the hard way, the phantom promise of safety in exchange for restricted or regulated liberty is a false, misguided doctrine that has no basis in the truth.

Still, why do these things happening?

Clearly, America is in the midst of a national nervous breakdown.

Things are falling apart, and the inmates in the asylum are starting to turn on each other.

This breakdown—triggered by polarizing circus politics, media-fed mass hysteria, militarization and militainment (the selling of war and violence as entertainment), a sense of hopelessness and powerlessness in the face of growing corruption, the government’s alienation from its populace, and an economy that has much of the population struggling to get by—is manifesting itself in madness, mayhem and an utter disregard for the very principles and liberties that have kept us out of the clutches of totalitarianism for so long.

When things start to fall apart or implode, as they seem to be doing lately, I have to wonder who stands to benefit from it. In most cases, it’s the government that stands to benefit by amassing greater powers at the citizenry’s expense.

Right now, we’re being conditioned to be reactionaries capable of little more than watching and worrying. Indeed, we are fast becoming a nation of bad news junkies, addicted to the steady and predictable drip-drip-drip of news—be it sensational, devastating, demoralizing, disastrous, or just titillating—that keeps us plastered to our screen devices for the next round of breaking news.

So much is happening on a daily basis that the average American understandably has a hard time keeping up with and remembering all of the “events,” manufactured or otherwise, which occur like clockwork and keep us distracted, deluded, amused, and insulated from reality.

We are suffering from “the crisis of the now.”

All the while, the government continues to amass more power and authority over the citizenry.

This is how the corporate elite controls a population, either inadvertently or intentionally, and advances their agenda without much opposition from the citizenry.

Rod Serling, the creator of the Twilight Zone, imagined just such a world in which the powers-that-be carry out a social experiment to see how long it would take before the members of a small American neighborhood, frightened by a sudden loss of electric power and caught up in fears of the unknown, will transform into an irrational mob and turn on each other.

It doesn’t take long at all.

So you see, Devin Patrick Kelley may have pulled the trigger that resulted in the mayhem in that small Texas church, but something else is driving the madness.

As I make clear in my book Battlefield America: The War on the American People, we’re caught in a vicious cycle right now between terror and fear and distraction and hate and partisan politics and an inescapable longing for a time when life was simpler and people were kinder and the government was less of a monster.

Our prolonged exposure to the American police state is not helping.

As always, the solution to most problems must start locally, in our homes, in our neighborhoods, and in our communities. We’ve got to refrain from the toxic us vs. them rhetoric that is consuming the nation. We’ve got to work harder to build bridges, instead of burning them to the ground. We’ve got to learn to stop bottling up dissent and disagreeable ideas and learn how to agree to disagree. We’ve got to de-militarize our police and lower the levels of violence here and abroad, whether it’s violence we export to other countries, violence we glorify in entertainment, or violence we revel in when it’s leveled at our so-called enemies, politically or otherwise.

Unless we can learn to live together as brothers and sisters and fellow citizens, we will perish as tools and prisoners of the American police state.