Battlefield America Is The New Normal 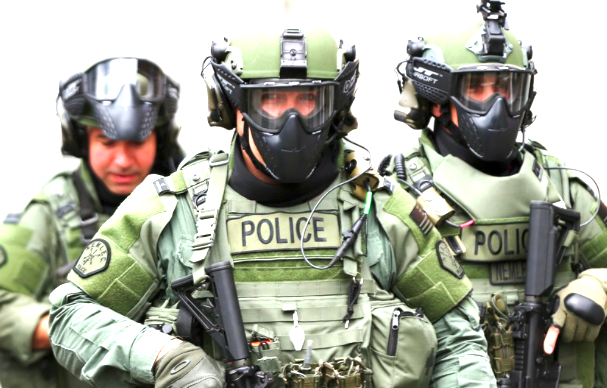 By John W Whitehead: “If we’re training cops as soldiers, giving them equipment like soldiers, dressing them up as soldiers, when are they going to pick up the mentality of soldiers?”— Arthur Rizer, former police officer

While the nation has been distracted by a media maelstrom dominated by news of white supremacists, Powerball jackpots, Hurricane Harvey, and a Mayweather v. McGregor fight, the American Police State has been carving its own path of devastation and destruction through what’s left of the Constitution.

We got sucker punched.

For now, the scope of the law is geographically limited to property near the Washington DC Metro system, but mark my words, this is just a way of testing the waters. Under the pretext of ensuring public safety by “inspecting” property in the vicinity of anything that could be remotely classified as impacting public safety, the government could gain access to almost any private property in the country.

Then President Trump, aided and abetted by his trusty Department of Justice henchman Jeff Sessions and to the delight of the nation’s powerful police unions, rolled back restrictions on the government’s military recycling program.

What this means is that police agencies, only minimally deterred by the Obama administration’s cosmetic ban on certain types of military gear, can now go hog-wild.

Clearly, we’re not in Mayberry anymore.

Or if this is Mayberry, it’s Mayberry in The Twilight Zone.

As journalist Benjamin Carlson stresses, “In today’s Mayberry, Andy Griffith and Barney Fife could be using grenade launchers and a tank to keep the peace.”

Contrast the idyllic Mayberry with the American police state of today, where local police—clad in jackboots, helmets and shields and wielding batons, pepper-spray, stun guns, and assault rifles—have increasingly come to resemble occupying forces in communities across the country.

As Alyssa Rosenberg writes for The Washington Post, “[The Andy Griffith Show] expressed an ideal that has leached out of American pop culture and public policy, to dangerous effect: that the police were part of the communities that they served and shared their fellow citizens’ interests. They were of their towns and cities, not at war with them.”

That’s really what this is about: a war on the American citizenry waged by local law enforcement armed to the teeth with weapons previously only seen on the battlefield

As investigative journalists Andrew Becker and G.W. Schulz reveal, “Many police, including beat cops, now routinely carry assault rifles. Combined with body armor and other apparel, many officers look more and more like combat troops serving in Iraq and Afghanistan.”

Thanks to Trump, this transformation of America into a battlefield is only going to get worse.

To be fair, Trump did not create this totalitarian nightmare. However, he has legitimized it and, in so doing, has also accelerated the pace at which we fall deeper into the clutches of outright tyranny.

Although these federal programs that allow the military to “gift” battlefield-appropriate weapons, vehicles and equipment to domestic police departments at taxpayer expense are being sold to communities as a benefit, the real purpose is to keep the defense industry churning out profits, bring police departments in line with the military, and establish a standing army.

It’s a militarized approach to make-work programs, except in this case, instead of unnecessary busy work to keep people employed, communities across America are finding themselves “gifted” with unnecessary drones, tanks, grenade launchers and other military equipment better suited to the battlefield in order to fatten the bank accounts of the military industrial complex.

In addition to being an astounding waste of taxpayer money, this equipping of police with military-grade equipment and weapons also gives rise to a dangerous mindset in which police adopt a warrior-like, more aggressive approach to policing.

The results are deadly.

As a study by researchers at Stanford University makes clear, “When law enforcement receives more military materials — weapons, vehicles and tools — it becomes … more likely to jump into high-risk situations. Militarization makes every problem — even a car of teenagers driving away from a party — look like a nail that should be hit with an AR-15 hammer.”

The danger of giving police high-power toys and weapons is that they will feel compelled to use it in all kinds of situations that would never normally warrant battlefield gear, weapons or tactics.

Suffice it to say, change will not come easily.

As I make clear in my book Battlefield America: The War on the American People, the police unions are a powerful force and they will not relinquish their power easily. Connect the dots and you’ll find that most, if not all, attempts to cover up police misconduct or sidestep accountability can be traced back to police unions and the police lobby.

Just look at Trump: he’s been on the police unions’ payroll from the moment they endorsed him for president, and he’s paid them back generously by ensuring that police can kill, shoot, taser, abuse and steal from American citizens with impunity.

Still, the responsibility rests with “we the people.”

As author Ta-Nehisi Coates reminds us:

The truth is that the police reflect America in all of its will and fear, and whatever we might make of this country’s criminal justice policy, it cannot be said that it was imposed by a repressive minority. The abuses that have followed from these policies—the sprawling carceral state, the random detention of black people, the torture of suspects—are the product of democratic will. And so to challenge the police is to challenge the American people who send them into the ghettos armed with the same self-generated fears that compelled the people who think they are white to flee the cities and into the Dream. The problem with the police is not that they are fascist pigs but that our country is ruled by majoritarian pigs.