Chaos in Charlottesville: No One Gave Peace a Chance, Including the Police 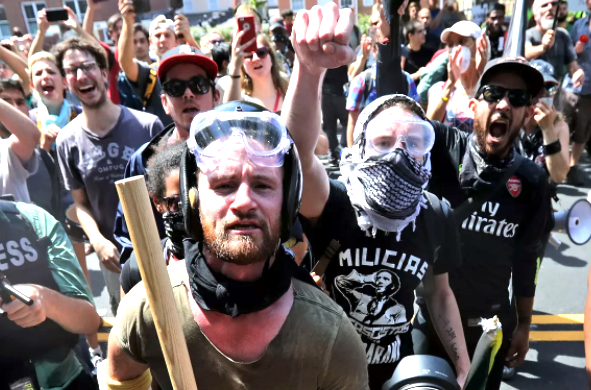 By John W. Whitehead: Let’s be clear about one thing: no one—not the armed, violent, militant protesters nor the police—gave peace a chance during the August 12 demonstrations in Charlottesville, Va. What should have been an exercise in free speech quickly became a brawl.

It’s not about who threw the first punch or the first smoke bomb.

It’s not about which faction outshouted the other, or which side perpetrated more violence, or even which group can claim to be the greater victim.

One young woman is dead because of the hate, violence, intolerance, racism and partisanship that is tearing this country apart, and it has to stop.

She was killed by a 20-year-old Neo-Nazi who drove his car into a crowd of pedestrians in Charlottesville, Va.

Words, no matter how distasteful or disagreeable, did not turn what should have been an exercise in free speech into a brawl.

That was accomplished by militant protesters on both sides of the debate who arrived at what should have been a nonviolent protest armed with sticks and guns, bleach bottles, balloons filled with feces and urine and improvised flamethrowers, and by the law enforcement agencies who stood by and allowed it.

As the New York Times reported, “Protesters began to mace one another, throwing water bottles and urine-filled balloons— some of which hit reporters — and beating each other with flagpoles, clubs and makeshift weapons. Before long, the downtown area was a melee. People were ducking and covering with a constant stream of projectiles whizzing by our faces, and the air was filled with the sounds of fists and sticks against flesh.”

The madness is spreading.

People I know—good, decent people who value equality, reject racism, and believe strongly in tolerance—in their grief and dismay and disgust, threatened violence, acted like a mob, and adopted similarly violent, intolerant, disorderly tactics as those they claim to oppose.

Those who defend free speech were castigated by those who believe that only certain views should be allowed to be heard.

Those who cling to nonviolence were outnumbered by angry mobs intent on inciting violence.

Those who normally advocate a message of tolerance gave into the temptation to spew hate and intolerance.

The Rutherford Institute and the ACLU, two organizations who repeatedly stand up for the Constitution and the rights of all people—no matter how disagreeable their views may be—have been cursed at, denounced and threatened with violence for daring to remind government officials (and members of the community) that the First Amendment applies to all people equally.

We are walking a dangerous road.

And then there’s the role police are supposed to play in upholding the law and preventing violence.

It’s a thankless job most of the time, and police must walk a fine line between respecting peaceful First Amendment activity and maintaining the peace, while not overstepping the limits of the Fourth Amendment.

For whatever reason—which only the police and government officials are privy to—the police failed to do their job at the Charlottesville demonstration, a charge levied by both the Alt Right and the counterdemonstrators.

Despite the fact that 1,000 first responders (including 300 state police troopers and members of the National Guard)—many of whom had been preparing for the downtown rally for months—had been called on to work the event, despite the fact that police in riot gear surrounded Emancipation Park on three sides, and despite the fact that Charlottesville had had what reporter David Graham referred to as “a dress rehearsal of sorts” a month earlier when 30 members of the Ku Klux Klan were confronted by 1000 counterprotesters, police failed to do their jobs.

In fact, as the Washington Post reports, police “seemed to watch as groups beat each other with sticks and bludgeoned one another with shields… At one point, police appeared to retreat and then watch the beatings before eventually moving in to end the free-for-all, make arrests and tend to the injured.”

So what should the police have done differently?

For starters, the police should have established clear boundaries—buffer zones—between the warring groups of protesters and safeguarded the permit zones.

Instead, as eyewitness accounts indicate, police established two entrances into the permit areas of the park and created barriers “guiding rallygoers single-file into the park” past lines of white nationalists and antifa counterprotesters.

There were other models that could have been followed.

As investigative reporter Sarah Posner notes, “At a neo-Nazi rally in Harrisburg, Pennsylvania, just days before the November election, police employed this tactic with success – while the rally attendees and anti-fascist protesters taunted each other over a barrier of police, they were blocked from coming into physical contact.”

In Cleveland, the site of the GOP presidential convention, “Trump diehards, Revolutionary Communists, Wobblies, and Alex Jones disciples” faced off in a downtown plaza. Yet as The Atlantic reports, “Just as confrontations between the groups seemed near to getting out of hand, police swooped into the square in huge numbers, using bicycles to create cordons between rival factions. The threat of violence soon passed, and no pepper spray or tear gas was needed.”

For that matter, consider that Charlottesville police established clear boundaries just a month earlier in which they maintained clear lines of demarcation at all times between KKK protesters and counterprotesters.

The question, as always, is where do we go from here?

It’s a question that Martin Luther King Jr. wrestled with and addressed in the last book he wrote before his assassination, Where Do We Go from Here: Chaos or Community?

And as I make clear in my book Battlefield America: The War on the American People, tyranny begets tyranny.

The lesson for all of us is this: remember, when you strip away the politics and the class warfare and the skin color and the religious ideology and the gender differences and the sexual orientation and anything else that can be used as a source of division, remember that underneath it all, we are all the same.

As Nelson Mandela recognized, “No one is born hating another person because of the color of his skin, or his background, or his religion. People must learn to hate, and if they can learn to hate, they can be taught to love, for love comes more naturally to the human heart than its opposite.”

“No wrongs have ever been righted by riots and civil disorders.”