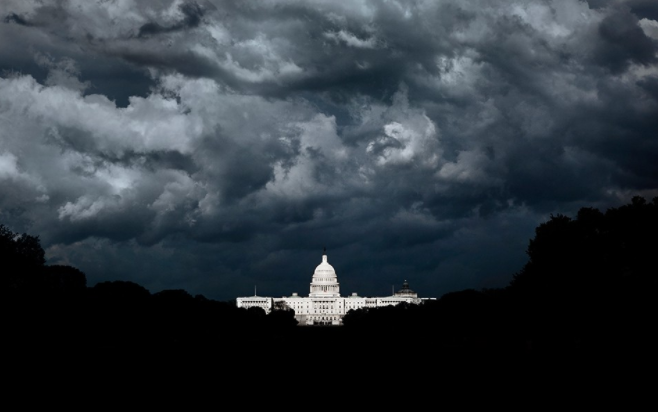 By John W Whitehead: Just in time for Christmas, the Deep State wants to give America the gift that keeps on giving: never-ending mass surveillance. I’m not referring to the kind of surveillance carried out by that all-knowing and all-seeing Jolly Old St. Nick and his informant the Elf on the Shelf (although, to be fair, they have helped to acclimate us to a world in which we’re always being watched and judged by higher authorities). No, this particular bit of Yuletide gift-giving comes courtesy of the Deep State (a.k.a. the Surveillance State, Police State, Shadow Government and black-ops spy agencies).

If this power-hungry cabal gets its way, the government’s power to spy on its citizens will soon be all-encompassing and permanent.
As it now stands, Section 702 of the Foreign Intelligence Surveillance Act—the legal basis for two of the National Security Agency’s largest mass surveillance programs, “PRISM” and “Upstream”—is set to expire at the end of 2017.
“PRISM” lets the NSA access emails, video chats, instant messages, and other content sent via Facebook, Google, Apple and others. “Upstream” lets the NSA worm its way into the internet backbone—the cables and switches owned by private corporations like AT&T that make the internet into a global network—and scan traffic for the communications of tens of thousands of individuals labeled “targets.”
Section 702 has been used as an end-run around the Constitution to allow the government to collect the actual content of Americans’ emails, phone calls, text messages and other electronic communication without a warrant.
Under Section 702, the government collects and analyzes over 250 million internet communications every year. There are estimates that at least half of these contain information about U.S. residents, many of whom have done nothing wrong.

This information is then shared with law enforcement and “routinely used for purposes unrelated to national security.” Mind you, Section 702 gives the government access to the very content of your conversations (phone calls, text messages, video chats), your photographs, your emails.

So beware of what you say, what you read, what you write, where you go, and with whom you communicate, because it will all be recorded, stored and used against you eventually, at a time and place of the government’s choosing. Privacy, as we have known it, is dead.
For all intents and purposes, we now have a fourth branch of government.

This fourth branch came into being without any electoral mandate or constitutional referendum, and yet it possesses superpowers, above and beyond those of any other government agency save the military. It is all-knowing, all-seeing and all-powerful. It operates beyond the reach of the president, Congress and the courts, and it marches in lockstep with the corporate elite who really call the shots in Washington, DC.

The government’s “technotyranny” surveillance apparatus has become so entrenched and entangled with its police state apparatus that it’s hard to know anymore where law enforcement ends and surveillance begins.
The short answer: they have become one and the same entity.
The police state has passed the baton to the surveillance state.
This hasn’t fazed President Trump who, much like his predecessors, has thus far marched in lockstep with the dictates of the police state.
For months, the Trump Administration has been actively lobbying Congress to reauthorize Section 702 in its entirety. Now, according to The Intercept, Trump is actively considering a proposal to establish his own global, private spy network that would circumvent official U.S. intelligence agencies and answer directly to the White House.
If approved, this would be yet another secret government agency carrying out secret surveillance and counterintelligence, funded by a secret black ops budget that by its very nature does away with transparency, bypasses accountability and completely eludes any form of constitutionality.
As if we weren’t being spied on enough already.
On any given day, the average American is now monitored, surveilled, spied on and tracked in more than 20 different ways by both government and corporate eyes and ears.
Every second of every day, the American people are being spied on by the U.S. government’s vast network of digital Peeping Toms, electronic eavesdroppers and robotic snoops.
Talk about a system rife for abuse.
Ask the government why it’s carrying out this warrantless surveillance on American citizens, and you’ll get the same Orwellian answer the government has been trotting out since 9/11 to justify its assaults on our civil liberties: to keep America safe.
Yet warrantless mass surveillance by the government and its corporate cohorts hasn’t made America any safer. And it certainly isn’t helping to preserve our freedoms. Frankly, America will never be safe as long as the U.S. government is allowed to shred the Constitution.
Now the government wants us to believe that we have nothing to fear from its mass spying program because they’re only looking to get the “bad” guys who are overseas.
Don’t believe it.
Warrantless mass surveillance of American citizens is wrong, un-American, and unconstitutional.
Clearly, the outlook for reforming the government’s unconstitutional surveillance programs does not look good.
As I make clear in my book Battlefield America: The War on the American People, whenever the rights of the American people are pitted against the interests of the military/corporate/security complex, “we the people” lose. Unless Congress develops a conscience—or suddenly remembers that they owe their allegiance to the citizenry and not the corporate state—we’re about to lose big.
It’s time to let Section 702 expire or reform the law to ensure that millions and millions of Americans are not being victimized by a government that no longer respects its constitutional limits.
Mark my words: if Congress votes to make the NSA’s vast spying powers permanent, it will be yet another brick in the wall imprisoning us within an electronic concentration camp from which there is no escape.