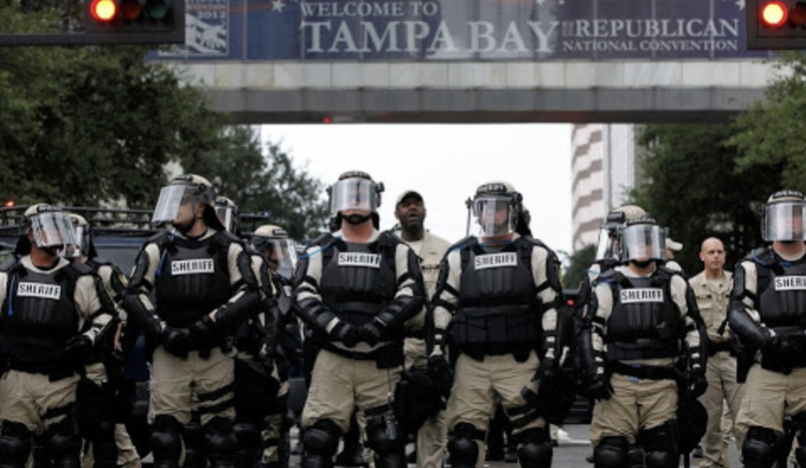 By John W Whitehead – US constitutional attorney, Charlottesville, Virginia: The zombie narrative was popularized by the hit television series The Walking Dead, in which a small group of Americans attempt to survive in a zombie-ridden, post-apocalyptic world where they’re not only fighting off flesh-eating ghouls but cannibalistic humans.

Understandably, zombie fiction plays to our fears and paranoia, while allowing us to “envision how we and our own would thrive if everything went to hell and we lost all our societal supports.” Yet as journalist Syreeta McFadden points out, while dystopian stories used to reflect our anxieties, now they reflect our reality, mirroring how we as a nation view the world around us, how we as citizens view each other, and most of all how our government views us.

Indeed, the U.S. government has spent a lot of time and energy in recent years using zombies as the models for a variety of crisis scenarios not too dissimilar from what we are currently experiencing.

For years now, the government has been carrying out military training drills using actors dressed as zombies as the enemy. In 2011, the DOD created a 31-page instruction manual for how to protect America from a terrorist attack carried out by zombie forces. In 2012, the CDC released a guide for surviving a zombie plague. That was followed by training drills for members of the military, police officers and first responders.

The zombie exercises appeared to be kitschy and fun—government agents running around trying to put down a zombie rebellion—but what if the zombies in the exercises were us, the citizenry, viewed by those in power as mindless, voracious, zombie hordes?

Take a look at the Defense Department’s battle plan for defeating an army of the walking dead.

You might find yourself tempted to giggle over the fact that a taxpayer-funded government bureaucrat actually took the time to research and write about vegetarian zombies, evil magic zombies, chicken zombies, space zombies, bio-engineered weaponized zombies, radiation zombies, symbiant-induced zombies, and pathogenic zombies.

However, in an age of extreme government paranoia, this is no laughing matter.

The DOD’s strategy for dealing with a zombie uprising, outlined in “CONOP 8888,” is for all intents and purposes a training manual for the government in how to put down a citizen uprising or at least an uprising of individuals “infected” with a dangerous disease or dangerous ideas about freedom.

Rest assured that the tactics and difficulties outlined in the “fictional training scenario” are all too real, beginning with martial law.

As the DOD training manual states: “zombies [stand-ins for “we the people”] are horribly dangerous to all human life and zombie infections have the potential to seriously undermine national security and economic activities that sustain our way of life. Therefore having a population that is not composed of zombies or at risk from their malign influence is vital to U.S. and Allied national interests.”

So how does the military plan to put down a zombie (a.k.a. citizen) uprising?

Phase 1 (Deter): Recognize that zombies cannot be deterred or reasoned with. Carry out training drills to discourage other countries from developing or deploying attack zombies and publicly reinforce the government’s ability to combat a zombie threat. Initiate intelligence sharing between federal and state agencies. Assist the Dept. of Homeland Security in identifying or discouraging immigrants from areas where zombie-related diseases originate.

Phase 2 (Seize initiative): Recall all military personal to their duty stations. Fortify all military outposts. Deploy air and ground forces for at least 35 days. Carry out confidence-building measures with nuclear-armed peers such as Russia and China to ensure they do not misinterpret the government’s zombie countermeasures as preparations for war. Establish quarantine zones. Distribute explosion-resistant protective equipment. Place the military on red alert. Begin limited scale military operations to combat zombie threats. Carry out combat operations against zombie populations within the United States that were “previously” U.S. citizens.

Phase 3 (Dominate): Lock down all military bases for 30 days. Shelter all essential government personnel for at least 40 days. Equip all government agents with military protective gear. Issue orders for military to kill all non-human life on sight. Initiate bomber and missile strikes against targeted sources of zombie infection, including the infrastructure. Burn all zombie corpses. Deploy military to lock down the beaches and waterways.

Phase 4 (Stabilize): Send out recon teams to check for remaining threats and survey the status of basic services (water, power, sewage infrastructure, air, and lines of communication). Execute a counter-zombie ISR plan to ID holdout pockets of zombie resistance. Use all military resources to target any remaining regions of zombie holdouts and influence. Continue all actions from the Dominate phase.

As I point out in my book, Battlefield America: The War on the American People, if there is any lesson to be learned, it is simply this: whether the threat to national security comes in the form of imaginary zombies, actual terrorists, American citizens infected with the coronavirus, or disgruntled American citizens infected with dangerous ideas about freedom, the government’s response to such threats remains the same: detect, deter and annihilate.

Constitutional attorney and author John W. Whitehead is founder and president of The Rutherford Institute.

(Main image – Tampa Bay Times: US Tampa Bay police ready for a fight with protestors at a political rally)