The Iron Jaws of the Police State: Trump’s America Is a Constitution-Free Zone 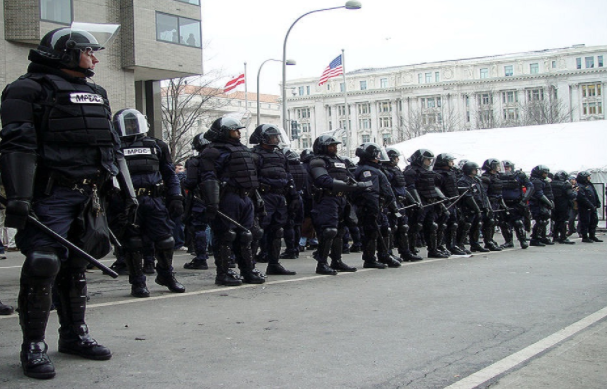 By John W. Whitehead: Please. Somebody give Attorney General Jeff Sessions a copy of the Constitution. And while you’re at it, get a copy to President Trump, too. In fact, you might want to share a copy with the nation’s police officers, as well.

I have my doubts that any of these individuals—all of whom swore to uphold and defend the Constitution—have ever read any of the nation’s founding documents.

Had they actually read and understood the Declaration of Independence, Constitution and Bill of Rights, there would be no militarized police, no mass surveillance, no police shootings of unarmed individuals, no SWAT team raids, no tasering of children, no asset forfeiture schemes or any of the other government-sanctioned abuses that get passed off as law and order these days.

Just take the policing crisis in this country, for instance.

Sessions—the chief lawyer for the government and the head of the Justice Department, which is entrusted with ensuring that the nation’s laws are faithfully carried out and holding government officials accountable to abiding by their oaths of office to “uphold and defend the Constitution”—doesn’t think we’ve got a policing problem in America.

In fact, Sessions thinks the police are doing a great job (apart from “the individual misdeeds of bad actors,” that is).

For that matter, so does Trump.

Indeed, Sessions thinks the nation’s police forces are doing such a great job that they should be rewarded with more military toys (weapons, gear, equipment) and less oversight by the Justice Department.

Excuse me for a moment while I flush what remains of the Constitution down the toilet.

Clearly, Sessions has not been briefed on the fact that it has never been safer to be a cop in America. According to Newsweek, “It’s safer to be a cop than it is to be a fisher, logger, pilot, roofer, miner, trucker or taxi driver.”

Being a citizen of the American police state.

Treating cops as deserving of greater protections than their fellow citizens.

And training cops to think and act like they’re soldiers on a battlefield.

As journalist Daniel Bier warns, “If you tell cops over and over that they’re in a war, they’re under siege, they’re under attack, and that citizens are the enemy—instead of the people they’re supposed to protect—you’re going to create an atmosphere of fear, tension, and hostility that can only end badly, as it has for so many people.”

Frankly, if there’s a war taking place in this country, it’s a war on the American people.

After all, we’re the ones being shot at and tasered and tracked and beaten and intimidated and threatened and invaded and probed.

And what is the government doing to fix this policing crisis that threatens the safety of every man, woman and child in this country?

Not a damn thing.

Incredibly, according to a study by the American Medical Association, police-inflicted injuries send more than 50,000 Americans to hospital emergency rooms every year.

Yet as Slate warns, if you even dare to criticize a police officer let alone challenge the myth of the hero cop—a myth “used to legitimize brutality as necessary, justify policies that favor the police, and punish anyone who dares to question police tactics or oppose the unions’ agendas”— you will be roundly denounced “as disloyal, un-American, and dangerous.”

As reporter David Feige concludes, “We should appreciate the value and sacrifice of those who choose to serve and protect. But that appreciation should not constitute a get-out-of-jail-free card for the vast army of 800,000 people granted general arrest powers and increasingly armed with automatic weapons and armored vehicles.”

The fact that police are choosing to fatally resolve encounters with their fellow citizens by using their guns speaks volumes about what is wrong with policing in America today, where police officers are being dressed in the trappings of war, drilled in the deadly art of combat, and trained to look upon “every individual they interact with as an armed threat and every situation as a deadly force encounter in the making.”

Mind you, the federal government is the one responsible for turning our police into extensions of the military, having previously distributed billions of dollars’ worth of military equipment to local police agencies, including high-powered weapons, assault vehicles, drones, tactical gear, body armor, weapon scopes, infrared imaging systems and night-vision goggles—equipment intended for use on the battlefield—not to mention federal grants for militarized training and SWAT teams.

Thus, despite what Attorney General Sessions wants you to believe, the daily shootings, beatings and roadside strip searches (in some cases, rape) of American citizens by police are not random occurrences, accidents or isolated, anecdotal examples of a few bad actors.

Rather, as I make clear in my book Battlefield America: The War on the American People, this is what happens when you allow so-called “law and order” to matter more than justice: corruption flourishes, injustice reigns and tyranny takes hold.

Yet no matter what Trump and Session seem to believe, nowhere in the Constitution does it say that Americans must obey the government.

Despite the corruption of Congress and the complicity of the courts, nowhere does the Constitution require absolute subservience to the government’s dictates.

And despite what most police officers seem to believe, nowhere does the Constitution state that Americans must comply with a police order.

To suggest otherwise is authoritarianism.

This is also, as abolitionist Frederick Douglass noted, the definition of slavery: “I didn’t know I was a slave until I found out I couldn’t do the things I wanted.”

You want to know what it means to be a slave in the American police state?

It means being obedient, compliant and Sieg Heil!-ing every government agent armed with a weapon. If you believe otherwise, try standing up for your rights, being vocal about your freedoms, or just challenging a government dictate, and see how long you last before you’re staring down the barrel of a loaded government-issued gun.

JOHN W. WHITEHEAD is a Constitutional attorney and founder and president of The Rutherford Institute. His new book Battlefield America: The War on the American People (Select Books, 2015) is available online at www.amazon.com. Whitehead can be contacted at johnw@rutherford.org.