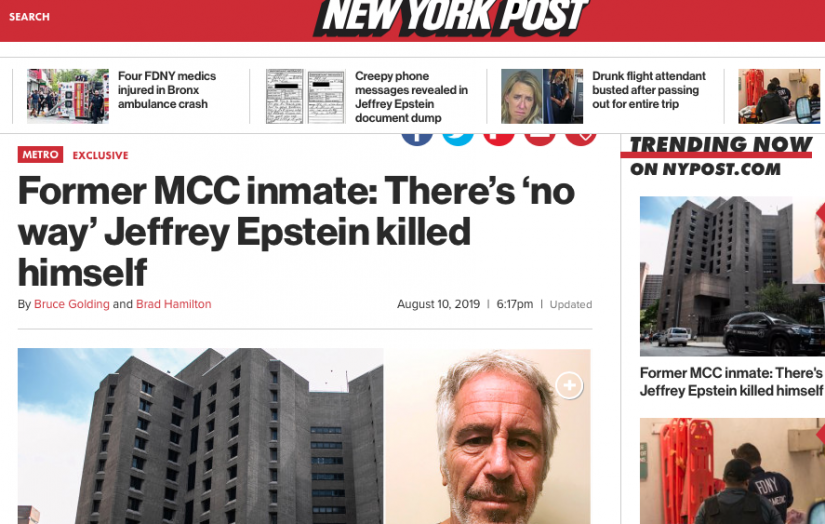 Richard Hofstadter, a great American historian, once posited that American politics was vulnerable to a “paranoid style” that is defined by “heated exaggeration, suspiciousness, and conspiratorial fantasy”. He is, of course, dead right.

The trouble with America is that their society is injected with huge societal stories of propaganda and fake news that end up destroying faith and trust in every institution in the country. No-one believes anyone anymore.

Conspiracy theories that ended up becoming facts such as government mind control programmes, and then events such as the assassination of Martin Luther King or the killing of Kennedy  or more recently 9/11 – where more than half of American’s no longer believe the official government story, now leave a country deeply suspicious of government, the state, the judiciary, media and the police.

And if ever there was a story to fuel a nation of paranoids, conspiracy theorists and political finger-pointing, it would the death of Jefferey Epstein.

In brief. A billionaire is in prison awaiting the unsealing of a pile of damning documents. They will show his connections to the rich and powerful in a huge sex trafficking/paedophile scandal that has the potential to destabilise trust even further in the elite – is found dead. The circumstances of his death in a high security, isolated, suicide watch cell are, at best, deeply suspicious.

Here is what is being said over there in America.

The Clinton body count was bound to emerge again and is now trending nicely: 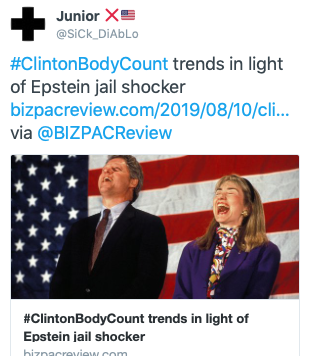 Some are saying that the Clinton body count is ‘way too big to dismiss as a conspiracy theory.

There is indeed a lot of fake news in America. But hang on a minute, the President has something to say.

Donald Trump has massively ramped up the conspiracy theories.  Twitter accounts are now in overdrive. It is unbelievable that Trump has even retweeted one about the Clinton body count. I’ve looked as I didn’t believe even he would be that mindless. But he is. For the POTUS this must surely rank as one of his most stupid tweets ever. This one has 43,000 retweets and is racking them up at the rate of 1,000 an hour. After just 5 hours later it had 15,000 twitter likes as well. 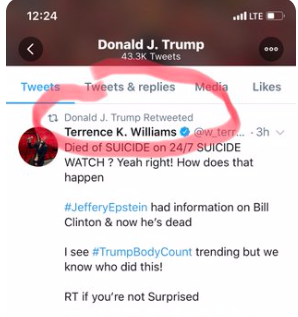 The ex-convict, who spoke to The Post’s Brad Hamilton and Bruce Golding on the condition of anonymity, spent several months in the 9 South special housing unit for high-profile prisoners awaiting trial — like Epstein. He said:

There’s no way that man could have killed himself. I’ve done too much time in those units. It’s an impossibility.

Between the floor and the ceiling is like eight or nine feet. There’s no way for you to connect to anything.

You have sheets, but they’re paper level, not strong enough. He was 200 pounds — it would never happen.

When you’re on suicide watch, they put you in this white smock, a straight jacket. They know a person cannot be injurious to themselves.

The clothing they give you is a jump-in uniform. Everything is a dark brown color.

Could he have done it from the bed? No sir. There’s a steel frame, but you can’t move it. There’s no light fixture. There’s no bars.

They don’t give you enough in there that could successfully create an instrument of death. You want to write a letter, they give you rubber pens and maybe once a week a piece of paper.

Nothing hard or made of metal.

And there’s a cop at the door about every nine minutes, whether you’re on suicide watch or not.

There’s up to 80 people there. They could put two in cell. It’s one or two, but I’ll never believe this guy had a cellmate. He was too blown up.

CNN is not convinced this is an open and shut case of suicide. In brief, they think, he was possibly assaulted, then put on suicide watch, then taken off to then put in isolation.

It was only three weeks ago that Epstein, who pleaded not guilty to sex trafficking charges, was found in his jail cell with marks on his neck. Sources told CNN, Epstein was initially placed on suicide watch after he sustained the neck injuries on July 23, but was taken off and cleared by the end of the month to return to the Special Housing Unit (SHU), a place where inmates are sent when they get into trouble or need to be isolated from the general population.

Why was Epstein taken off suicide watch so soon? Why was he not monitored more closely in the SHU where he was held? And given the nature of the charges against him and the other powerful, high profile individuals whose names have been linked to his case, was this all a mistake or something more nefarious? 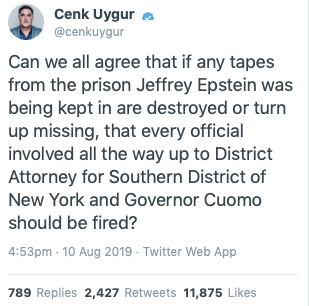 Judicial Watch has confirmed it is also going to investigate. Its Twitter followers number 1.2 million. Largely speaking – they will go to protect their President – so only god himself knows what’s happened in that cell – well, maybe some others.

Political commentator Ricky Davila with 300,000 followers thinks, like millions of others in America that the Attorney General William Barr is working on his cover-up as we read this: 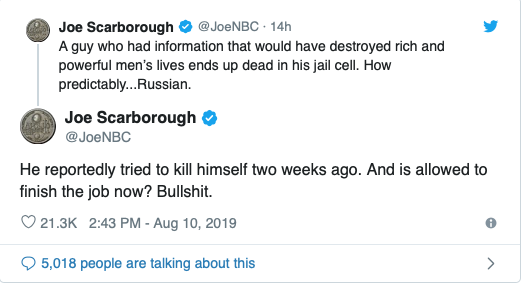 Of course, no self-respecting nation full of conspiracy theorisers could possibly discount Russia as the main bogey man in the death of a man in a locked solitary confinement cell, surrounded by prison guards eh?

Clearly, Fox News is not convinced at all – they are distributing the mainstream narrative that Epstein was possibly murdered. It’s in the language they use in their lead story.

The stories, the misinformation, disinformation and propaganda will be driven by political lies amid more stories of a cover-up. One thing you can be sure of in this case as a single fact – you will never really know what really happened. It is, let’s be honest … a very American story!