Note from USA: The A to Z of the American Police State 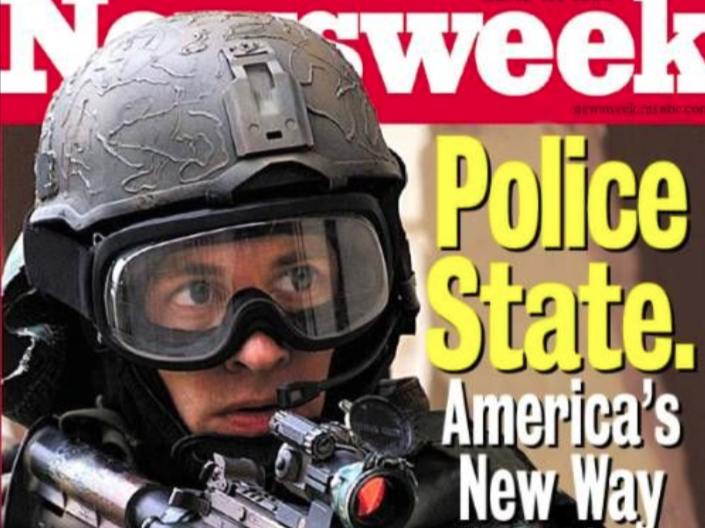 By John W Whitehead – Constitutional Attorney, Charlottesville, Virginia: What characterizes American government today is not so much dysfunctional politics as it is ruthlessly contrived governance carried out behind the entertaining, distracting and disingenuous curtain of political theatre. And what political theatre it is, diabolically Shakespearean at times, full of sound and fury, yet in the end, signifying nothing.

Played out on the national stage and eagerly broadcast to a captive audience by media sponsors, this farcical exercise in political theatre can, at times, seem riveting, life-changing and suspenseful, even for those who know better.

Week after week, the script changes (Donald Trump’s Tweets, Congress’ hearings on Robert Mueller’s Russia probe, the military’s endless war drums, the ever-widening field of candidates for the 2020 presidential race, etc.) with each new script following on the heels of the last, never any let-up, never any relief from the constant melodrama.

The players come and go, the protagonists and antagonists trade places and the audience members are quick to forget past mistakes and move on to the next spectacle.

All the while, a different kind of drama is unfolding in the dark backstage, hidden from view by the heavy curtain, the elaborate stage sets, coloured lights and parading actors.

Such that it is, the realm of political theatre with all of its drama, vitriol and scripted theatrics is what passes for “transparent” government today, with elected officials, entrusted to act in the best interests of their constituents, routinely performing for their audiences and playing up to the cameras, while doing very little to move the country forward.

Yet behind the footlights, those who really run the show are putting into place policies which erode our freedoms and undermine our attempts at contributing to the workings of our government, leaving us none the wiser and bereft of any opportunity to voice our discontent or engage in any kind of discourse until it’s too late.

None of the dangers posed by the government and its henchmen have dissipated. They have merely disappeared from our televised news streams.

In the interest of liberty and truth, here’s an A-to-Z primer to spell out the grim realities of life in the American Police State that no one is talking about anymore.

A is for the AMERICAN POLICE STATE. A police state “is characterized by bureaucracy, secrecy, perpetual wars, a nation of suspects, militarization, surveillance, widespread police presence, and a citizenry with little recourse against police actions.”

B is for our battered BILL OF RIGHTS.

C is for CIVIL ASSET FORFEITURE, which allows government agents to seize and keep private property whether or not any crime has actually taken place.

D is for DRONES equipped with lasers, tasers and scanning devices, all aimed at “we the people.”

E is for ELECTRONIC CONCENTRATION CAMP, a.k.a., the surveillance state.

F is for FASCISM. A Princeton study concluded that the U.S. government is an oligarchy (ruled by a wealthy elite). We are moving fast towards fascism, a form of government where private corporate interests rule, money calls the shots, and the people are seen as mere economic units.

G is for GRENADE LAUNCHERS, part of the more than $18 billion worth of battlefield-appropriate military weapons, vehicles and equipment distributed to domestic police departments across the country.

H is for HOLLOW-POINT BULLETS, which have been stockpiled by the Department of Homeland Security and the Social Security Administration.

I is for the INTERNET OF THINGS, a “connected” industry that propels us closer to a future where a person’s biometrics can be used to track their movements, target them for advertising, and keep them under perpetual surveillance.

J is for JAILING FOR PROFIT, a $70 billion private prison industry that relies on the complicity of state governments to keep their privately run prisons full by jailing large numbers of Americans for inane crimes.

K is for KENTUCKY V. KING, a Supreme Court ruling that gives police the green light to break into homes, without a warrant, even if it’s the wrong home as long as they think they have a reason to do so.

L is for LICENSE PLATE READERS, which enable law enforcement and private agencies to track the whereabouts of vehicles, and their occupants, all across the country.

M is for MAIN CORE, a database of names and information to be used by the government in times of national emergency or under martial law to locate and round up Americans seen as threats to national security.

N is for NO-KNOCK RAIDS, of which more than 80,000 are carried out every year.

O is for OVERCRIMINALIZATION, which renders every American a criminal.

P is for PATHOCRACY: tyranny at the hands of a psychopathic government, which “operates against the interests of its own people except for favoring certain groups.”

Q is for QUALIFIED IMMUNITY, which allows officers to walk away without paying a dime for their wrongdoing.

R is for ROADSIDE STRIP SEARCHES and BLOOD DRAWS.

S is for the SURVEILLANCE STATE.

T is for TASERS, which have been used by police as weapons of compliance more often and with less restraint—even against women and children—and in some instances, even causing death.

U is for UNARMED CITIZENS SHOT BY POLICE.

V is for VIPR SQUADS, which carry out “soft target” security inspections whenever and wherever the government deems appropriate, at random times and places, and without needing the justification of a particular threat.

W is for WHOLE-BODY SCANNERS, which are being used not only to “see” through your clothes but to spy on you within the privacy of your home.

X is for X-KEYSCORE, one of the many spying programs carried out by the National Security Agency that targets every person in the United States who uses a computer or phone.

Y is for YOU-NESS. Facial recognition software promises to create a society in which every individual who steps out into public is tracked and recorded as they go about their daily business.

Z is for ZERO TOLERANCE in which young people are increasingly viewed as suspects and treated as criminals, often for engaging in little more than childish behavior.

As I make clear in my book Battlefield America: The War on the American People, the reality we must come to terms with is that in the post-9/11 America we live in today, the government does whatever it wants, freedom be damned.

We have moved beyond the era of representative government and entered a new age You can call it the age of authoritarianism. Or fascism. Or oligarchy. Or the American police state.

Whatever label you want to put on it, the end result is the same: tyranny.

Constitutional attorney and author John W. Whitehead is founder and president of The Rutherford Institute. His new book Battlefield America: The War on the American People is available at www.amazon.com. Whitehead can be contacted at johnw@rutherford.org.