US: Rule by Brute Force – The True Nature of Government 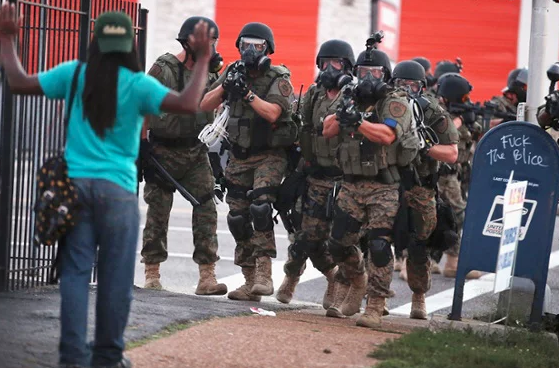 By John W. Whitehead – All of the imperial powers amassed by Barack Obama and George W. Bush—to kill American citizens without due process, to detain suspects indefinitely, to strip Americans of their citizenship rights, to carry out mass surveillance on Americans without probable cause, to suspend laws during wartime, to disregard laws with which he might disagree, to conduct secret wars and convene secret courts, to sanction torture, to sidestep the legislatures and courts with executive orders and signing statements, to direct the military to operate beyond the reach of the law, to act as a dictator and a tyrant, above the law and beyond any real accountability—have been inherited by Donald Trump.

Whatever kind of president Trump chooses to be, he now has the power to completely alter the landscape of this country for good or for ill.

He has this power because every successive occupant of the Oval Office has been allowed to expand the reach and power of the presidency through the use of executive orders, decrees, memorandums, proclamations, national security directives and legislative signing statements that can be activated by any sitting president.

Those of us who saw this eventuality coming have been warning for years about the growing danger of the Executive Branch with its presidential toolbox of terror that could be used—and abused—by future presidents.

The groundwork, we warned, was being laid for a new kind of government where it won’t matter if you’re innocent or guilty, whether you’re a threat to the nation or even if you’re a citizen. What will matter is what the president—or whoever happens to be occupying the Oval Office at the time—thinks. And if he or she thinks you’re a threat to the nation and should be locked up, then you’ll be locked up with no access to the protections our Constitution provides. In effect, you will disappear.

First, we sounded the alarm over George W. Bush’s attempts to gut the Constitution, suspend habeas corpus, carry out warrantless surveillance on Americans, and generally undermine the Fourth Amendment, but the Republicans didn’t want to listen because Bush was a Republican.

Then we sounded the alarm over Barack Obama’s prosecution of whistleblowers, targeted drone killings, assassinations of American citizens, mass surveillance, and militarization of the police, but the Democrats didn’t want to listen because Obama was a Democrat and he talked a really good game.

It well may be that by the time Americans­—Republicans and Democrats alike—stop playing partisan games and start putting some safeguards in place, it will be too late.

Still, as tempting as it may be, don’t blame Donald Trump for what is to come.

If this nation eventually locks down… If Americans are rounded up and detained based on the color of their skin, their religious beliefs, or their political views… If law-and-order takes precedence over constitutional principles…

Please, resist the urge to lay all the blame at Trump’s feet.

After all, President Trump didn’t create the police state.

He merely inherited it.

As long as we continue to put our politics ahead of our principles—moral, legal and constitutional—“we the people” will lose.

And you know who will keep winning by playing on our prejudices, capitalizing on our fears, deepening our distrust of our fellow citizens, and dividing us into polarized, warring camps incapable of finding consensus on the one true menace that is an immediate threat to all of our freedoms? The U.S. government.

When we lose sight of this true purpose of government—to protect our rights—and fail to keep the government in its place as our servant, we allow the government to overstep its bounds and become a tyrant that rules by brute force.

As Ayn Rand explains in her essay on “The Nature of Government”:

That’s about as good a description as you’ll find for the sorry state of our republic.

SWAT teams crashing through doors. Militarized police shooting unarmed citizens. Traffic cops tasering old men and pregnant women for not complying fast enough with an order. Resource officers shackling children for acting like children. Citizens being jailed for growing vegetable gardens in their front yards and holding prayer services in their backyards. Drivers having their cash seized under the pretext that they might have done something wrong.

The list of abuses being perpetrated against the American people by their government is growing rapidly.

We are approaching critical mass.

As I make clear in my book Battlefield America: The War on the American People, it may already be too late to save our republic. We have passed the point of easy fixes. When the government and its agents no longer respect the rule of law—the Constitution—or believe that it applies to them, then the very contract on which this relationship is based becomes invalid.

Do you really want to save America?

The only thing that will save us now is a concerted, collective commitment to the Constitution’s principles of limited government, a system of checks and balances, and a recognition that they—the president, Congress, the courts, the military, the police, the technocrats and plutocrats and bureaucrats—work for us.

Author John W. Whitehead is a constitutional lawyer, founder and president of The Rutherford Institute. His new book Battlefield America: The War on the American People (SelectBooks, 2015) is available online at www.amazon.com.