U.S. Death at Your Door: Knock-and-Talk Police Tactics Rip a Hole in the Constitution 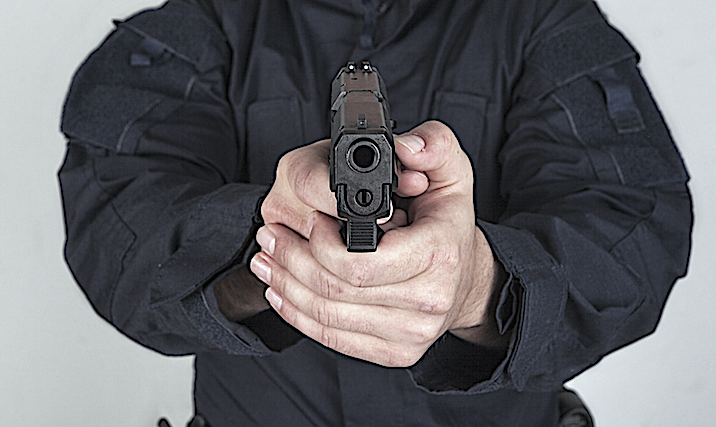 By John W Whitehead: It’s 1:30 a.m., a time when most people are asleep. Your neighbourhood is in darkness, except for a few street lamps. Someone—he doesn’t identify himself and the voice isn’t familiar—is pounding on your front door, demanding that you open up. Your heart begins racing. Your stomach is tied in knots. The adrenaline is pumping through you. You fear that it’s an intruder or worse. You not only fear for your life, but the lives of your loved ones.

The aggressive pounding continues, becoming more jarring with every passing second. Desperate to protect yourself and your loved ones from whatever threat awaits on the other side of that door, you scramble to lay hold of something—anything—that you might use in self-defence. It might be a flashlight, a baseball bat, or that licensed and registered gun you thought you’d never need. You brace for the confrontation, a shaky grip on your weapon, and approach the door cautiously. The pounding continues.

You open the door to find a shadowy figure aiming a gun in your direction. Immediately, you back up and retreat further into your apartment. At the same time, the intruder opens fire, sending a hail of bullets in your direction. Three of the bullets make contact. You die without ever raising your weapon or firing your gun in self-defence. In your final moments, you get a good look at your assailant: it’s the police.

This is what passes for “knock-and-talk” policing in the American police state.

Whatever you call it, this aggressive, excessive police tactic has become a thinly veiled, warrantless exercise by which citizens are coerced and intimidated into “talking” with heavily armed police who “knock” on their doors in the middle of the night.

Poor Andrew Scott didn’t even get a chance to say no to such a heavy-handed request before he was gunned down by police in a scenario almost exactly like the one described above.

It was late on a Saturday night—so late that it was technically Sunday morning—and 26-year-old Scott was at home with his girlfriend playing video games when police, in pursuit of a speeding motorcyclist, arrived at Scott’s apartment complex, assumed tactical positions with guns drawn and ready to shoot, and began pounding on his apartment door (because it had a light on and there was a motorcycle parked nearby).

Understandably alarmed by the aggressive pounding on his door at such a late hour, Scott retrieved his handgun before opening the door. Upon opening the door, Scott saw a shadowy figure holding a gun outside his door.

Police failed to identify themselves.

Unnerved by the sight of the gunman, Scott retreated into his apartment only to have police immediately open fire on him. Of the six shots fired, three hit and killed Scott, who had no connection to the motorcycle or any illegal activity.

So who was at fault here?

Was it Andrew Scott, who was prepared to defend himself and his girlfriend against a possible late-night intruder?

Was it the police officers who banged on the wrong door in the middle of the night, failed to identify themselves, and then—without asking any questions or attempting to de-escalate the situation—shot and killed an innocent man?

Was it the courts, which not only ruled that the police had qualified immunity against being sued for Scott’s murder but also concluded that Andrew Scott provoked the confrontation by retrieving a lawfully-owned handgun before opening the door?

Or was it the whole crooked system that’s to blame? I’m referring to the courts that continue to march in lockstep with the police state, the police unions that continue to strong-arm politicians into letting the police agencies literally get away with murder, the legislators who care more about getting re-elected than about protecting the rights of the citizenry, the police who are being trained to view their fellow citizens as enemy combatants on a battlefield, and the citizenry who fail to be alarmed and outraged every time the police state shoots another hole in the Constitution.

What happened to Andrew Scott was not an isolated incident.

These knock-and-talk cases have grown legion.

Police insist that there’s nothing coercive about these tactics. Yet whether police are knocking on your door at 2 am or 2:30 pm, as long as you’re being “asked” to talk to a police officer who is armed to the teeth and inclined to kill at the least provocation, you don’t really have much room to resist, not if you value your life.

Mind you, these knock-and-talk searches are little more than police fishing expeditions carried out without a warrant.

The goal is intimidation and coercion.

We’ve already seen a dramatic rise in the number of home invasions by battle-ready SWAT teams and police who have been transformed into extensions of the military. Indeed, with every passing week, we hear more and more horror stories in which homeowners are injured or killed simply because they mistook a SWAT team raid by police for a home invasion by criminals.

Never mind that the unsuspecting homeowner, woken from sleep by the sounds of a violent entry, has no way of distinguishing between a home invasion by a criminal as opposed to a government agent. Too often, the destruction of life and property wrought by the police is no less horrifying than that carried out by criminal invaders.

As I make clear in my book Battlefield America: The War on the American People, these incidents underscore a dangerous mindset in which civilians (often unarmed and defenseless) not only have less rights than militarized police, but also one in which the safety of civilians is treated as a lower priority than the safety of their police counterparts (who are armed to the hilt with an array of lethal and nonlethal weapons).

Winston Churchill once declared that “democracy means that if the doorbell rings in the early hours, it is likely to be the milkman.”

Clearly, we don’t live in a democracy.

No, in the American police state, when you find yourself woken in the early hours by someone pounding on your door, smashing through your door, terrorizing your family, killing your pets, and shooting you if you dare to resist in any way, you don’t need to worry that it might be burglars out to rob and kill you: it’s just the police.