USA – “Anything Goes” When You’re the Police in America 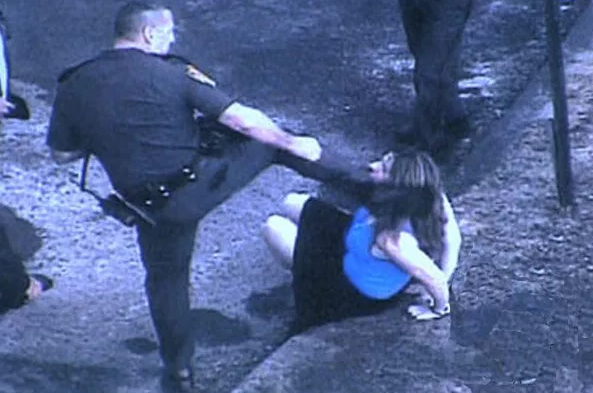 “There is one criminal justice system for citizens—especially black and brown ones—and another for police in the United States.”—Redditt Hudson, former St. Louis police officer

President Trump needs to be reminded that no one is above the law, especially the police.

Unfortunately, Trump and Jeff Sessions, head of the Justice Department (much like their predecessors) appear to have few qualms about giving police the green light to kill, shoot, taser, abuse and steal from American citizens in the so-called name of law and order.

Between Trump’s pandering to the police unions and Sessions’ pandering to Trump, this constitutionally illiterate duo has opened the door to a new era of police abuses.

As senior editor Adam Serwer warns in The Atlantic, “When local governments violate the basic constitutional rights of citizens, Americans are supposed to be able to look to the federal government to protect those rights. Sessions has made clear that when it comes to police abuses, they’re now on their own. This is the principle at the heart of ‘law and order’ rhetoric: The authorities themselves are bound by neither.”

Brace yourselves: things are about to get downright ugly.

By shielding police from charges of grave misconduct while prosecuting otherwise law-abiding Americans for the most trivial “offenses,” the government has created a world in which there are two sets of laws: one set for the government and its gun-toting agents, and another set for you and me.

No matter which way you spin it, “we the people” are always on the losing end of the deal.

If you’re a cop in the American police state, you can now break the law in a myriad of ways without suffering any major, long-term consequences.

Indeed, not only are cops protected from most charges of wrongdoing—whether it’s shooting unarmed citizens (including children and old people), raping and abusing young women, falsifying police reports, trafficking drugs, or soliciting sex with minors—but even on the rare occasions when they are fired for misconduct, it’s only a matter of time before they get re-hired again.

For example, Oregon police officer Sean Sullivan was forced to resign after being accused of “grooming” a 10-year-old girl for a sexual relationship. A year later, Sullivan was hired on as a police chief in Kansas.

St. Louis police officer Eddie Boyd III was forced to resign after a series of incidents in which he “pistol-whipped a 12-year-old girl in the face in 2006, and in 2007 struck a child in the face with his gun or handcuffs before falsifying a police report,” he was quickly re-hired by another Missouri police department.

Much of the “credit” for shielding these rogue cops goes to influential police unions and laws providing for qualified immunity, police contracts that “provide a shield of protection to officers accused of misdeeds and erect barriers to residents complaining of abuse,” state and federal laws that allow police to walk away without paying a dime for their wrongdoing, and rampant cronyism among government bureaucrats.

Whether it’s at the federal level with President Trump, Congress and the Judiciary, or at the state and local level, those deciding whether a police officer should be immune from having to personally pay for misbehavior on the job all belong to the same system, all with a vested interest in protecting the police and their infamous code of silence: city and county attorneys, police commissioners, city councils and judges.

It’s a pretty sweet deal if you can get it, I suppose: protection from the courts, immunity from wrongdoing, paid leave while you’re under investigation, the assurance that you won’t have to spend a dime of your own money in your defense, the removal of disciplinary charges from your work file, and then the high probability that you will be rehired and returned to the streets.

It’s a chilling prospect, isn’t it?

According to the New York Times, “Some experts say thousands of law enforcement officers may have drifted from police department to police department even after having been fired, forced to resign or convicted of a crime.”

It’s happening all across the country.

This is how perverse justice in America has become.

Incredibly, while our own protections against government abuses continue to be dismantled, a growing number of states are adopting Law Enforcement Officers’ Bill of Rights (LEOBoR)—written by police unions—which provides police officers accused of a crime with special due process rights and privileges not afforded to the average citizen.

In other words, the LEOBoR protects police officers from being treated as we are treated during criminal investigations.

Not only are officers given a 10-day “cooling-off period” during which they cannot be forced to make any statements about the incident, but when they are questioned, it must be “for a reasonable length of time, at a reasonable hour, by only one or two investigators (who must be fellow policemen), and with plenty of breaks for food and water.”

These LEOBoRs epitomize everything that is wrong with America today.

Now once in a while, police officers engaged in wrongdoing are actually charged for abusing their authority and using excessive force against American citizens.

Occasionally, those officers are even sentenced for their crimes against the citizenry.

Yet in just about every case, it’s still the American taxpayer who foots the bill.

Human Rights Watch notes that taxpayers actually pay three times for officers who repeatedly commit abuses: “once to cover their salaries while they commit abuses; next to pay settlements or civil jury awards against officers; and a third time through payments into police ‘defense’ funds provided by the cities.”

This is a recipe for disaster.

“In a democratic society,” observed Oakland police chief Sean Whent, “people have a say in how they are policed.”

Yet as I point out in my book Battlefield America: The War on the American People, America is a constitutional republic, not a democracy, which means that “we the people” not only have a say in how we are policed—we are the chiefs of police.