USA: Freedom for the Speech We Hate: The Legal Ins and Outs of the Right to Protest 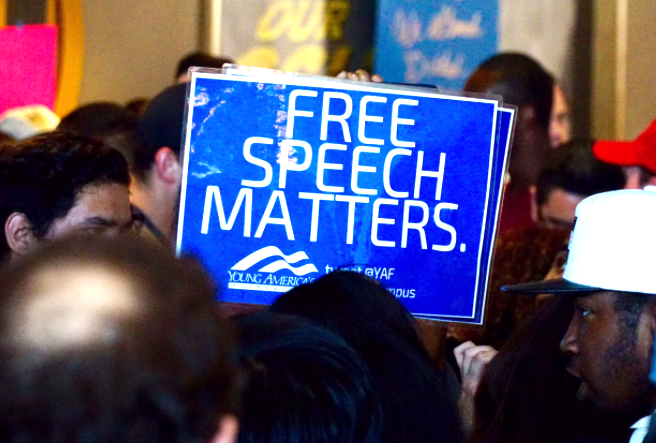 “If there is any principle of the Constitution that more imperatively calls for attachment than any other, it is the principle of free thought — not free thought for those who agree with us but freedom for the thought that we hate.”— Supreme Court Justice Oliver Wendell Holmes

James Madison, the father of the Constitution, was very clear about the fact that he wrote the First Amendment to protect the minority against the majority.

What Madison meant by minority is “offensive speech.”

Unfortunately, we don’t honor that principle as much as we should today. In fact, we seem to be witnessing a politically correct philosophy at play, one shared by both the extreme left and the extreme right, which aims to stifle all expression that doesn’t fit within their parameters of what they consider to be “acceptable” speech.

As a result, we have seen the caging of free speech in recent years, through the use of so-called “free speech zones” on college campuses and at political events, the requirement of speech permits in parks and community gatherings, and the policing of online forums.

Instead of encouraging people to debate issues and air their views, by muzzling free speech, we are contributing to a growing underclass of Americans who are being told that they can’t take part in American public life unless they “fit in.”

This attempt to stifle certain forms of speech is where we go wrong.

As always, knowledge is key.

The following Constitutional Q&A, available in more detail at The Rutherford Institute (www.rutherford.org), is a good starting point.

A:         The First Amendment prohibits the government from “abridging the freedom of speech, or of the press; or the right of the people peaceably to assemble, and to petition the government for a redress of grievances.” Protesting is an exercise of these constitutional rights because it involves speaking out, by individual people or those assembled in groups, about matters of public interest and concern.

A:         The right to protest generally extends to public places that are owned and controlled by the government, although not all government-owned property is available for exercising speech and assembly rights. Places historically associated with the free exercise of expressive activities, such as streets, sidewalks and parks, are traditional public forums and the government’s power to limit speech and assembly in those places is very limited. However, expression and assembly in traditional public forums may be limited by reasonable time, place and manner regulations. Examples of reasonable regulations include restrictions on the volume of sound produced by the activity or a prohibition on impeding vehicle and pedestrian traffic.

Q:        CAN MY FREE SPEECH BE RESTRICTED BECAUSE OF WHAT I SAY, EVEN IF IT IS CONTROVERSIAL?

A:         No, the First Amendment protects speech even if most people would find it offensive, hurtful or hateful. Speech generally cannot be banned based upon its content or viewpoint because it is not up to the government to determine what can and cannot be said. A bedrock principle of the First Amendment is that the government may not prohibit expression of an idea because society finds it offensive or disagreeable. Also, protest speech also cannot be banned because of a fear that others may react violently to the speech.  Demonstrators cannot be punished or forbidden from speaking because they might offend a hostile mob. The Supreme Court has held that a “heckler’s veto” has no place in First Amendment law.

A:         As a general rule, no. The government cannot require that individuals or small groups obtain a permit in order to speak or protest in a public forum. However, if persons or organizations want to hold larger rallies and demonstrations, they may be required by local laws to obtain a permit.

Q:      AM I ALLOWED TO CARRY A WEAPON OR FIREARM AT DEMONSTRATION OR PROTEST?

That said, even if possession of weapons is allowed, their presence at demonstrations and rallies can be intimidating and provocative and does not help in achieving a civil and peaceful discourse on issues of public interest and concern.

A:         In recent history, challenges to the right to protest have come in many forms. In some cases, police have cracked down on demonstrations by declaring them “unlawful assemblies” or through mass arrests, illegal use of force or curfews. Elsewhere, expression is limited by corralling protesters into so-called “free-speech zones.” New surveillance technologies are increasingly turned on innocent people, collecting information on their activities by virtue of their association with or proximity to a given protest. Even without active obstruction of the right to protest, police-inspired intimidation and fear can chill expressive activity and result in self-censorship. All of these things violate the First Amendment and are things the police cannot do to censor free speech. Unless the assembly is violent or violence is clearly imminent, the police have limited authority under the law to shut down protesters.

Clearly, as evidenced by the recent tensions in Charlottesville, Va., we’re at a crossroads concerning the constitutional right to free speech.

Yet as Benjamin Franklin warned, “Whoever would overthrow the liberty of a nation must begin by subduing the freeness of speech.”

As I make clear in my book Battlefield America: The War on the American People, ensuring freedom for those in the unpopular minority constitutes the ultimate tolerance in a free society.

If ever there were a time for us to stand up for the right to speak freely, even if it’s freedom for speech we hate, the time is now.