USA: A Year Where Tyranny Took a Step Forward And Freedom Got Kicked 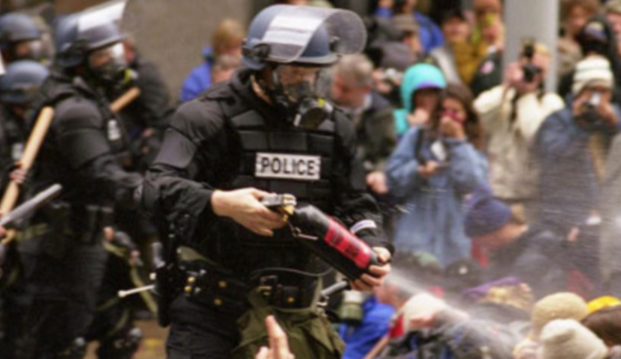 Now we find ourselves approaching that time of year when, as George Washington and Abraham Lincoln proclaimed, we’re supposed to give thanks as a nation and as individuals for our safety and our freedoms.

It’s not an easy undertaking.

How do you give thanks for freedoms that are constantly being eroded? How do you express gratitude for one’s safety when the perils posed by the American police state grow more treacherous by the day? How do you come together as a nation in thanksgiving when the powers-that-be continue to polarize and divide us into warring factions?

Thinking good thoughts, being grateful, counting your blessings and adopting a glass-half-full mindset are fine and good, but don’t stop there.

This world requires doers, men and women (and children) who will put those good thoughts into action.

It says a lot (and nothing good) about the state of our world and the meanness that seems to have taken center stage that we now have a day (World Kindness Day) devoted to making the world more collectively human in thoughts and actions. The idea for the day started after a college president in Japan was mugged in a public place and nobody helped him.

Unfortunately, you hear about these kinds of incidents too often.

This is how evil prevails: when good men and women do nothing.

By doing nothing, the onlookers become as guilty as the perpetrator.

It works the same whether you’re talking about kids watching bullies torment a fellow student on a playground, bystanders watching someone dying on a sidewalk, or citizens remaining silent in the face of government atrocities.

There’s a term for this phenomenon where people stand by, watch and do nothing—even when there is no risk to their safety—while some horrific act takes place (someone is mugged or raped or bullied or left to die): it’s called the bystander effect.

Historically, this bystander syndrome in which people remain silent and disengaged—mere onlookers—in the face of abject horrors and injustice has resulted in whole populations being conditioned to tolerate unspoken cruelty toward their fellow human beings.

So what can you do about this bystander effect?

Be an individual. Listen to your inner voice. Take responsibility.

Refuse to remain silent. Take a stand. Speak up. Speak out.

“I swore never to be silent whenever and wherever human beings endure suffering and humiliation,” stated Holocaust Elie Wiesel in his Nobel Peace Prize acceptance speech in 1986.

Unfortunately, as I make clear in my book Battlefield America: The War on the American People, too many Americans have opted to remain silent when it really matters while instead taking a stand over politics rather than human suffering.

That needs to change.

I don’t believe people are inherently monsters. We just need to be more conscientious and engaged and helpful.

The Good Samaritans of this world don’t always get recognized, but they’re out there, doing their part to push back against the darkness.

For instance, earlier this year in Florida, a group of 80 people formed a human chain in order to rescue a family of six—four adults and two young boys—who were swept out to sea by a powerful rip current in Panama City Beach. One by one, they linked hands and stretched as far as their chain would go. One by one, they rescued those in trouble and pulled each other in.

There’s a moral here for what needs to happen in this country if we only can band together and prevail against the riptides that threaten to overwhelm us.

Here’s what I suggest.

Instead of just giving thanks this holiday season with words that are too soon forgotten, why not put your gratitude into action with deeds that spread a little kindness, lighten someone’s burden, and brighten some dark corner?

I’m not just talking about volunteering at a soup kitchen or making a donation to a charity that does good work, although those are fine things, too.

What I’m suggesting is something that everyone can do no matter how tight our budgets or how crowded our schedules.

Focus on the things that unite instead of that which divides. Be a hero, whether or not anyone ever notices.

Even holding the door for someone or giving up your seat on a crowded train are acts of benevolence that, magnified by other such acts, can spark a movement.

Imagine a world in which we all lived in peace.

John Lennon tried to imagine such a world in which there was nothing to kill or die for, no greed or hunger. He was a beautiful dreamer whose life ended with an assassin’s bullet on December 8, 1980.

Still, that doesn’t mean the dream has to die, too.

There’s something to be said for working to make that dream a reality. As Lennon reminded his listeners, “War is over, if you want it.”

The choice is ours, if we want it.