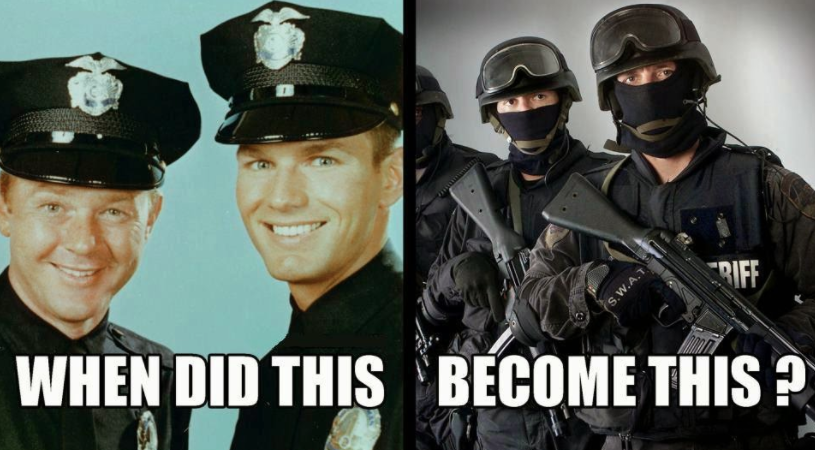 It is often said that if America ever ceases to be good, she will cease to be great.

Unfortunately, the American government has been the opposite of good for too long now.

In fact, the American government has been very, very, very bad: so bad, in fact, as to be almost indistinguishable at times from the evil it claims to be fighting, whether that evil takes the form of terrorism, torture, drug trafficking, sex trafficking, murder, violence, theft, pornography, scientific experimentations or some other diabolical means of inflicting pain, suffering and servitude on humanity.

Philosopher Susan Neiman suggests that referring to something as “evil is a way of marking the fact that it shatters our trust in the world.”

It’s an apt description for a government that keeps violating the sacred trust of its citizenry.

“We the people” should have learned early on that a government that repeatedly lies, cheats, steals, spies, kills, maims, enslaves, breaks the laws, overreaches its authority, and abuses its power at almost every turn can’t be trusted.

Consider just a few of the ways in which the government—in a misguided, ill-conceived, flawed, bureaucratic and downright Orwellian attempt to fight evil with evil—continues to inflict evil on the citizenry.

Trafficking weapons to catch drug traffickers. They referred to it as Operation Fast and Furious: a 15-month sting operation aimed at dismantling Mexican drug cartels and disrupting drug trafficking routes within the United States. Only it didn’t quite work out that way. As the National Review reports, “Under ‘Operation Fast & Furious,’ the U.S. government became a de facto arms dealer to Mexican drug cartels and Islamist criminals.” Not only did the U.S. government allowed gun sellers and informants to sell approximately 2,000 weapons to gun traffickers, but government agents then lost track of an estimated 1,400 weapons, many of which make it into the hands of the drug cartels and were used to murder and commit crimes.

Dealing drugs to catch drug dealers. Taking advantage of federal and state asset forfeiture laws that allow police to seize and keep money if they suspect it may be related to criminal activities, law enforcement agencies have been raking in millions of dollars in entrapment schemes in which they sell cocaine to drug users and then bust them for buying it, or lure big-city drug dealers to suburban towns with promises of big sales and then bust them in the act. As the Sun Sentinel reports: “Undercover officers tempt these distant buyers with special discounts, even offering cocaine on consignment and the keys to cars with hidden compartments for easy transport. In some deals, they’ve provided rides and directions to these strangers…”

Fighting wars abroad by fueling wars abroad. The United States, the world’s largest exporter of arms, has been selling violence to the world for too long now. Controlling more than 50 percent of the global weaponry market, the U.S. has sold or donated weapons to at least 96 countries in the past five years, including the Middle East. Some of these weapons inevitably end up in our enemies’ hands, as well as those of terrorists.

Creating terrorists in order to snare terrorists. The FBI has a long, sordid history of inventing crimes, breeding criminals and helping to hatch and then foil terrorist plots in order to advance its own sordid agenda: namely, amassing greater powers under the guise of fighting the war on terrorism. Investigative journalist Trevor Aaronson argues convincingly that “the FBI is much better at creating terrorists than it is at catching terrorists.” According to Aaronson’s calculations, the FBI is responsible for more terrorism plots in the United States than al Qaeda, al Shabaab and the Islamic State combined. One of the government’s tactics involves radicalizing impressionable young men in order to create and then “catch” terrorists.

Spreading disease in order to cure disease. For years, the American government conducted secret experiments on an unsuspecting populace—citizens and noncitizens alike—making healthy people sick by spraying them with chemicals, injecting them with infectious diseases and exposing them to airborne toxins. Then there was the U.S. military’s secret race-based testing of mustard gas on more than 60,000 enlisted men. And the CIA’s MKULTRA program in which hundreds of unsuspecting American civilians and military personnel were dosed with LSD, some having the hallucinogenic drug slipped into their drinks at the beach, in city bars, at restaurants.

Are you starting to notice a pattern here?

For too long now, the American people have been persuaded to barter their freedoms for phantom promises of security and, in the process, have rationalized turning a blind eye to all manner of government wrongdoing—asset forfeiture schemes, corruption, surveillance, endless wars, SWAT team raids, militarized police, profit-driven private prisons, and so on—because they were the so-called lesser of two evils.

Yet no matter how you rationalize it, the lesser of two evils is still evil.

How can you ever trust the government again?

As I make clear in my book Battlefield America: The War on the American People, you shouldn’t have trusted the government in the first place. It was Thomas Jefferson who warned, “In questions of power then, let no more be heard of confidence in man, but bind him down from mischief by the chains of the Constitution.”

Unfortunately, as Carl Sagan recognized, “If we’ve been bamboozled long enough, we tend to reject any evidence of the bamboozle. We’re no longer interested in finding out the truth. The bamboozle has captured us. It’s simply too painful to acknowledge, even to ourselves, that we’ve been taken. Once you give a charlatan power over you, you almost never get it back.”

How do you fight evil? Start by recognizing it. Talk about it. Refuse to play politics with your principles. Don’t settle for the lesser of two evils. Stop being apathetic.

As British statesman Edmund Burke warned, “The only thing necessary for the triumph of evil is for good men [and women] to do nothing.”