Craig Murray: The EU sails serenely past the wreck of the United Kingdom 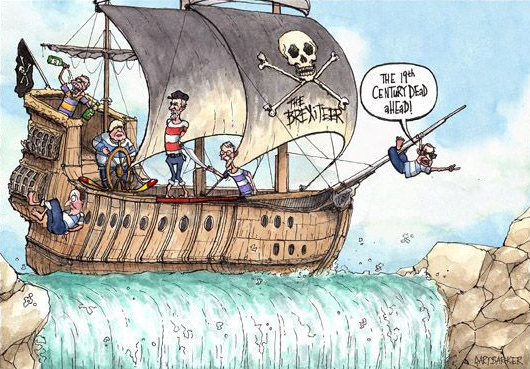 The disgraced former Defence Secretary Liam Fox has accused the EU of “blackmail” in the Brexit talks. This puzzles me. The disgraced former Defence Secretary has repeatedly asserted that the EU is desperate for a trade deal with the UK, and that German manufacturers of Mercedes and BMWs will insist that the UK leaving the EU brings no interruption in free trade, with no concomitant requirements for the UK to comply with EU practice.

But if the UK’s hand is so strong, and the EU’s hand is so weak, then the EU surely is in no position to “blackmail” the UK?

The disgraced former Defence Secretary has never struck me as a man of great intellect. It is perhaps unsurprising that it has not occurred to him, that to accuse your negotiating partner, in the most public manner possible, of blackmail, is not a tactic designed to inculcate the cooperative spirit necessary in any complex negotiation. Worse than that, “Blackmail” is a cry of “please don’t hurt me, I am weak on this one”. Fox contrives to be both insulting and inept all at the same time. It really is quite astonishing that a man who is both entirely incompetent, and has the corruption and inanity of the Werritty affair permanently inscribed on his record, is in office.

But the most incredible thing of all is that, standing in Japan next to Theresa May, the disgraced former Defence Secretary looks competent and assured by comparison. The collapse of the UK is not a pretty sight.

Meanwhile, Brexit has one positive side – for the EU. Just as national parliaments have done through history, the EU Parliament has been increasing its power incrementally over decades, thus eating away at the EU’s democratic deficit. Officially, on Brexit the Commission negotiates, and the Council (of national governments) decides, while the Parliament is only consulted. But plainly the role played by Guy Verhofstadt, the Parliament’s Brexit rapporteur, is more substantive than that and in the real world the EU Parliament will need to be carried along in agreement. That is a good thing for EU democracy.

Secondly, allow me to crow yet again at the detractors of the Euro. The Euro is arguably the most astonishing economic project in the history of the world, a currency union replacing dozens of existing currencies in the world’s largest and most mature economic bloc. Its success is, on any rational analysis, far more notable than the inevitable teething troubles, pretty well all of which can be ascribed to countries joining at too high a rate allowed to their former currency. I have always advocated that the UK join the Euro and that independent Scotland simply adopts it. Commenters invariably rejoin by echoing the ludicrous prognostications by the Mail and the Express of the Euro’s collapse. I look forward before Easter to the Euro decisively overtaking the pound in value.

The EU will go from strength to strength. An independent Scotland will remain within it. The rump UK will subside with alarming speed, comforting itself with its imperial delusions and xenophobic pride at “controlling its borders” and keeping out those pesky foreigners, who kept blackmailing it.