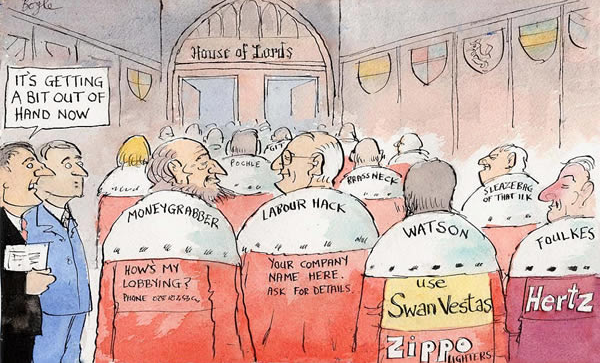 By Darren Hughes – Electoral Reform Society: The past two years have not been good for the House of Lords. Despite legislation to expel those who commit crimes or fail to attend, there are still those who do very little yet continue to collect large pay cheques.

At the end of 2015, the ERS conducted an audit of the House of Lords, Fact vs Fiction. It challenged claims that the Lords is a beacon of independence and professional diversity and demonstrated the huge democratic and financial cost.

The research also found that the Lords represents only a small section of society: 44 percent of Lords listed their main address in London and the South East, while 54 percent were 70 or older. More members have worked in the Royal Household than in manual jobs.

But the problems of an unrepresentative, inefficient and growing house have not improved since those revelations. The ERS’ new report, The High Cost of Small Change: The House of Lords Audit, shows that 109 peers failed to speak at all in the 2016/17 session. Sixty-three of those claimed expenses – claiming a total of £1,095,701.

More shockingly, 33 peers have claimed nearly half a million pounds between them while failing to speak, table a written question or serve on a committee in the past year. Particularly at a time when Parliament is dealing with major legislative upheaval, this kind of behaviour is unacceptable.

Indeed, nearly 1 in 10 of the peers eligible to vote throughout 2016/17 (9.2% – 72 of the 779) are inactive when it comes to scrutinising the government’s work on committees, in the chamber, or through written questions – vital roles for the revising chamber.

This is something that is finally being recognised by the upper house. The Lord Speaker’s Committee on the size of the House was set up to discuss how to shrink the supersized second chamber. In October 2017, they released their plans to reduce the size of the Lords to 600 in 11 years and move to 15 year terms by 2042. But by that time NASA plans to have landed humans on Mars.

Calls for reform are often dismissed on the basis that the Lords is a bastion of independence. We can reveal the truth is far from it. Our analysis shows that nearly 80 percent of Conservative peers didn’t once vote against the government last year.

Of the Labour peers who voted, 50 percent voted against the government more than 90 percent of the time. And non-partisan crossbenchers often don’t turn up – over 40 percent voted fewer than 10 times last year: leaving decisions in the hands of the party whips.

Finally, the House hosts 184 ex-MPs, 26 ex-MEPs, 11 ex-MSPs, 8 ex-Welsh AMs, 6 ex-London AMs, 11 ex-MLAs and 39 current or ex-council leaders, as of April 2017. Rather than an independent chamber, the Lords is increasingly being used as a retirement home or a gift to those no longer wanted by parties.

The ERS are calling for a much smaller, fairly-elected House of Lords the public can have faith in. Around two thirds of voters agree in both the need for a drastic cut in its size, and for it to be largely elected.

This report lays out the state of Britain’s second chamber today. It’s now up to politicians to meet the challenge – before trust in our democracy falls even further.