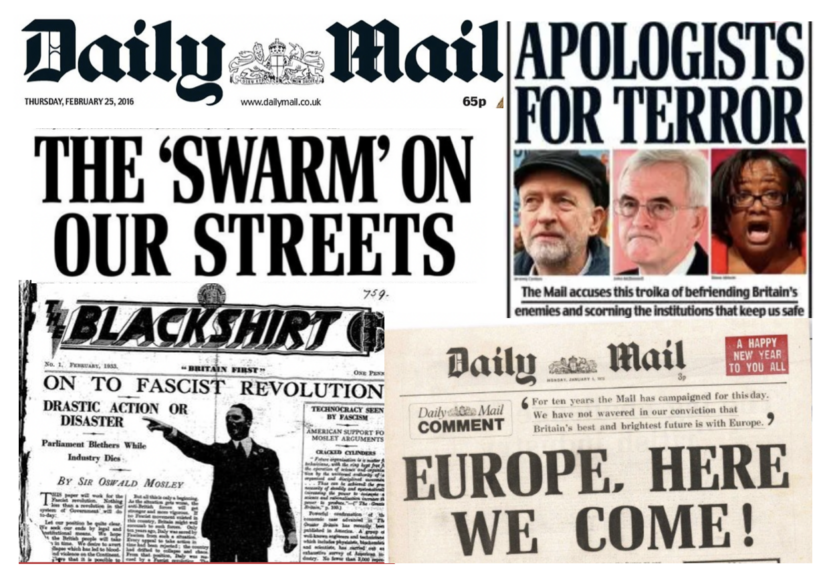 By TruePublica: In the early 1930s, when Adolf Hitler made considerable gains in the German elections and Mein Kampf had already been written, making absolutely clear Hitler’s thoughts on the racial supremacy of the supposed ‘Aryan’ race – fascism in the UK was on the rise. Its ideology was spurred on by newspapers and leaflets – published by one called – ‘The Blackshirt,’ another called ‘The East London Pioneer’ and even one unambiguously called ‘Fascist Week.’ All were actually the work of the British Union of Fascists (BUF).

At the time, the Daily Mail, saw Hitler, his party and their success representing the future with the “birth of Germany as a nation”. The Daily Mail was a fanatical supporter of fascism and even went with its infamous headline, in 1934 – “Hurrah for the Blackshirts” with an article promoting the ideology of fascism and the BUF. Lord Rothermere, the owner of the Daily Mail and author of that article fully supported the fascist Nazi saluting Blackshirts of Britain somehow seeing them as the party to “take over responsibility for British national affairs”. Subsequently, Lord Rothermere dined with Hitler who was more than once an honoured guest.

As the war rhetoric started to become something of a reality, the Daily Mail changed its stance by moving its editorial line from explicitly supporting Hitler and Mussolini, Nazi’s and fascists. There was a reason. 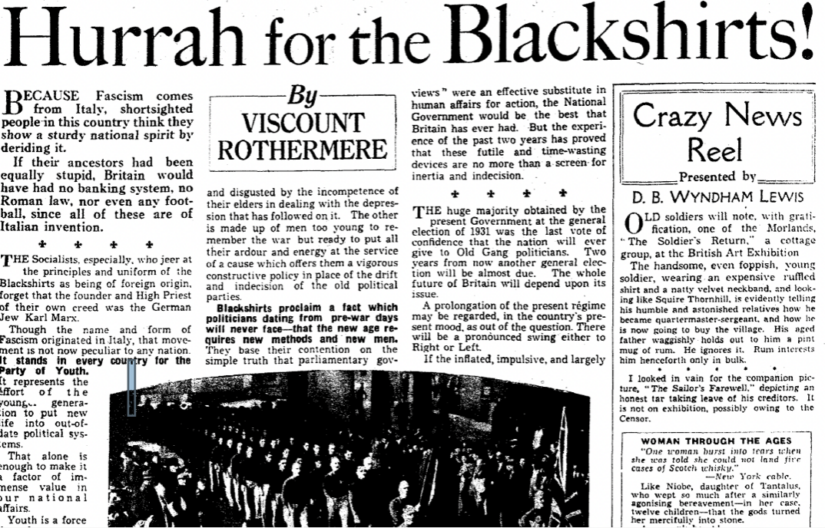 By 1939, Defence Regulation 18B was a sub-section of the Emergency Powers (Defence) Act 1939 passed by the Houses of Parliament prior to the outbreak of the Second World War. 18B allowed the Government to intern individuals suspected of being Nazi sympathisers, suspending their right to habeas corpus. The head of the BUF, Sir Oswald Mosley and his wife Lady Diana, as well as a number of their acolytes, were interned in London and later on the Isle of Man under 18B.

The horrors of World War 2 saw something like 75 million killed and 20 million displaced from their homelands. Somehow, that didn’t deter the fact that racism and xenophobia was in its DNA, which, as so many commentators have noted – remains to this day.

The Daily Mail was proven to be so far on the wrong side of history it is amazing that anyone bought the paper again.

The same can be said of its stance when it comes to a number of issues that have (or will) seriously affect the future wellbeing and prosperity of the United Kingdom. For instance, it ardently promoted numerous stories that climate change was some sort of plot by world leaders and scientists and was calling it – ‘the great green con‘ just a few years ago. The paper claimed that they had – “The hard proof that finally shows global warming forecasts that are costing you billions were WRONG all along.” They presented “irrefutable evidence that official predictions of global climate warming have been catastrophically flawed.”

Its constant rubbishing of climate data was based on its own serious factual errors that turned into little more than a propaganda campaign of spurious conspiracy theories. The Daily Mail worked fanatically, once again, on the wrong side of what has been known for decades as an existential threat to human life. Again on the wrong side of history.

With gay rights, the Daily Mail ran the headline in July 1993 – “Abortion Hope After ‘Gay Genes’ Finding“. Of the tabloid headlines which commented on the Xq28 gene, the Mail was criticised as “perhaps the most infamous and disturbing headline of all.” The Mail also received the highest number of complaints about an article when it criticised the life and death of co-lead singer of Boyzone Stephen Gately. Described as “insensitive, inaccurate and homophobic” – major advertisers such as M&S pulled their ads.

With Europe, it was either wrong or wrong. It claimed that it had campaigned for ten years to join the common market.  “We have not wavered from our conviction that Britain’s best and brightest future is with Europe” it said in 1973, the day Britain gained entry to the EEC.

Then it campaigned for just as long to leave it. At its very heart, racism and xenophobia became the platform to convince its ageing readership that somehow migrants from Europe was stifling our chances, that they were leeching from us, causing strain on the NHS, education and national security. Research, studies and parliamentary reports contained unanimous evidence that this was not true – but like its conspiratorial stance on climate change – the Daily Mail doubled down on the runup to Brexit and now Britain has quickly fallen to the bottom of the economic growth table in the G7 and sees itself adrift on the global stage.

The Daily Mail proclaimed – “Cheers to a great British future” celebrating its victory with its front-page image of Nigel Farage downing a pint. Fast forward to today, where business leaders, including those who campaigned for Brexit, now see that ‘Getting Brexit Done’ was in fact, going to do so much damage. Many companies have packed up and gone, well over £1trillion in assets have been transferred from the UK to the EU and British exports are now down 10 per cent against the European average as we emerge from the pandemic. Global trade deals have added up to less than one-quarter of what Britain already had within the EU and our national prospects in the near future look markedly worse. 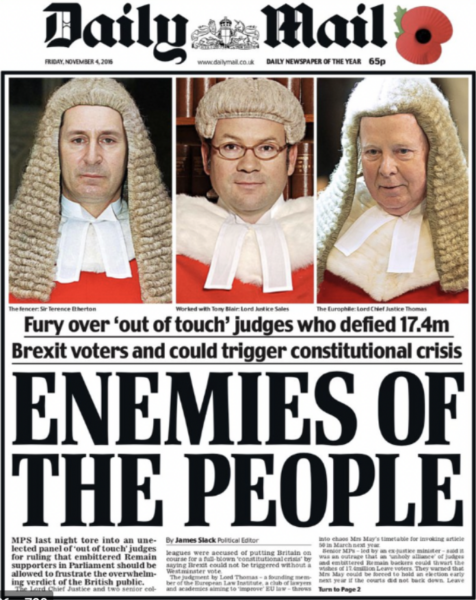 Economists and political commentators in the centre-ground know that this government never had a Brexit plan in the first place and are now actively attacking it for its lack of anything of substance in the light that there’s nothing that looks anything remotely like a thought out policy. For instance, the FT last weekend accused the Johnson government of being anti-business, unpredictable, and flimsy with economic policy and wholly expects the Brexit revolutionaries in government to start devouring themselves as failure overtakes absurd three-worded slogans that now more often than not end up in personal attacks on anyone questioning them or U-turns.

And through the whole Brexit episode that contributes to our declining national experience, the Daily Mail has continued its campaign of being on the wrong side of history. Whilst the pandemic is, of course, the root cause of many problems recently, the promised sunlit uplands have been drowned out by the effects of Brexit. British farmers and fishermen pleading for help merely to survive, empty shelves, shortages and crisis upon crisis are all exacerbated by wrenching ourselves away from the biggest trading region in the world – without a plan.

But it didn’t end with accusing judges of being traitors, of its disguised racism (See ‘plastic Brits‘ article in 2012 Olympics) and pushing its aggressive right-wing anti-liberal agenda. It has actively stood against the British state by taking a pro-Russian stance and promoted heavy Chinese investment into Britain – the former now declared as a No 1 hostile state and the latter now described as the “foremost state-based threat to Britain“. In August 2016, the Daily Mail even began a partnership with The People’s Daily, the official newspaper of the Chinese Communist Party.

The truth is, the Daily Mail has a history of standing up for Britain’s enemies. It wasn’t just them actively attempting to be the recruitment department for Mussolini’s fascists or Hitler’s Nazi’s by encouraging our own to march down our high streets as the way forward – it’s been against the interests of Britain for decades when it comes to their support of what are subsequently declared hostile states that intend to damage Britain’s democracy, human rights and our unique way of life. Let’s not forget that the union is now threatened, that Britain is the only country in the world with an internal border within its own territory and our future does not seem to include anything remotely like they promised.

It was the Daily Mail who banged the drumbeat of our island race being ‘invaded’. When Theresa May attempted a deal without an internal border, the loudest voice in the media was the Daily Mail. Words like – “How disappointing that Theresa May, who spoke so powerfully against mass immigration last year, appears to have been bought off” were commonplace. The trouble is – now we face the consequences of throwing them out in the first place. U-turns on HGV drivers, fruit pickers, butchers and abattoir workers is confirmation of those consequences. And we know it will only get worse. In fact, things could get much worse.

There’s the feeling amongst many economists that the sudden economic rebound experienced in Britain won’t last. All that money pumped into people’s bank accounts during lockdowns, tax savings on house-buying and so on will run out quickly with the threat of a recession now becoming a reality for next year.

And Britain is quickly heading towards another winter with the prospect of mismanaging Covid-19. Already, the UK has the highest infection rate per million in the world and it’s likely going to get much worse. The Daily Mail has heavily pushed the idea that masks do nothing to help public health in this pandemic – an idea massively outweighed by countless reports supported by irrefutable evidence (HERE – HERE – HERE and HERE).

In 2017,  44 per cent of adults in the UK think the Daily Mail is ‘very right-wing.’ One can only think that that number must have increased by now. Unsurprisingly, the Daily Mail and Mail Online combined are the source of the most amounts of complaints annually to IPSO – the independent press standards orgainsation. Wikipedia refuses to quote the Daily Mail in anything on its website – hardly surprising given the inaccuracy of so much of what it reports.

And yet – Boris Johnson has a controversial plan to install the the staunchly right-wing former Daily Mail editor Paul Dacre as chair of the media watchdog Ofcom. Thankfully, this has failed – for now. Our cultural institutions are in a war – a culture war – and this is where the Daily Mail goes full circle – towards its fascist DNA. It doesn’t like democracy, it doesn’t like liberal attitudes, it doesn’t like progressive anything – it wants to drag the country back to something akin to the 1930s.

Right now – the Daily Mail and Mail Online are stoking fears of imminent food shortages – pushing what is likely to be a self fulfilling prophesy – just as the media did with the recent petrol pump crisis. It’s what it does best isn’t it – destabilising the United Kingdom.