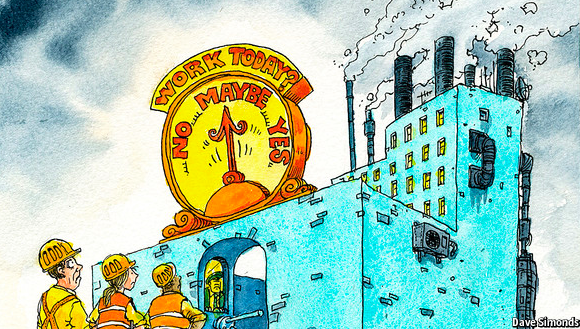 I am home one hour early. There were not enough customer orders so we were sent home. We won’t be paid for this one hour. I, despite having been at this company for only a few weeks, have been training ‘newbie’ to the job. Until two years ago, trainers were given £2ph for doing this but now you get a ‘thank you’ which doesn’t buy much in Tesco. The dropout rate amongst ‘newbies’ is alarming (Six out of fifteen did not turn up on day 2 and the rest have been promised £100 bonus if they stay longer than six weeks). We weren’t so that is a further cause for discontent amongst my fellow workers on top of non-payment for training and loss of one hour of wages. Not a good week.

I am curious, was curious, to see how the Brits and their fellow workers from Eastern Europe get on. I was initially impressed. On the factory floor people are okay with each other, smiles and greetings exchanged, and I think everyone gets on.

They do. On the factory floor.

But at break time, the Brits sit with the Brits and the East Europeans sit in their groups. It’s apartheid but not as we know it.

No Brit speaks openly about what is going on around them but after a couple of weeks of knowing me they begin to open up and their reaction ranging from studied reservation to outright hostility towards the ‘foreign’ workers becomes clear. This is not universal but hugely predominant. While they all understand the East Europeans moved to their town in pursuit of better life, they blame them for the double economic whammy of depression in wages and rising house prices which are taking them out of the range of the younger generation of British people.

Over 80% of townspeople voted for Brexit because of this.

They are not racists and include White, Asian and Black Brits. They point to examples, verified by East European workers who I talk to, that they work to minimise their taxation; a number will work eight or nine months before reaching their personal allowance limit, return to their country of origin, live well before beginning the process by returning to UK in March / April.

I make friends with a young pole who joined two weeks after I did. We seem to hit it off because I offered him a seat at my table at break and we meet and talk most days. His experiences are a microcosm of the East European experience.

He came to the UK from Krakow two years ago, newly married with hopes of a better life for him and his wife. In Krakow he was earning £350 a month for similar work while rent for an apartment for him and his wife costs £500 per month. In the UK, he worked eleven months at one job (as an agency worker) to earn a contract as an employee so he and his wife could settle down. He was let go because of his constant pleading for this. (One man at the company where we are both working now has been a ‘gig’ worker for ten years in the same job which seems unbelievable but is true). His young wife got tired of their new life which had promised so much and delivered so little that she left him. Since then he has been ‘gigging’ at various jobs but the scars are clear.

As we discuss what has happened, he says something quite unexpected to me. “Your country is going to shit.” I ask him why he thinks that. “Becoming like my country. No one give shit. No one make enough money to live. Fu**in’ shit. No future. I see it.”

I watch him walk away for a cigarette to the bus-shelter-like construct where all smokers congregate and the failure of our political leaders and especially the EU becomes apparent.

EU (as the EEC) came into existence to ensure prosperity in the whole of Western Europe would take away one of the major causes of the wars that had wracked the continent (and the world). Successful examples of member economies which benefitted from this ideal included Ireland which saw a massive decrease in emigration as a result. By becoming an undemocratic, neo-liberal, geo-political organisation with its mantra of Free Trade=Free Movement of People which only works for corporate interests it is in the process of impoverishing the people of all its member states and destroying the very basis of its existence. That is why there is rise of Right Wing Populism, loss of faith in our institutions and questioning of the very basis of capitalism. And Brexit.

All the people, us Brits and the East Europeans, are ultimately victims of this system because the only thing it promises is more depression of wages, more poverty, less opportunity and a hugely uncertain future for our people.

It has also allowed corporates to coast using smoke and mirrors to create the illusion of success; bolstering their bottom line by taking money from its workers rather than innovating and capital expenditure.

This company valued at billions we are working for provides a prime example of this at work. Failure for those in power is the new success.

Next: The Winners from the Gig Economy