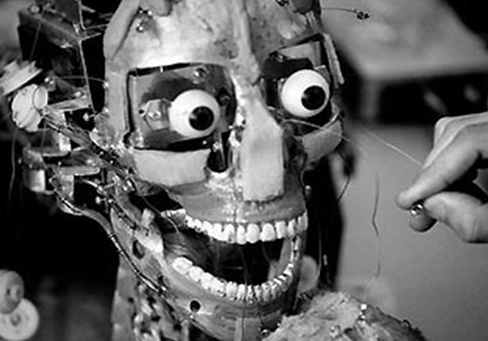 TruePublica Editor: You are sure to have read the story slapped across newspapers and news aggregators such as Google News that robots have been set some tasks and have scarily invented their own language. The intimation here is that robots with artificial intelligence somehow wanted to communicate without interference from human beings – as if to start plotting the downfall of the human race.

Image – care of the imaginative and very scary photoshop department at The Independent. It depicts a swivel-eyed, hairless dodgy looking chap with skin problems and lop-sided ears as having superior language skills that we should be afraid of.

These stories were accompanied by scary images such as the one here from the Independent.

The Sun: Facebook shuts off AI experiment after two robots begin speaking in their OWN language only they can understand. The Sun said – “A robot expert said the revelation that Facebook machines had spoken in their own language was exciting — but also incredibly scary.”

The Telegraph: Facebook shuts down robots after they invent their own language. The Telegraph said – “The researchers said it wasn’t possible for humans to crack the AI language and translate it back into English. “It’s important to remember, there aren’t bilingual speakers of AI and human languages.”

Fictional robot image invented by The Sun that chatted to another image of a robot, that we should be very, very frightened of. Robots are discussing plans to take humans to the court of some rights somewhere as this type of stereotyping should be banned and is upsetting to intelligent life forms – artificial or not.

Daily Mail: Facebook shuts down controversial chatbot experiment after AIs develop their own language to talk to each other. The Daily Mail said – “However, researchers at the Facebook AI Research Lab (FAIR) found that they had deviated from script and were inventing new phrases without any human input. The bots were originally left alone to develop their conversational skills. When the experimenters returned, they found that the AI software had begun to deviate from normal speech. Instead, they were using a brand new language created without any input from their human supervisors.

The Independent ran the same story saying much of the same thing. However, they added additional evidence that this scary phenononom of robots inventing a private new language via artificial intelligence was really quite normal.

“Earlier this year, Google revealed that the AI it uses for its Translate tool had created its own language, which it would translate things into and then out of. But the company was happy with that development and allowed it to continue.

Another study at OpenAI found that artificial intelligence could be encouraged to create a language, making itself more efficient and better at communicating as it did so.”

The truth is that Facebook, was not using robots of humanoid appearance in the first place, it was an experiment using a programme and was abandoned because A) when they began “speaking in their OWN language which only they could understand” no-one else could, not even the robots themselves – it was talking gibberish and B) the programs were not doing the work required, not because they were afraid of the results.”

In others words, the story is typical of mainstream media nonsense knocked out to engage the innocent, unwary and gullible because click-baiting is about the only thing driving revenues today, not serious journalism.