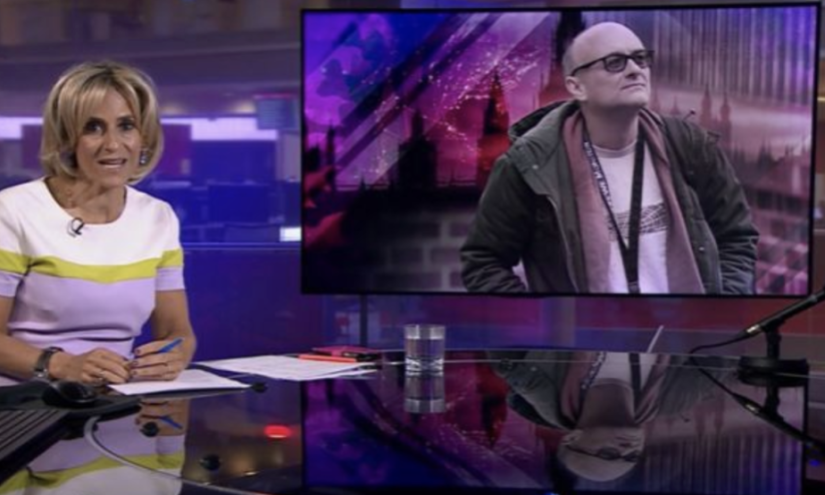 TruePublica Editor: Most of the mainstream media are reporting that Emily Maitlis was replaced as host of Wednesday night’s episode of Newsnight by another member of the programme’s team after BBC bosses reprimanded her over a monologue in which she attacked the government’s handling of Dominic Cummings’ lockdown trip to Durham.

News bosses at the corporation said the BBC2 programme’s lead presenter breached impartiality rules with her opening remarks on Tuesday night. She had been due to host the show on Wednesday night, but the Newsnight reporter Katie Razzall presented it instead.

What was it that Maitlis said that was so bad?

In the monologue, Maitlis told viewers: “Dominic Cummings broke the rules – the country can see that and it’s shocked the government cannot. The longer ministers and the prime minister insist he worked within them, the more likely the angry response to the scandal is likely to be … He made those who struggled to keep to the rules feel like fools, and has allowed many more to assume they can flout them.”

Maitlis was right – the public’s response has got angrier – something even that both Cummings and Johnson couldn’t see. Not only that, but 60 Tory MP’s have also piled in and decided not to ‘move on’ as the PM demanded yesterday. This is not a good look in the middle of a public health and economic crisis.

But there’s something else here. Maitlis is a decent type – with a really strong journalistic background. Controversies in her long and successful career have been limited to having a go at that rampantly racist Rod Liddle. And she was given a slapping for that by the BBC.

I have to say, it’s not like Maitlis in the slightest to take a night off because of an incident like this. If anything, her internal defiance would demand she appeared as usual as if to say she has said what said and that’s that. I asked some contacts of mine and had confirmation (although only one) that she was forced off the show and replaced.

Then various individuals seemed to be hearing (a rumour) that No10 Downing Street had leant on the BBC once again and demanded a visible show of Maitlis being reprimanded. I stress this is speculation as I can’t get more than one trusted contact to confirm.

I’ll leave you with this, which is pretty much what I have heard. I can’t vouch for @mi6rogue of course. 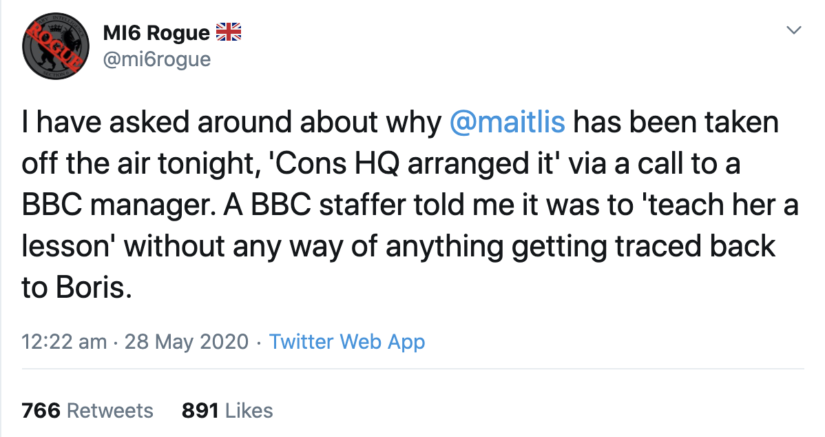 I’m not sure what everyone else thinks about this incident but for me, it says a lot about the political culture in the UK right now – that the only person who has faced any consequences for the irresponsible and dangerous actions of Dominic Cummings is a journalist who pointed them out in the first place!

If it is true that Tory HQ has demanded that the BBC ‘teach her a lesson’ – then we truly have entered a Trumpian dystopia. Everything is getting worse in Britain because of this poisonous, divisive government.