Whitehead: USA Police State: Nervous About Traffic Stops? I Am. You Should Be, Too 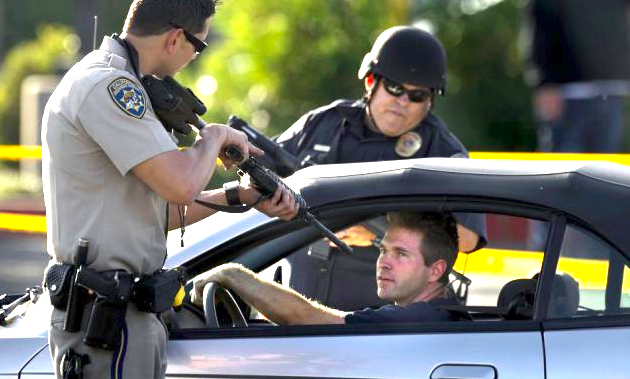 By John B Whitehead: We’ve all been there before. You’re driving along and you see a pair of flashing blue lights in your rearview mirror. Whether or not you’ve done anything wrong, you get a sinking feeling in your stomach.

You’ve read enough news stories, seen enough headlines, and lived in the American police state long enough to be anxious about any encounter with a cop that takes place on the side of the road.

For better or worse, from the moment you’re pulled over, you’re at the mercy of law enforcement officers who have almost absolute discretion to decide who is a threat, what constitutes resistance, and how harshly they can deal with the citizens they were appointed to “serve and protect.”

This is what I call “blank check policing,” in which the police get to call all of the shots.

So if you’re nervous about traffic stops, you have every reason to be.

Trying to predict the outcome of any encounter with the police is a bit like playing Russian roulette: most of the time you will emerge relatively unscathed, although decidedly poorer and less secure about your rights, but there’s always the chance that an encounter will turn deadly.

For instance, it was just a year ago, in the early morning hours of Dec. 1, 2016, when Gregory Tucker, a young African-American man, was pulled over by Louisiana police for a broken taillight.

What should have been a routine traffic stop became yet another example of police brutality in America.

According to the lawsuit that was filed in federal court by The Rutherford Institute, Tucker was thrown to the ground by police, beaten, arrested and hospitalized for severe injuries to his face and arm, allegedly in retaliation for “resisting arrest” by driving to a safe, well-lit area before submitting to a traffic stop for a broken tail light.

Mind you, this young man complied with police. He just didn’t do it fast enough to suit their purposes.

If this young man is “guilty” of anything, he’s guilty of ticking off the cops by being cautious, concerned for his safety, and all too aware of the dangers faced by young black men during encounters with the police.

Frankly, you don’t even have to be young or black or a man to fear for your life during an encounter with the police.

Just consider the growing numbers of unarmed people are who being shot and killed just for standing a certain way, or moving a certain way, or holding something—anything—that police could misinterpret to be a gun, or igniting some trigger-centric fear in a police officer’s mind that has nothing to do with an actual threat to their safety.

At a time when police can do no wrong—at least in the eyes of the courts, police unions and politicians dependent on their votes—and a “fear” for officer safety is used to justify all manner of police misconduct, “we the people” are at a severe disadvantage.

Add a traffic stop to the mix, and that disadvantage increases dramatically.

According to the Justice Department, the most common reason for a citizen to come into contact with the police is being a driver in a traffic stop.

On average, one in 10 Americans gets pulled over by police.

Indeed, police officers have been given free range to pull anyone over for a variety of reasons.

This free-handed approach to traffic stops has resulted in drivers being stopped for windows that are too heavily tinted, for driving too fast, driving too slow, failing to maintain speed, following too closely, improper lane changes, distracted driving, screeching a car’s tires, and leaving a parked car door open for too long.

Motorists can also be stopped by police for driving near a bar or on a road that has large amounts of drunk driving, driving a certain make of car (Mercedes, Grand Prix and Hummers are among the most ticketed vehicles), having anything dangling from the rearview mirror (air fresheners, handicap parking permits, troll transponders or rosaries), displaying pro-police bumper stickers, having acne, appearing nervous or driving with a stiff posture.

In other words, drivers beware.

Traffic stops aren’t just dangerous. They can be downright deadly.

From the moment those lights start flashing and that siren goes off, we’re all in the same boat.

Survival is the key.

However, there is a price for asserting one’s rights. That price grows more costly with every passing day.

If you ask cops and their enablers what Americans should do to stay alive during encounters with police, they will tell you to comply, cooperate, obey, not resist, not argue, not make threatening gestures or statements, avoid sudden movements, and submit to a search of their person and belongings.

The problem, of course, is what to do when compliance is not enough.

As I make clear in my book Battlefield America: The War on the American People, every day we hear about situations in which unarmed Americans complied and still died during an encounter with police simply because they appeared to be standing in a “shooting stance” or held a cell phone or a garden hose or carried around a baseball bat or answered the front door or held a spoon in a threatening manner or ran in an aggressive manner holding a tree branch or wandered around naked or hunched over in a defensive posture or made the mistake of wearing the same clothes as a carjacking suspect (dark pants and a basketball jersey) or dared to leave an area at the same time that a police officer showed up or had a car break down by the side of the road or were deaf or homeless or old.

Frankly, the only truly compliant, submissive and obedient citizen in a police state is a dead one.

If you’re starting to feel somewhat overwhelmed, intimidated and fearful for your life and the lives of your loved ones, you should be.

You should be very afraid.