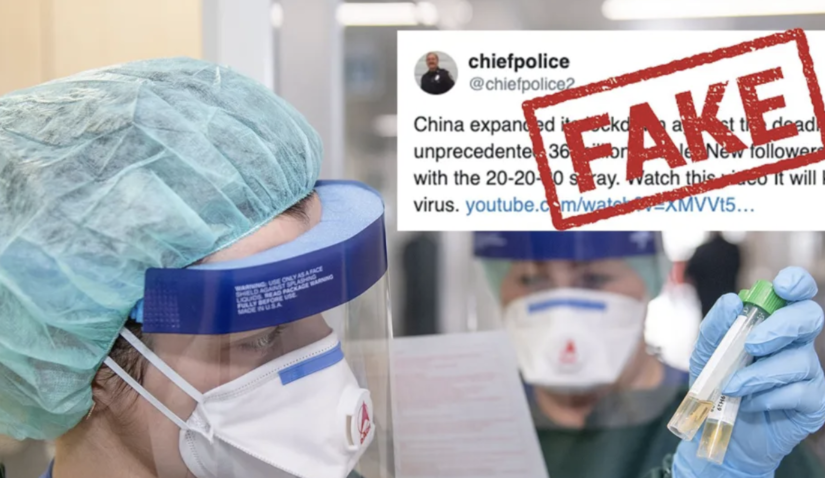 By TruePublica: It should come as no surprise to any straight-thinking person that it is Facebook that is the platform of choice for the conspiracy theorists and when it comes to Coronavirus – it is no different. It has come under fierce international criticism for doing little to combat fake news and spreading nonsense stories over the virus. Not only are people’s lives at stake, but civil society is also affected as are local communities and economies both large and small.

Facebook Inc. says it’s stepping up its fight to limit the spread of disinformation about the deadly Coronavirus and will start taking down content with false claims or conspiracy theories. But like much of the nonsense spread around on Facebook, it is highly doubtful they will make much effort or be effective.

“We are doing this as an extension of our existing policies to remove content that could cause physical harm,” said Kang-Xing Jin, Facebook’s head of health, in a blog post Thursday. Given that existing policies over the spread of fake news are wholly ineffective, it is obvious that the conspiracy theories will continue. Social media is the epicentre of all conspiracy theories today – and it spreads just like any other virus. Anyone who comes into contact with social media is likely to be exposed to it – some are infected – and some never really recover!

There are Facebook posts about false cures, such as drinking bleach to cure the virus or confusing posts about available health resources. Hashtags that are being used to spread disinformation on Instagram (also owned by Facebook) are just as prevalent.

FullFact had to clarify that Jacob Rothschild does not actually own a patent to Coronavirus and similarly had to make clear that it’s not all 5G’s fault. It even had to debunk a story that the lab from which the Coronavirus originated has the same symbol as the lab responsible for a mass outbreak in the Resident Evil games. One conspiracy website posted an article that suggested an emergency preparedness exercise by the “GATES FOUNDATION & OTHERS PREDICTED UP TO 65 MILLION DEATHS” from the coronavirus spreading (we won’t post links to these sites as ironically that helps Google rank them higher). The one common denominator in all this is social media. It’s not that people are stupid to believe this stuff it is that people have no idea who or what to believe any more – and of course, much of this stuff is aimed at a younger, more impressionable generation who don’t (yet) know better.

Hoaxes and conspiracy theories have been on the rise since news about deaths and infections linked to the illness began surfacing. IN addition, the spread of anti-Chinese racism has reportedly been on the rise in several countries, such as photos being shared purportedly showing signs that say “No Chinese allowed.”

There are more serious conspiracy theories that are, in fact, quite credible and do make even the most critical think twice about what is being published.

“Virologist Dr. Alan Cantwell wrote at the time that “the mysterious SARS virus is a new virus never before seen by virologists. This is an entirely new illness with devastating effects on the immune system, and there is no known treatment.” Dr. Cantwell also noted that the genetic engineering of coronaviruses has been occurring in both medical and military labs for decades. He wrote that when he searched in PubMed for the phrase “coronavirus genetic engineering”, he was referred to 107 scientific experiments dating back to 1987.”

That paragraph is published everywhere from independent news websites and places like Reddit to virtually every social media platform on the planet. It suggests that Coronaviruses like SARs was cooked up in a lab and released.

The problem is – the United States (again). The United States is the biggest user of biochemical weapons in the world – ever. It has also been alleged that the US has used such programs in many places around the world, most particularly against countries it is in conflict with and to be fair, America has even been proven to have used them on its own people. When the U.S. biological warfare program ended in 1969 it had developed six mass-produced, battle-ready biological weapons in the form of agents including anthrax, tularemia, brucellosis, Q-fever, VEE, and botulism. In addition staphylococcal enterotoxin B was produced as an incapacitating agent. This Wikipedia page is very carefully and extensively edited, but none-the-less it cannot be disputed that America has a lot to answer when it comes to the manufacture of bioweapons and it is of no surprise that they get the brunt of conspiracy finger-pointing.

However, claims that Coronaviris has been developed and used by the USA in its bid to halt Chinese economic superiority (alongside Trump’s trade wars) by using a race-specific bioweapon is another conspiracy theory. For instance, supporters of the conspiracy theory suggesting that SARS caused the most serious harm in mainland China, Hong Kong, Taiwan and Singapore, regions where most Chinese reside, while the United States, Europe and Japan were not affected as much was not true. There were 774 deaths reported in 17 countries as a direct result of SARS. The highest mortality from SARS outside of China occurred in Canada where 43 died. And, it shouldn’t be forgotten that the original conspiracy theory over SARS being an American bioweapon originated from two Russian scientists in 2003.

In addition, if just 774 deaths occurred as a direct result of SARs, do bear in mind what plain old flue does, just in America alone. The CDC estimates that influenza has resulted somewhere between 9 million – 45 million illnesses, between 140,000 – 810,000 hospitalisations and between 12,000 – 61,000 deaths annually since 2010. And that’s a set of statistics direct from the American Center for Disease Control and Prevention. For further context, the most recent year for which complete data is available (2017), 39,773 people died from gun-related injuries including gun murders and gun suicides in the US. Traffic fatalities account for another 44,000 American citizens each year. As you can see, flu kills a lot of people in the US, so do guns and cars – but by comparison, global SARs deaths hardly registers.

One other thing to remember is this. If it was ever proven that America had deliberately unleashed a lab created disease that ended in a global pandemic that killed thousands, primarily aimed at China there would be two responses. The first is that China would ensure with its own response that no other country ever attempted such a thing again. The consequences of that would have global consequences and America would be standing alone on that one. The second is that more widely, a global response would see the very quick end of American dominance in anything. No country would be able to economically or politically trade or be influenced by a country caught threatening the human existence in such a way. You might think that America has already got away with killing millions with its non-stop wars – and you’d be right. But the French, German’s, British, Canadian’s, Russian’s and so on would not tolerate their own being killed in such a way because the public outcry (protests/riots?) would cause governments to react to defend themselves.

For regular updates on the Cononavirus go to: