By Graham Vanbergen: The oil industry has dominated the global commodity market for a hundred years one way or another. In that time it has also been the cause of considerable geopolitical conflict – hardly surprising when you consider than more than four billion metric tons of oil is shipped worldwide every year. Approximately one third comes from the Middle East. America and Russia account for around 12 percent each of the world’s total oil production annually. There are around 1.7 trillion barrels of oil in known reserves and although Saudi Arabia boasts a global oil reserve of 15.6 percent, Venezuela boasts 17.6 percent. Europe is the world’s largest importer and road transport is the world’s largest consumer. Overall, nearly 100 million barrels of oil are consumed every single day. In 2016, Royal Dutch Shell, Exxon and BP had combined overall revenues from oil of around $620 bn. (1)

By contrast Alphabet (Google’s parent company), Amazon, Apple, and Microsoft are now the most valuable listed firms in the world leaving their energy stock competitors in the dust. Their profits are surging: they collectively racked up over $600bn in revenue last year (and rising) and banked $25bn in net profit in the first quarter of 2017. Amazon now captures half of all dollars spent online in America. Google and Facebook accounted for almost all the revenue growth in digital advertising in America last year. And although Facebook (listed 8th most valuable listed company) is by far the lowest cash generator of this top five, between it and Google, they captured 20 percent of global advertising expenditure. (2) The market cap of Apple, Google and Amazon is now a whisker off $2 trillion, truly eclipsing the aforementioned big three energy corps who boasts a paltry collective value of just $700 billion.

If you live in the United States, the biggest energy user in the world, the average person consumes about 2.5 gallons of crude oil per day; roughly one barrel every seventeen days; or nearly 22 barrels per year.

That same individual in terms of data is worth about $0.50 at any given moment to the tech companies. But that moment is extensively traded depending on who wants to sell you something or who wants that information. (3) In addition, we need the devices, software, data centres, communication and IT services – all of which now adds up to an industry worth a staggering £3.5 trillion per year. (4) 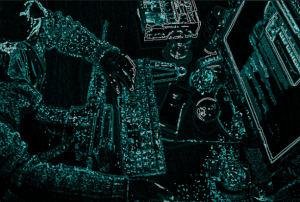 Ninety percent of the data in the world today has been created in the last two years alone. Our current output of data is roughly 2.5 quintillion bytes a day (source)

Data, the leading reason why tech exists in today’s world has overtaken oil as the number one traded global commodity and is now worth exactly double budgeted global defence spending.

Like oil and military spending, data is the new geopolitical ammunition of the 21st century.

Tech has spawned an industry with epic growth consequences, but the regulators have fallen so far behind any comprehensible programme of restraint, they find themselves in a dichotomy sandwiched between being targeted by the tech titans for threatening to do so or excoriated by their own citizens for allowing unfettered violations of their privacy.

American, European and UK antitrust enforcement has collapsed over the last decade or so. Skepticism over government intervention and neoliberal capitalism go hand-in-hand of course. Combined with the perceived irrelevance of antitrust in global markets due to globalisation, what you get is excessive corporate power with political influence that sweeps aside civil interest legislation with its vast money reserves. Hence, the huge surge in the modern day surveillance industry.

Back in May this year, The Observer wrote a 6,000 word article that commenced with this sentence: “A shadowy global operation involving big data, billionaire friends of Trump and the disparate forces of (Britain’s) Leave campaign influenced the result of the EU referendum. As Britain heads to the polls again, is our electoral process still fit for purpose?”

The article itself quoted Alex Younger, head of MI6 from last December, providing confirmation that government’s and their agencies all over the world are now threatened by big data:

“The connectivity that is the heart of globalisation can be exploited by states with hostile intent to further their aims. The risks at stake are profound and represent a fundamental threat to our sovereignty.”

During the next eight years, the amount of digital data produced will exceed 40 zettabytes, which is the equivalent of 5,200 GB of data for every man, woman and child on Earth (source)

To sum up this rather chilling exposé, the article goes on to say that military psychological warfare systems along with government contracts and American billionaires managed to swing the small percentages required to get Donald Trump into Washington and Brexit to become a reality. The latter broke just about all electioneering rules ever written.

The propaganda machines able to achieve such enormous political change is truly seismic whichever way you look at it.

In terms of Brexit, more money was spent with one obscure company located above a shop on the other side of the world than in any other campaign. The numbers involved speak for themselves. One week before the referendum that saw 33.5 million voters go to the polling stations, one third were still undecided but all it took was the persuasion of 1.3 million voters to change the course of British history. The geopolitical implications resulting from this new form of societal manipulation for Europe, America, NATO and the rest of the world cannot be under-estimated.

Interestingly, one of the military strategies used was to convince some targeted voters to stay at home and not bother voting at all – a ‘voter disengagement’ strategy was just as important as persuasion tactics.

A recent report from the London School of Economics determined that the UK’s electoral laws were “weak and helpless” in the face of an advertising onslaught that saw literally millions of targeted micro-ads pushed at undecided voters.

Generally speaking, wealth has a tendency to inhabit a right-wing environment and here we find a new tension string added to the ultra-sophisticated practice of dismantling democratic principles via algorithms.

The biggest online player in the world is, of course, Google. Notable left leaning websites have complained bitterly in recent months that new algorithms have crushed their online presence and been replaced with right leaning propaganda.

A good example of this is the high profile New America Foundation, a think tank that received $21m from Google’s executive chairman, Eric Schmidt. The organisation recently sacked an entire team for daring to agree that the EU was right to fine Google $2.7 billion for antitrust violations. Google funds hundreds of think tanks, fact checkers and the like to ensure this level of power is exercised over the public narrative the world over.

You could be forgiven for thinking that we are now using censorship engines, not search engines and far from searching the Internet, the Internet is searching you.

One should not forget where these dangerous global data-mining companies originate. As The Observer notes, it comes from deep within the military-industrial complex on both sides of the Atlantic. For instance, documents have been uncovered that confirm approval of such systems by the British defence establishment. One could conclude from this that Brexit was in fact by design, not by David Cameron’s political miscalculation as promulgated by the media.

This worrying fusion of psychology, propaganda, technology and military warfare systems being used against citizens is surely very worrying indeed. It makes you wonder why the top man at Google sits on the board of the Pentagon, itself providing the original seed capital that Google needed to succeed back in 1998.

The capture of every single aspect of every voter’s information environment makes targeting so much easier. And government’s around the world are happy to pay for such services. Is this a reason why profit taxation of these tech titans becomes so difficult?

The other interesting point that The Observer article mentioned was that Tamsin Shaw, associate professor of philosophy at New York University, who has researched the US military’s funding and use of psychological research for use in torture mentioned that: “The capacity for this science to be used to manipulate emotions is very well established. This is military-funded technology that has been harnessed by a global plutocracy and is being used to sway elections in ways that people can’t even see, don’t even realise is happening to them.” (5)

Let’s not forget on the other side of the equation that the theft of data is also causing huge problems as well, both domestically and geopolitically too. Not only is America (rightly or wrongly) using this as a basis for economically attacking its traditional foe Russia, with debilitating sanctions, other countries are as well, for their own reasons.

The other advantage these tech giants also have is their ability to stakeout entire industries, their own included, for potential threats to their own models of business and crush the competition. By knowing what people are searching for, sharing, discussing and buying they can understand early on what to develop or copy or simply devour competitors with ludicrous buy-outs. Data collection on this scale could stifle competition and certain innovations.

Moving on a step or two, we find China will be using data to govern its population with the roll-out of ‘social credit’ scores by 2020, Britain and America are arresting people prior to crimes being committed with the use of ‘pre-crime’ systems derived from data gathered from the Internet whilst citizen surveillance becomes endemic to all of civil society. All of this data is collected by private business and sold to clients and customers, proxy organisations and government’s alike.

Whether used for security, a better user experience or improved product services, data has in fact become our biggest enemy. Like it or not, the outcomes of democracy, important political decisions or the influencing of civil interest legislation, can now be pre-determined as the systems are now available to know what it takes to achieve a desired conclusion.

Antitrust authorities around the world need to wake up and step up to these emerging 21st century challenges. Traditionally, size has been used as a decision to intervene, nowadays data and its ability to influence the world we live in should be considered more closely.