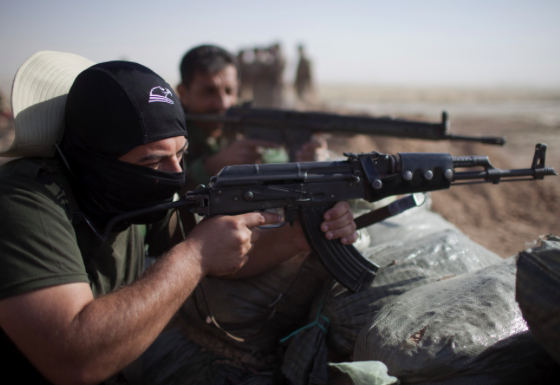 By Joseph Fitsanakis – IntelNews: The Islamic State in Egypt’s Sinai Province has declared war on the Palestinian militant group Hamas, in a move that experts say will furhter-complicate an already volatile security situation in eastern Egypt. Many observers see the group, Wilayat Sinai, as the strongest international arm of the Islamic State of Iraq and Syria (ISIS).

Known officially as ISIS – Sinai Province, Wilayat Sinai was behind the 2015 downing of Metrojet Flight 9268, which killed all 224 passengers and crew onboard, most of them Russians. The same group killed 311 people at a Sufi mosque in November of last year, in what has become known as the worst terrorist attack in Egypt’s modern history.

Israeli sources claim that, in the past, Wilayat Sinai has had limited cooperation with Hamas, the militant group that controls the Gaza Strip, a coastal section of the Palestinian territories that borders with Egypt’s Sinai Province. The two organizations are believed to have engaged in limited cross-border arms-smuggling, while some injured Wilayat Sinai fighters have been treated in Gaza Strip hospitals.

But the two groups have major ideological differences that contribute to their increasingly tense relationship. The Islamic State objects to participation in democratic elections, which it sees as efforts to place human will above divine law. It has thus condemned Hamas’ decision to participate in the 2006 elections in the Palestinian territories.

Additionally, even though it promotes Sunni Islam, Hamas is far less strict in its religious approach than the Islamic State, and does not impose Sharia (Islamic law based on the Quran) in the territory it controls. Furthermore, Hamas suppresses Saudi-inspired Wahhabism and its security forces often arrest ISIS and al-Qaeda sympathizers in the Gaza Strip.

In the past month, ISIS accused Hamas of having failed to prevent America’s formal recognition of Jerusalem as the capital of Israel. Additionally, ISIS is opposed to the support that Hamas receives from Iran, a Shiite nation that ISIS regards as heretical.

There are reports that Hamas has been quietly collaborating with Egypt and even Israel in recent months, in order to combat the rise of ISIS in the region. For several months now, the Palestinian group has exercised stricter control over its seven-mile-long border with Egypt.

It has rebuilt border barriers that had previously been destroyed and has installed security fences and a digital surveillance system. It has also launched a public-relations effort to shame the families of young men from Gaza who have joined ISIS forces in Sinai. In response to these moves, Wilayat Sinai has publicly urged its supporters to kill members of Hamas and attack the group’s security installations and public buildings.

The ISIS-affiliated group has also urged its members to eliminate members of the small Shiite Muslim community in the Gaza strip. According to experts, the decision by Wilayat Sinai to declare war on Hamas means that the group has now virtually surrounded itself with adversaries. The move may also increase informal collaboration between Hamas and the Israeli government, say observers.