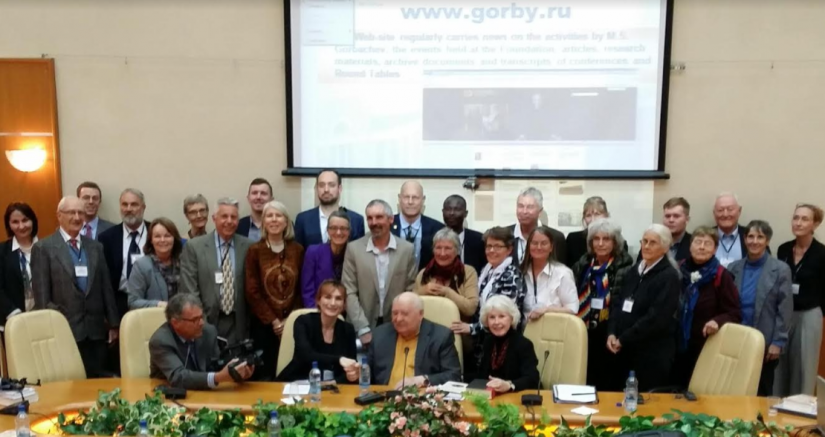 By Rick Sterling: I am in Russia for two weeks with a delegation of 30 Americans organized by the Center for Citizen Initiatives. We have had informative meetings with numerous people but the following two were especially interesting and relevant to international politics: Vladimir Kozin, member of the Russian Academy of Military Science, and Mikhael Gorbachev, former President of the Soviet Union.

Roots of the New Cold War

Vladimir Kozin is an arms control specialist and member of the Russian Academy of Military Science who has worked on arms control issues since the 1970’s. Kozin says that Russians see themselves being encircled by NATO. Of the 16 countries bordering Russia, eight have anti-Russia sentiments. He notes that the US military budget is twelve times greater than that of Russia and increasing.

Kozin says that it is a “fairy tale” that Russia interfered in the U.S. election. What is NOT a fairy tale is that the US spent a huge amount of money to influence Russian elections in the past and funded 400 Non Governmental Organizations which were part of the destabilization campaign in Ukraine leading to the 2014 coup.

Regarding key conflict points, Kozin says that Crimea was part of Russia since 1783. He notes that the despite the presence of 16,000 Russian troops and 18,000 Ukrainian troops, the Crimea plebiscite to re-unify with Russia was handled without violence, with huge turnout and overwhelming vote in favor.

Regarding hostilities in eastern Ukraine, Kozin questions why this has happened. If Scotland can consider secession from UK and Catalonia from Spain, whats wrong with Donbass (eastern Ukraine) wanting more autonomy within Ukraine?  Why has Ukrainian President Porokshenko turned to military conflict instead of negotiating with the forces in eastern Ukraine?

Kozin believes it is vital to have an arms control summit meeting between Presidents Trump and Putin. He thinks we should work toward the complete elimination of nuclear weapons by 2045. In the meantime, the easiest way to reduce tension and the risk of war would be an agreement on “No First Use of Nuclear Weapons”.

A Nuclear War Cannot Be Won

The former President of the Soviet Union, Mikail Gorbachev, is 87 years old but still sharp.  He told us, “This is a time to be concerned. We should worry about relations between our two countries….. things cannot continue as they are.”

At the next summit meeting, Reagan continued lecturing Gorbachev. After listening for 15 minutes. Gorbachev stopped Reagan saying, “That’s enough. If you want to talk as equals we can go very far. Differences can be bridged. Problems can be resolved. But as equals.” Reagan asked how the Soviet Union would respond if the United States was at risk because of some kind of natural calamity. When Gorbachev said they would want to help, not take advantage, the mood changed.

Gorbachev recalled his own friendly experience talking with average Americans. He suggested that perhaps the USA needs its own perestroika.

He reminded us that it was President John F Kennedy who said “We need peace but not a Pax Americana ….. not merely peace for Americans but peace for all men and women”.

Gorbachev continued saying, “ The current situation is not right. We need to change that. Let us stop provoking each other. Let us stop trying to tear up other countries. …. Our two countries are still central to world peace. We need peace in order to resolve other world problems.  1% of the world controls 90% of the wealth. The ruling class is happy with this but hings cannot continue as they are …. budgets smell of gunpowder….. fear is being cultivated. This is resulting in a new arms race.”

Gorbachev asked “Does the USA want Russia to just submit?” Referring to Russia’s history with invasions by France in the early 1800’s and Germany in the 1940’s he he explained “This is a country that can never submit…. There will be no winners in a nuclear war.”

In a sober assessment of Trump’s first 100 days as President, Vladimir Kozin concluded, “Aggravating these facts of life is the deep degree of mistrust between Washington and Moscow, which the Americans spawned and have continued to nurse.  A vicious circle has emerged in the interrelationship between weapons and trust … Clearly such an irrational phenomenon cannot go on indefinitely.”

From both Kozin and Gorbachev the message was clear: We need to do something to restore discussion and stop the slide toward ever greater tension and danger.

Rick Sterling is an investigative journalist – He can be contacted at rsterling1@gmail.com