The Damning Briefing note of the OPCW Fact-Finding Mission on the chemical attack in Douma, Syria 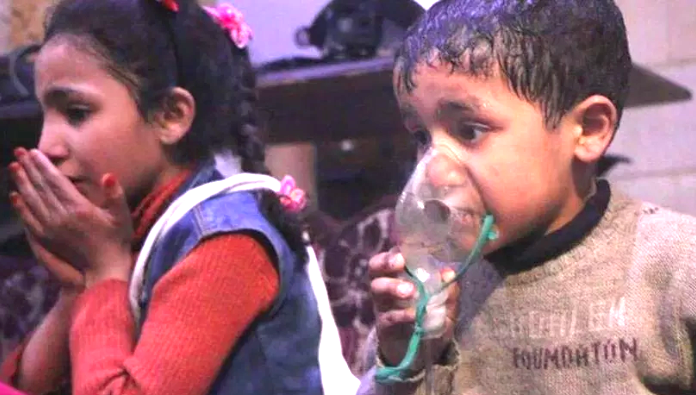 If you are not up to date with what happened in Douma, or its significance, read Robert Fisk’s report via The Independent entitled – The search for truth in the rubble of Douma.

Then read the following briefing note by the Working Group on Syria, Propaganda and Media below.

Summary
This briefing note reviews the Final Report of the OPCW Fact-Finding Mission on the alleged chemical attack in Douma on 7 April 2018, released on 1 March 2019. We focus on the methods and the conduct of the investigation.

The FFM report attributes all relevant observations to a chemical attack, without considering any competing explanation. The report’s handling of evidence raises several concerns:

The report merges all witness testimony into a single account, without any analysis of gaps and discrepancies.

The FFM sought assessments in October 2018 from unidentified experts on the “trajectories” of the gas cylinders assuming they had been dropped from the sky, without considering alternative routes of delivery such as stairs. No explanation is given for why, if these assessments were necessary, they were not obtained in April 2018 when the experts could have inspected the sites.

The report excludes media files without timestamp metadata, but includes files with timestamps that are incorrect. A serious analysis of this material would have combined all available evidence to infer the timing and sequence of images with or without metadata.

The FFM declined to proceed with exhumations which might have allowed victims to be identified.

The report is written to make it appear as if the witnesses who reported that the hospital dousing scene had been staged were never formally interviewed by the FFM, downgrading their testimony to “other open-source video material”.

The report ignores the visual evidence that the fire in the room below the cylinder at Location 2 had been lit before the cylinder had discharged its contents.

The report attributes the visual evidence that the victims at Location 2 had made no attempt to escape to “an agent capable of quickly killing or immobilising”, without considering the possibility that the victims had been killed elsewhere.

The report records, without explanation, that the Team Leader was “redeployed for information-gathering activities from all other available sources” three days after arriving in Damascus. This decision could have been taken only by the Director-General.

OPCW’s conduct of the investigation of this alleged chemical attack violates rules laid down in the Chemical Weapons Convention, which do not empower the Director-General to interfere with the investigation once the inspectors have been dispatched, and stipulate that the final report must be produced within 30 days of the inspection team’s return to base.
From the contrast between the shortcomings of this anonymous report, and the professionalism of a report on another investigation by the Fact-Finding Mission that was signed by the Team Leader Kalman Kallo and released in July 2018, it is reasonable to infer that Kallo did not write this Final Report. A proposal that all members of the FFM team should give a briefing on the Final Report was voted down by the OPCW Executive Council on 14 March 2019.

The apparent removal of the Team Leader, the exclusion of evidence that the hospital dousing scene was staged, the delay in producing this anonymous report and the refusal to allow a briefing by the FFM team raise concerns that criminal activities – the staging of a chemical attack using the bodies of civilians – have been covered up. In most jurisdictions, the duty to disclose such a cover-up would override the confidentiality agreements that OPCW employees are required to sign.

This report discredits OPCW as a source of impartial investigation and undermines it as an international institution that is fit to be entrusted with maintaining the prohibition of chemical weapons, let alone with the remit to “identify the perpetrators of the use of chemical weapons” assigned by a resolution of the Conference of States Parties in June 2018.