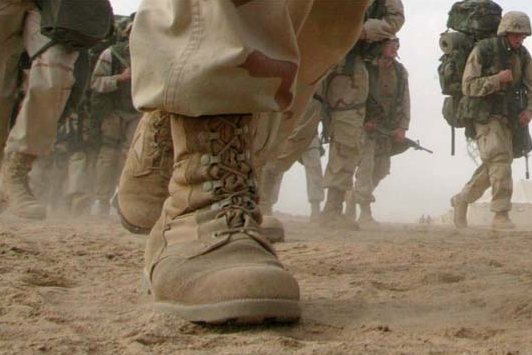 By Graham Vanbergen – Libya has continued to descend into what can only be described as a state of complete anarchy since the killing of the country’s strongman, Colonel Muammar Gaddafi. The Libyan dictator was killed in 2011, as a result of a an uprising heavily supported by Western powers, spearheaded by Britain and France and ultimately backed by NATO. Arguably the strongest faction in the ongoing Libyan Civil War is the so-called Tobruk-led Government, which is affiliated with the Libyan National Army. Things are not looking good now that Russia has made an appearance with possible ambitions to regain a toe-hold with its former ally.

The Guardian reports that “Russia appears to have deployed special forces to an airbase in western Egypt near the border with Libya in recent days, in a move that adds to US concerns about Moscow’s deepening role in Libya.”

Reuters news agency also reported that Russian special forces troops had been seen on the border between Libya and Egypt.

IntelNews confirms the same with its report stating that Russia may have become the latest country to deploy special forces soldiers in Libya, according to news reports citing anonymous United States officials.

“information came from “two US officials, who spoke on condition of anonymity”. Unnamed “Egyptian security forces”, who said a 22-member Russian paramilitary team had set up an operations base in the Egyptian town of Sidi Barrani, which is located 60 miles from Libyan territory.

The commander of the Libyan National Army is Field Marshal Khalifa Haftar, an old adversary of Colonel Gaddafi, who lived in the US under Washington’s protection for many decades returned to Libya in 2011 to participate in the war.

The Tobruk-led Government is ostensibly supported by the US. However, its military wing, led by Haftar, operates semi-autonomously, and some believe that Haftar has aspirations to lead his own armed faction in Libya. Last November, Haftar visited Moscow, where he met with senior government officials, including Russian Foreign Minister Sergei Lavrov. There are reports that the Russian special forces troops alleged seen in Egypt are operating in support of Haftar.

Last week, a spokesman for the Tobruk-led government told Russian media that Moscow had promised to provide it with funding and military aid. Earlier this year, it was confirmed that a number of Russian private security contractors were in Libya and were providing services to Haftar’s militias. On Tuesday, Moscow denied the Reuters report and accused “certain Western mass media” of “spreading false information from anonymous sources” in order to “smear Russia”.

A few months ago British and Jordanian special forces were confirmed on the ground in Libya and had been since January 2016 according to a leaked memo from a confidential briefing delivered to US lawmakers by the king of Jordan.

Last year US forces were also confirmed operating in western Libya, while French special forces had established themselves in the east around Benghazi.

British special forces, were again confirmed as fully operational in June last year where it was reported they were caught up in a gun-battle near Serte where three British citizens who had travelled to join ISIS were killed.

The arrival of Russian forces in Libya presents a new problem just like it does in Syria. Egyptian security sources have actually offered more confirmed detail, describing the Russian special forces unit, but declined to discuss its mission. They added that Russia also used another Egyptian base further east in Marsa Matrouh in early February this year. Egypt is straddled by Iraq and Syria to the east and Libya to the west and has a strong interest in arresting any terrorist activity given its own fragile leadership.

Like Syria, Russia appears to been asked to assist in the battle against what looks like a new level of upcoming instability in Libya. Whilst ISIS and other terrorist groups have poured into the country during last year, a proxy war between Russia and the West, just like the Syrian conflict could easily flare up.

The Libyan president of the house of representatives, confirmed that Russia was assisting Haftar’s forces. “We asked the Russian government to help us with training the soldiers in our armed forces and the repair of military equipment by Russian specialists because the majority of our officers studied in Russia and many speak the Russian language and know how to use Russian equipment,” Aguila Saleh Issa said. “They promised to help us in the fight against terrorism.”

The U.S. military declined to comment. U.S. intelligence on Russian military activities is often complicated by its use of contractors or forces without uniforms, officials say.

Questions about Russia’s role in north Africa coincide with growing concerns in Washington about Moscow’s intentions in oil-rich Libya. One U.S. intelligence official said Russia’s aim in Libya appeared to be an effort to “regain a toe-hold where the Soviet Union once had an ally in Gaddafi.”

“At the same time, as in Syria, they appear to be trying to limit their military involvement and apply enough to force some resolution but not enough to leave them owning the problem,” the official added, speaking on the condition of anonymity.

Asked by U.S. Senator Lindsey Graham whether Russia was trying to do in Libya what it did in Syria, the top U.S. military commander overseeing troops in Africa, Marine General Thomas Waldhauser said: “Yes, that’s a good way to characterise it.”

I just read your article posted at Global Research: “Will Libya Become The New Syria Now That Russian Forces Have Arrived?”

We speak with the tribes of Libya on a daily basis. We are the official spokespersons for the great tribes of Libya and were with them when NATO invaded their country using a lie (false flag revolution) to perpetrate the takeover of Libya. You were correct in your report – there are Russians in Sidi Barani, they are not troops they are trainers (instructors) . But, you are wrong about Russians arriving on Libyan soil – There are no Russian troops on Libyan soil at this time. The only foreign troops in Libya at this time are: Italian troops (about 400 of them) supporting the Misurata Militias  supporting Haftar.

But none of this is being reported by any media.

The Toburk Government is the Libyan House of Representatives and was duly elected, they are somewhat associated with Haftar but there is much trouble between them as Haftar has gone (as per usual) a bit rogue . It is his dream to be the leader of Libya but that will never happen as all Libyans know he is a traitor, is CIA, was found guilty of being a traitor years ago in absentia after he ran off with his CIA handlers to the US.

The biggest problem is Libya now is the Misurata militias, these were the same group of radicals that Hillary Clinton, Obama and John McCain backed in destruction of Libya. These militias are full of Muslim Brotherhood, Ansar Al Sharia, Al Qaeda, LIFG and other radical groups/mercenaries. They are being supported by Turkey and Qatar. This is one of the major problems in Libya today, as we speak they are controlling Tripoli by force and robbing homes at will of innocent people. There is no news media and no one to report these continuing heinous crimes against humanity in Tripoli.

The other problem the Libyan tribes have is the 2 puppet governments sitting in Tripoli. The main one is the UN puppet government led by Serraj, another radical along with his gang of radicals installed by the UN using a German representative to speak for Libya. No one in Libya recognizes this government yet the media constantly refers to Serraj as the PM of Libya (today he requested 800 million Euros from the EU to help illegal immigration over which he has no say). The other government is the old GNC puppet government full of Muslim Brotherhood installed by Clinton and NATO after 2011. These criminals agreed to an election in 2014 of which they were all thrown out, instead of leaving they threatened all the duly elected men and forced that government to move to Tobruk.

I am writing to you because I appreciate your interest in Libya and your article. I also appreciate very much Global Research and have tried many times tried to reach out to them and either pass current intel from on the ground in Libya or put them in touch with the tribes of Libya for the real truth. But never had any response.

If you want to research who we are: James and JoAnne Moriarty, either Google us or go to our website at www.libyanwarthetruth.com

We were business people who witnessed the crimes against humanity committed in Libya in 2011, we have been soft killed and black listed by our own government because we are eye witnesses. Our only goal now is get the truth out to the world, support the great tribes of Libya (all Libyan people) and get them a voice because they have not had one since 2010.