100 years from the greatest power on Earth to political implosion 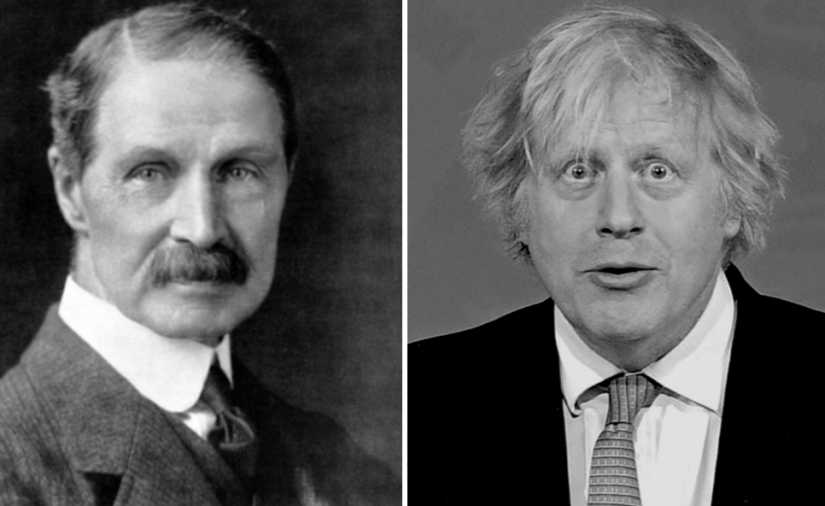 TruePublica Editor: It is said that great power ascendancy (over the long term) correlates strongly to available resources and economic durability. In this context, it could also be argued that the Conservative party in Britain has been one of the most successful since the rise of modern political democracies. The Conservative Party was created in the 1830s by Robert Peel.

It was another 90 years before the British Empire would cover a quarter of the world and rule over 458 million people. At the time, world population stood at two billion. It was the largest empire in human history. The pinnacle of this great power is commonly accepted by historians as 1922. In the period 1815 to 1912, the world was reportedly at peace under ‘pax Britannica’ or British peace (given the times).

Peel, Disraeli, Baldwyn, Churchill and Thatcher are just a handful of some of the most influential and remarkable Conservative party figures that make up a large part of Britain’s identity. There have been two events that have been heavily bookmarked as the end of empire, the Suez Crisis of 1957 and the transfer of Hong Kong to China in 1997.

The post-war fall has been dramatic and although mostly peaceful, it has been economically painful and has ended in a final nail in Global Britain’s coffin – Brexit, a desperate last-gasp effort at revitalising some of its former glory. For this to succeed, Britain needed leadership that was truly visionary and unifying.

Today, Boris Johnson – a man bereft of any form of moral compass, is leading the Conservative party towards implosion with his chaotic and often shambolic visionless leadership. Unfortunately, this government is piloting the country into a spiralling downward path like that taken by an out of control aircraft heading towards its inevitable crash-landing. In 2022, exactly 100 years from the greatest power on the planet to turmoil, discord and disorder – and lost on the global stage.

Brexit was the promise of economic durability in that it would hugely increase our identity and global prowess as a mid-size country, punching way above its weight. Perhaps it was possible but Brexit was built on a raft of lies that has led the country to little more than turmoil. This is because it was built on an ideology, not a plan. Some at the heart of this ideology, like Rees-Mogg and the extremists that inhabit the ERG, believe the EU to be a Catholic project to be defeated by Christian nationalism. Others, like Daniel Hannon, the first director of the ERG, currently serving as an adviser to the Board of Trade believe they should take us back to the early days of the Whigs (a British political faction) who purged the parliamentary government from all major positions in government, the army, the Church of England, the legal profession and local political offices. Hannon even proudly describes himself as an ‘Old Whig‘. And it would be true to say that, unlike most PMs up to Thatcher who served in the war and knew working-class soldiers who they depended on and respected, today they live in an elitist bubble and have grown to despise wider society.

Britain’s exit from the EU has had significant (dark-money) funding from America and its religious right. The language of this emergent right-wing power states that – “the European Union is an ideological construct based on an Enlightenment rational worldview where there is no room for loyalty. Every day the E.U. finds new ways to express contempt for your loyalty to nations…. Every time you use a euro banknote, you express a tiny bit of disloyalty to your own people and your own past.”

To gain a foothold and move into the corridors of power,  it took lies, corruption and subsequently power grabs. Supported by donors and dodgy deals, a dogmatic culture is delivered to divide and rule. Anarchy by the rich and powerful dominates over our lives. December 2021 looks like some sort of advent calendar of chaos as every day now starts with yet another blow to decency, honesty or integrity from those who are supposed to set an example – the lawmakers.

Imagine, under the reign of George V and leadership of Stanley Baldwyn, the emergence of the 1922 Committee of Conservative backbenchers (a Tory platform for the majority rather than a focus for discontent), staring in horror at their leader of 2022 in the guise of Boris Johnson.

With a string of scandals that would have brought down governments, Johnson’s affairs, dodgy deals and accusations of being a national security, whilst allowing dark money from unnamed foreign actors to bankroll an economically destabilising ideology, somehow, today, seems the new norm. Allowing such a man into Downing Street smacks of real desperation. Is this really the best Britain can do?

Think, for instance, of Jonathan Aitkin who lied about who paid for a couple of nights hotel accommodation in Paris when he was Minister for Defence Procurement in 1997. After losing his libel case, he went to prison, lost his home and subsequently just about everything through bankruptcy. Fast forward to Johnson and what now does a PM need to do to be made accountable for his actions?

And what of that unifying vision? Perhaps, in a modern world where Britain no longer has military, economic or diplomatic supremacy and cannot dominate others, that as a country we could have strived to be the best country in the world to live in. To have the best education, public health service and domestic security would be goals to strive for. Perhaps the best way to deliver those three aspects of our lives is to take the management of them out of the hands of politicians who have done such a dreadful job of it – and hand them over to citizen and expert-led committees with long term horizon goals and a percentage of the annual tax take enshrined into law. Attempts at the privatisation models of health and education have both failed and politicisation of all three have done immense damage as they only ever end up being political footballs ripe for ‘reform’ every few years, which subsequently just fails again.

One hundred years ago, Britain was a global superpower. In 1922, Andrew Bonar-Law was a Conservative and the prime Minister (he died of throat cancer the following year). He was the first PM to be born outside of the British Isles. Despite never having served in the Cabinet and trailing third after Walter Long and Austen Chamberlain, Bonar Law became leader when the two front-runners withdrew rather than risk a draw thereby splitting the party. In his opening speech as leader, he said that the party would be one of principle, and would not be reactionary. Compare that to Johnson’s divisive rhetoric en route to the same office, after sacking centrists, lying to the Queen, illegally proroguing parliament, lying to the House and the people and now mocking them all with the type of disdain that dictators in third world countries do to their own people.