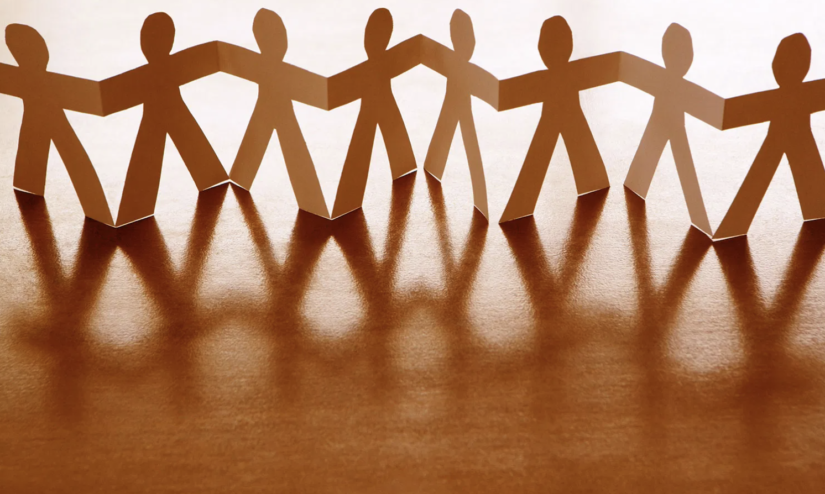 By TruePublica: It wasn’t an American president who came up with these words, nor was it, as many claim in the new testament. The phrase “united we stand, divided we fall” is actually attributed to the ancient Greek storyteller Aesop around 560BCE.

Two and half thousand years later, this famous political slogan could not be more fitting than for the Britain of today.

Just a few months ago, Britain had elected Boris Johnson in yet another sloganised election to ‘Get Brexit Done.’ But reaching that 80 seat majority meant driving the wedge through civil society even harder than before the EU referendum and much more than it already was. The political campaign was by far the very worst of anything seen in Britain. It exposed a mainstream media who ganged up against the political opposition, it saw rampant racism and division promoted by a protagonist who idolised a bygone Churchillian era, whose marketing team corralled its audience inside a fortress of misinformation and propaganda that excluded the entry of inconvenient opinions. Sadly, nothing has changed.

The DUP, a political entity hardened by violence and thuggery was rightly jettisoned from a Conservative party that no longer looks, feels or represents broad church centre right compatriots. Armed with little more than bigotry and arrogance, Johnson and his bully boys set to the task of ripping Britain out of the centre of Europe

It was Churchill who entrenched the view that Britain was at its best when on its own, when in fact it wasn’t. Britain didn’t win WW2 on its own. It was a cog in a massive coalition that won the day – confirming if anything, that Britain was far better at the centre of morality, justice and integrity. Today we have a rabble of liars perpetuating the myth that nothing but the free market is best for us – by courting the very worst representative of it – America.

America doesn’t care for the inconvenience of the Covid outbreak. It has 50,000 suicides each year, with so many murders that only four other countries in the world top it (Brazil, India, Mexico, South Africa) and 70,000 drug overdose deaths. It has 25 per cent of the world’s prisoners with 5 per cent of world population. The American healthcare system is one of the most savage and exploitative in the Western world. A 2017 survey had found about 70 million Americans either have difficulty paying for medical treatment or have medical debt – and it will be worse in 2020. Two-thirds of all bankruptcies relate to medical bills. It’s a shocking failure of free-market economics to witness tens of millions now thrown out of work because of the virus and with it their healthcare cover at a moment of greatest need.

The likes of Johnson, Patel, Raab, Rees-Mogg, Baker and Francois – all whipped up by a techno-freak in the shape of Dominic Cummings, represent the very worst of political rabble-rousers, promoting the hardest of hard Brexit’s. It’s so American and so anti-British. They broke the relations of families across the land, undermined the institutions of civil society and promoted racism that saw hate crimes soar as a means to an end. Instead of stiff upper lip, keep calm, stoic Briton’s – we saw the opposite in raging nationalism and hatred.

It is here where Britain falls – divided.

About half of the country believes the government is doing a good job, the other half believes it is doing a bad job. The former is looking at how the state is supporting wages in the face of a virus, the latter about the failure of state to protect it from the virus.

Right now, almost half the country now says that Brexit is less important (48 per cent) because of the physical and economic damage the virus has caused. Just four months ago almost 55 per cent said it was a higher priority than the economy. 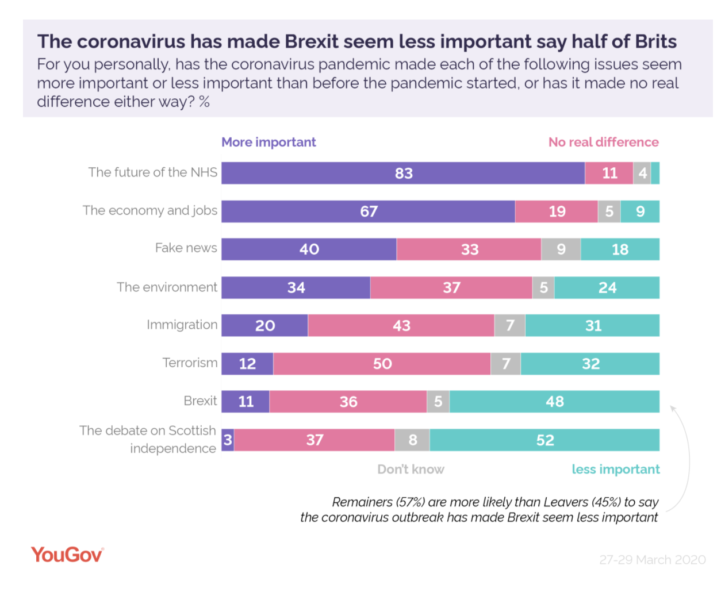 If the YouGov poll is to be believed Brexit has now fallen back down to where it was before the 2015 general election. It was David Cameron who added the EU referendum to shore up what he miscalculated was his flagging electoral support. It is unsurprising that the NHS is currently the nations’s No1 concern or that the economy and jobs is second. It is clear that the public are fed up with fake news and that successive governments have failed on the environment.

The Boris Johnson government are now in one almighty quagmire of their own making. Brexit came about, helped in large part, by fake news, misinformation and propaganda. The Prime Minister was elected, in large part, to ‘Get Brexit Done.’ And yet, the public are now fed up with the lies, fed up with Brexit and want the exact opposite to what the Tories ideology over the last forty years has uncovered – they want a fully funded NHS and positive, tangible action over the environment in which they live. If COVID-19 taught us something – it was that our lungs need clean air and that the free-market failed the public.

If the Tories pursue Brexit, sign a transatlantic free-trade deal with America, which will reduce environmental standards all as a result of manipulated news – Britain will either fall divided or make a political stand. It is time that fake news, fake politicians and fake ideologies are consigned to the bin and that Britain stands united in its quest to rebuild itself as a nation that always punched above its weight.