And the betting for the 4th Tory leader since Brexit is … 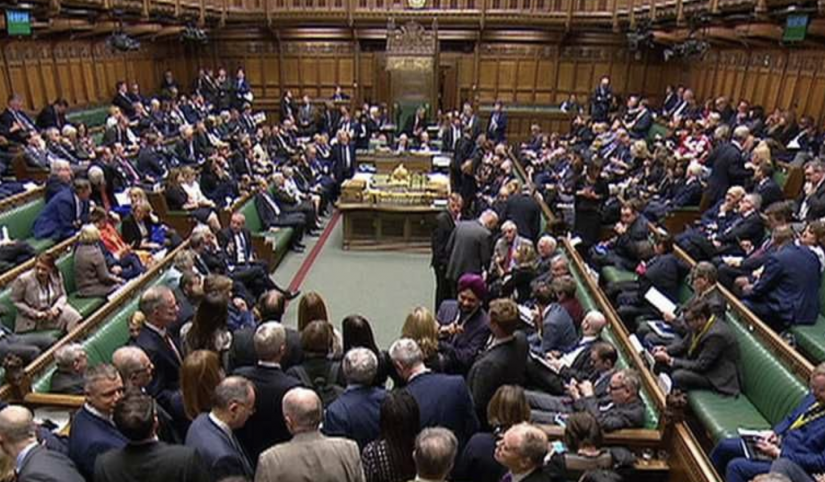 TruePublica Editor: If anyone had told you before the 2016 EU referendum that a Brexit would see three Tory Prime Ministers in office in three years, with the last one democratically voted in by almost no-one – that Boris Johnson would have his knees under the table at No10 being advised by Jacob Rees-Mogg and Steve Bannon, whilst being eulogised by Donald Trump – you would have thought they’d gone completely insane.

The betting is on 49% for a general election in 2019 and 28% for 2020 – so either way, the money is on voters being asked to decide if BJ has a mandate or not. Only this time, voting will not just be about being a socialist or a capitalist. It’s going to be about Brexit and the trouble with Brexit is it is so divisive – it is now turning into a culture war. It will be very American like – an all-out nasty battle of the foul-mouthed, littered with lies, misinformation and outright propaganda.

Word on the ground in the corridors of power is that BJ’s new cabinet had no option but to sign a declaration of obedience over Brexit if they want seats at the top table. Politically, this is seriously going off-script for a normal democratic country. Today, Britain has the most right-wing government in modern history. And as have I mentioned before, this government will attack Remainers as anti-democratic, as anti-British, lacking loyalty or even brand them as traitors. From the fanatical fringes comes death-penalty Patel at the Home Office, geographically challenged Raab at the Foreign Office and the seriously deluded Jacob Rees-Mogg who will be attending cabinet as leader of the House.

Then there’s Dominic Cummings, the demagogic mastermind behind Vote Leave. He was found to be in contempt of parliament for refusing to appear before MPs and was described before being sacked by Gove, himself a right-winger – for being a ‘career psychopath’.

The resignations and brutal purge of a dozen cabinet ministers was unprecedented – joining truly bitter and resentful backbenchers who are supposed to be on the same side.

Johnson’s No 10 speech was littered with nationalistic jingoism, puffed up with empty unfunded promises and above all lacking in anything remotely resembling a statesman. But, the one thing this new PM promised yet again is that by hook or by crook – Britain is leaving the EU on the 31st October. He will inevitably blame them for Britain crashing out.

The Tory government of the last three years is now dispensing of PM’s and frontbenchers faster than the Whitehouse in DC ejects anyone who dares to twitch at Trump’s vandalism of the world order.

However, one thing we should not forget. We now have a government in office who is a Vote Leave government. There are no excuses left, if Britain crashed out of the EU – it will be their fault and they need to own it.

Rees-Mogg is now the second favourite to succeed BJ. Yes, you read that right.

Sajid Javid in now the favourite to succeed Johnson. I’m not sure if we are living in a soap-opera any more. Westminister-Enders it is then.

Mike Smithson over at Political Betting has a few thoughtful words about our new PM.

Beleaguered prospective Prime Minister Boris Johnson is not having a good start to the week.  Take his Monday. Sir Alan Duncan resigned as Foreign Office minister, making it clear that he would vote against Boris Johnson in a vote of no confidence if Britain was heading for no deal (indeed, he sought the opportunity for the House of Commons to express its lack of confidence in Boris Johnson before he became Prime Minister).  Charles Elphicke, a reliably Brexity MP, was charged with sexual offences: as well as the government losing a Conservative MP (the whip had to be withdrawn again), there must be some question whether the seat will remain in Tory hands for any length of time. And his shaping of his presumed Cabinet is proving controversial, with him apparently requiring an oath of allegiance to no-deal Brexit, thus excluding a substantial chunk of his own party from office. It’s not as though he’s overflowing with talent at his disposal (though he may have made more promises than he’s able to keep).  Philip Hammond, David Gauke and Rory Stewart have already recused themselves from a government led by him. 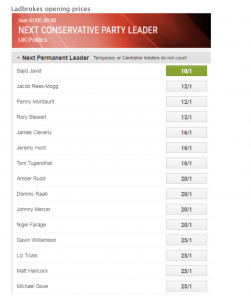 Ladbroke opening prices – next Tory leader as at 23rd July 2019

Apologies for the clarity of the image.