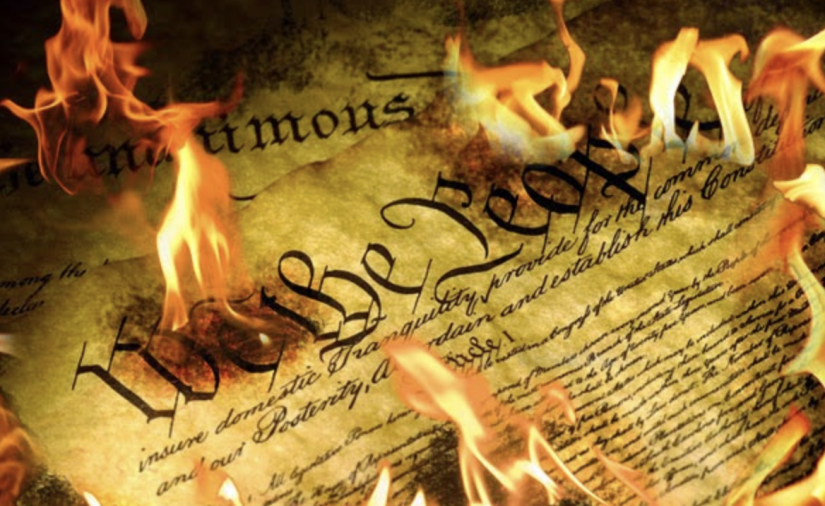 TruePublica Editor: The Johnson government has just been called out for what it really is. It acted, under the autocratic tendencies of Dominic Cummings, in a wholly untrustworthy way, without any consideration or respect for the rule of law. It has led to what amounts to a degenerate and unedifying spectacle of a British prime minister unable to even confirm that he would even obey the law. This pitted the government that makes laws against the supreme court that upholds them. Without the rule of law, the country would break down.

What we witnessed two days ago in the British Supreme Court is the manner in which the British constitution is supposed to work. Unlike the Johnson government, it operates on the basis of trust and proper respect for the rule of law. Without it, democracy dies. Without it, dictators and authoritarians emerge, Without it, the police state emerges. In Britain, irrespective of the crisis, Brexit has shown us all something – everyone is accountable in the end.

On the very same day that Johnson is made accountable for his actions, The President of the United States is being called out too and impeachment hearings will likely start. In the meantime, America’s constitution is disintegrating. Here is the last account of how daily life for ordinary people is affected by a failing constitution written by John W Whitehead –  a very well known constitutional attorney from Virginia.

It’s been 230 years since James Madison drafted the Bill of Rights—the first ten amendments to the Constitution—as a means of protecting the people against government tyranny, and what do we have to show for it? Nothing good. In America today, the government does whatever it wants, freedom be damned.

We can pretend that the Constitution, which was written to hold the government accountable, is still our governing document, but the reality of life in the American police state tells a different story.

“We the people” have been terrorized, traumatized, and tricked into a semi-permanent state of compliance by a government that cares nothing for our lives or our liberties.

The bogeyman’s names and faces have changed over time (terrorism, the war on drugs, illegal immigration, etc.), but the end result remains the same: in the so-called named of national security, the Constitution has been steadily chipped away at, undermined, eroded, whittled down, and generally discarded to such an extent that what we are left with today is but a shadow of the robust document adopted more than two centuries ago.

Most of the damage has been inflicted upon the Bill of Rights.

“A recitation of the Bill of Rights—set against a backdrop of government surveillance, militarized police, SWAT team raids, asset forfeiture, eminent domain, overcriminalization, armed surveillance drones, whole-body scanners, stop and frisk searches (all sanctioned by Congress, the White House, the courts and the like)—would sound more like a eulogy to freedoms lost than an affirmation of rights we truly possess.”

Here is what it means to live under the Constitution today.

The First Amendment is supposed to protect the freedom to speak your mind, assemble and protest nonviolently without being bridled by the government. It also protects the freedom of the media, as well as the right to worship and pray without interference. In other words, Americans should not be silenced by the government. To the founders, all of America was a free speech zone. Despite the clear protections found in the First Amendment, the freedoms described therein are under constant assault.

The Second Amendment was intended to guarantee “the right of the people to keep and bear arms.” Essentially, this amendment was intended to give the citizenry the means to resist tyrannical government. Yet while gun ownership has been recognized by the U.S. Supreme Court as an individual citizen right, Americans remain powerless to defend themselves against SWAT team raids and government agents armed to the teeth with military weapons better suited for the battlefield.

The Third Amendment reinforces the principle that civilian-elected officials are superior to the military by prohibiting the military from entering any citizen’s home without “the consent of the owner.” With the police increasingly training like the military, acting like the military, and posing as military forces—complete with heavily armed SWAT teams, military weapons, assault vehicles, etc.—it is clear that we now have what the founders feared most—a standing army on American soil.

The Fourth Amendment prohibits government agents from conducting surveillance on you or touching you or invading you, unless they have some evidence that you’re up to something criminal. In other words, the Fourth Amendment ensures privacy and bodily integrity. Unfortunately, the Fourth Amendment has suffered the greatest damage in recent years and has been all but eviscerated by an unwarranted expansion of police powers that include strip searches and even anal and vaginal searches of citizens, surveillance (corporate and otherwise) and intrusions justified in the name of fighting terrorism, as well as the outsourcing of otherwise illegal activities to private contractors.

The Fifth Amendment and the Sixth Amendment work in tandem. These amendments supposedly ensure that you are innocent until proven guilty, and government authorities cannot deprive you of your life, your liberty or your property without the right to an attorney and a fair trial before a civilian judge. However, in the new suspect society in which we live, where surveillance is the norm, these fundamental principles have been upended. Certainly, if the government can arbitrarily freeze, seize or lay claim to your property (money, land or possessions) under government asset forfeiture schemes, you have no true rights.

The Seventh Amendment guarantees citizens the right to a jury trial. Yet when the populace has no idea of what’s in the Constitution—civic education has virtually disappeared from most school curriculums—that inevitably translates to an ignorant jury incapable of distinguishing justice and the law from their own preconceived notions and fears.

The Eighth Amendment is similar to the Sixth in that it is supposed to protect the rights of the accused and forbid the use of cruel and unusual punishment. However, the Supreme Court’s determination that what constitutes “cruel and unusual” should be dependent on the “evolving standards of decency that mark the progress of a maturing society” leaves us with little protection in the face of a society lacking in morals altogether.

The Ninth Amendment provides that other rights not enumerated in the Constitution are nonetheless retained by the people. Popular sovereignty—the belief that the power to govern flows upward from the people rather than downward from the rulers—is clearly evident in this amendment. However, it has since been turned on its head by a centralized federal government that sees itself as supreme and which continues to pass more and more laws that restrict our freedoms under the pretext that it has an “important government interest” in doing so.

As for the Tenth Amendment’s reminder that the people and the states retain every authority that is not otherwise mentioned in the Constitution, that assurance of a system of government in which power is divided among local, state and national entities has long since been rendered moot by the centralized Washington, DC, power elite—the president, Congress and the courts.

If there is any sense to be made from this recitation of freedoms lost, it is simply this: our individual freedoms have been eviscerated so that the government’s powers could be expanded.

Yet those who gave us the Constitution and the Bill of Rights believed that the government exists at the behest of its citizens. It is there to protect, defend and enhance our freedoms, not violate them.

It was no idle happenstance that the Constitution opens with these three powerful words: “We the people.”

We the citizenry are the arbiters and ultimate guardians of America’s welfare, defense, liberty, laws and prosperity.

As I make clear in my book Battlefield America: The War on the American People, we have the power to make and break the government.