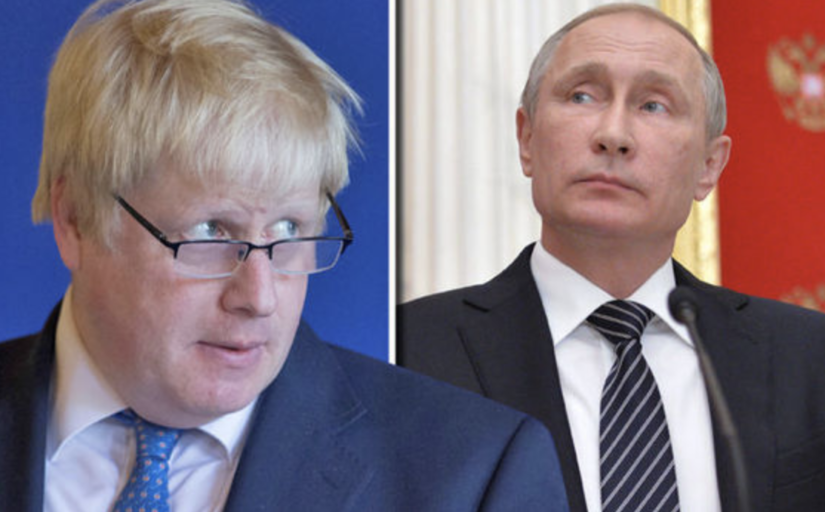 The hashtag #ReleaseTheRussianReport went viral and was trending inside Twitters top 10 for a time as the potentially explosive story was put under wraps by Boris Johnson’s government. Was it any surprise that the Russia Report was going to be leaked – at least in part. At the time of writing, we have no idea how many mainstream media outlets in Britain have been warned by the government not to print any leaks. But in America – the leaks have started.

Russia’s influence has reached deep into the British establishment and successive UK governments have turned a blind eye to it, British parliamentarians were warned, according to multiple sources familiar with testimony given to a parliamentary inquiry in this leak.

Members of the cross-party Intelligence and Security Committee (ISC) were told that Moscow had built up a network of friendly British diplomats, lawyers, parliamentarians and other influencers from across the political spectrum. One witness described the development as “potentially the most significant threat to the UK’s institutions and its ways of life,” according to testimony seen by America’s CNN.

Members of the ISC are appointed by the government and must go through a strict vetting process and after the last election, in 2017, it took six months to reconstitute the committee.

The ISC, which provides oversight of Britain’s intelligence and security agencies, and whose nine members are bound by the UK’s Official Secrets Act, completed its investigation in March. Its report was submitted to Downing Street for approval on October 17, after a lengthy period of clearance with the security services. The report is heavily redacted for the purposes of national security

Moscow had built up a network of friendly British diplomats, lawyers, parliamentarians and other influencers from across the political spectrum – described as “potentially the most significant threat to the UK’s institutions and its ways of life.

The committee’s unpublished final report into Russian meddling in UK politics, titled simply “Russia,” is at the centre of a political storm in the UK, where parliament was dissolved last Wednesday ahead of the general election now due in little more than four weeks time. The ISC committee chairman, Dominic Grieve, has already accused Boris Johnson of sitting on the report and claimed Downing Street had given “bogus” explanations for not publishing it and was scathing that the report may not now be published for months – as ISC reports can only be released when parliament is sitting and the committee is constituted.

Opposition politicians have accused the government of a cover-up, saying it could raise awkward questions about the validity of the Brexit referendum in 2016 and expose the alleged Russian connections of some in the Tory party. There are questions about how much money the Conservative party have accepted from individuals and organisations connected to the Kremlin.

The contents of the ISC report, the product of an extensive investigation, have remained tightly under wraps. But the CNN network has been provided with written testimony from two of the committee’s witnesses, and has been briefed on oral testimony given by two others, all of whom warned that Russia had established deep ties to the UK political scene and that not enough had been done about it.

From here, the story involves a couple of deeply shifty characters. One was Christopher Steele, the ex-British spy behind the Trump-Russia dossier, also mixed up in the Skripal affair  and another being Chris Donnelly, founder of the so-called ‘Institute for Statecraft.’

Leaving them aside – another witness was Bill Browder, founder and CEO of Hermitage Capital Management and a vocal critic of Russian President Vladimir Putin, as was Britain’s domestic and foreign intelligence agencies, MI5 and MI6, who also fed into the committee’s inquiry.

The report said that successive British governments had downplayed the threat with one witness pointing out that – “political considerations seemed to outweigh national security interests.” Witnesses also told the committee that Russian agents were targeting research roles in the House of Commons, acquiring British citizenship to funnel cash to political parties and employing public relations firms to cleanse reputations.

It is hardly much of a surprise that facilitators of money laundering make an appearance. Browder gave the committee a list of offshore-based UK citizens who, he alleged, had acted on behalf of thousands of shell companies used to launder Russian cash linked to an organized crime network.

The CNN report says – “Browder alleges that Putin had used the proceeds of illegal asset seizures and money from corrupt sources to develop a “network” of well-connected, influential British figures, enabling the Kremlin “to infiltrate UK society and to conceal the underlying Russian controllers and their agendas.” Unless tackled, such a network “will have serious detrimental effects on the UK democratic process, rule of law and integrity of the financial systems,” he warned. In the statement, he went on to say that “the Russian state effectively uses the Western persons… taking advantage of their identities, skills, expertise and contacts in the West to infiltrate Western societies,” to amass intelligence which is then used for the Kremlin’s propaganda purposes.”

Browder does have a reason to testify as he describes himself as “Putin’s No. 1 foreign enemy.” He was once a supporter of the Russian president and the largest foreign investor in the country’s stock market. In 2005, five years after Putin was first elected president, Browder fled to London after being deemed a threat to Russian national security. He says his expulsion was due to his outspoken criticism of Russia’s corporate governance.

The CNN report goes on to say that – “In his written testimony to the ISC, Browder accuses well-connected figures of involvement in an effort to help Russians who wanted to avoid being targeted by European Union sanctions. According to Browder’s testimony, among those involved was Peter Goldsmith, who was attorney general in the Labour government of Tony Blair, and his firm Debevoise & Plimpton. That firm hired CTF Corporate and Financial Communications (CTFCFC), a public affairs outfit co-founded by Lynton Crosby, a polling expert who has worked on Conservative party election campaigns.”

There is no suggestion that Crosby personally worked on or was aware of the work on EU sanctions carried out by CTFCFC until it was revealed in media reports. “Lynton Crosby was working exclusively on the 2015 general election campaign for the Conservative party at this time, and had no client involvement, outside of the Conservative party,” according to a statement provided by the Atkins Thomson law firm. “He was not aware of this research project by CTFCFC for Debevoise until reference first appeared in the media nor has he ever met or worked with Lord Goldsmith or Debevoise.”

Journalist and Russia expert Edward Lucas, who was among the first to contribute to the ISC inquiry in July 2018, told CNN his testimony to the committee centred on the role of lobbyists who were advocating in the UK on behalf of Russian clients with dubious sources of wealth.

In his two-hour, 45-minute oral testimony alongside Chris Donnelly, founder of the Institute for Statecraft, a UK-based non-profit that has in the past received UK government funding, Lucas said British authorities should increase their cooperation with other countries to tackle Russian subversion.

Other witnesses warned that Moscow was emboldened by British governments’ failures to take a tougher stance after a former Russian spy, Alexander Litvinenko, was fatally poisoned with a rare radioactive isotope in London in November 2006.

In March 2018, an ex-Russian spy Sergei Skripal and his daughter Yulia were the targets of a nerve agent attack in Salisbury, England that left one British citizen dead and prompted the UK and other countries to expel dozens of Russian diplomats – the largest in history.

The CNN report quotes one witness to the ISC inquiry who pointed out in evidence that Russia had successfully used on British soil both a chemical weapon (the Skirpal case) and radioactive material (Litvinenko), an achievement unmatched by any terrorist organization. “We are now in an accelerating downward spiral that needs to be checked,” that person’s testimony reads.

In Parliament on Tuesday, a government minister said Britain had taken firm action to counter the Russian threat. “The government are prepared to be robust and transparent with respect to Russia — look at the way we carefully collated, assessed, scrutinized and presented the evidence of the Kremlin’s involvement in the attacks in Salisbury and Amesbury, and at the way we built an international alliance that responded to that threat.”

The government’s decision not to publish the ISC report has given the UK government’s critics plenty of ammunition – with many high profile politicians and commentators asking what has the government got to hide.

In the meantime, Dominic Cummings has had questions to answer about a period he spent in Russia in the 1990s and Munira Mirza, Director of the Number 10 Policy Unit, and writer of Boris Johnson election manifesto was revealed to be a past member of the Revolutionary Communist Party, a small Trotskyist group that was dissolved in 1997.

The best the government could do in response was to accuse those asking questions of the report – to stop “promoting smears and conspiracy theories.”

In addition to refusing to publish the Russia report – Downing Street and the Conservative party have both declined to comment when asked to provide a statement from Cummings or respond to the CNN report.