The controversial connections of Johnson’s strategist and manifesto writer 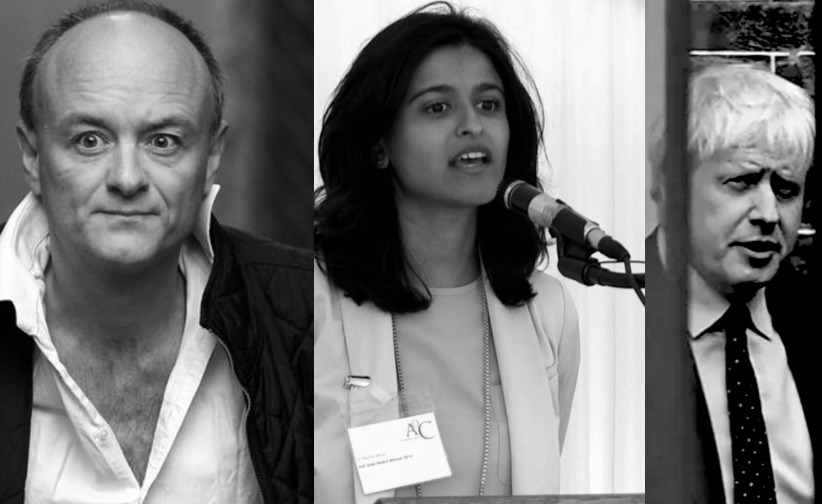 By TruePublica: Boris Johnson court’s controversy. It’s in his DNA to attract attention by making outrageous claims, venomous allegations, false assertions and more widely simply distorting the truth to benefit his own ends. What is more peculiar is his penchant for engaging figures from the political fringes to formulate his strategy of campaigning and what to do if he wins real power.

Dominic Cummings is Boris Johnson’s political strategist and most senior advisor. He was the campaign director of Vote Leave – the organisation mired in investigations for its actions involving Cambridge Analytica, Facebook and AIQ in what many regard as the rigging of the EU referendum by using military perfected systems designed to change national ‘hearts and minds.’ Much of the techniques and money used for this campaign has been questioned for its legality and investigations continue.

We all know that Cummings is an ardent supporter of chaos theory to enact what he thinks is real change. He believes from the rubble you can control the change you want and stated that institutions like Britain’s civil service, the European Union and United Nations should all be dismantled. The chaos unleashed upon the world with that vision coming true would prove truly disastrous. For instance, the breakdown of the UN would have catastrophic implications for millions around the world as it provides food assistance to over 90 million people and supplies 45% of the world’s vaccines to save 3 million children each and every year. Why anyone in control of their faculties would want to destroy a global institution designed around achieving global peace and security is beyond me. Why a UK Prime Minister would employ such a person to control his own strategy and election campaign after being mired in accusations of illegal funding and misuse of private data only goes to show how desperate the current government really is.

He believes from the rubble you can control the change you want and stated that institutions like Britain’s civil service, the European Union and United Nations should all be dismantled.

Right now, the police, Electoral Commission and Information Commissioner have cases going against the very organisation that was fronted by Johnson, Cummings and Gove and its activities involving Brexit. In normal times, these three would have not just been thrown out of office but the party as well. Sadly, these aren’t normal times.

Just as Johnson is accused of a ‘cover-up’ over Kremlin interference, major new Russian donations to the Conservatives are revealed, despite previous Tory pledges to distance themselves from Russian money.  And Cummings is facing questions over his past activities in Russia after a whistleblower came forward to raise “serious concerns” about the three years Cummings spent there after graduating from university. Even his background is one that would surely have made the security services gulp. After university, Cummings moved to post-Soviet Russia from 1994 to 1997, working on various projects. In one Russian venture, he worked on a project that even fell foul of the KGB. Russia is a declared hostile state of Britain. Not long ago, two dozen spies were thrown out of the country – and Boris Johnson appears to have taken money from this hostile state.

The story of Dominic Cummings, raising campaign funds and how those funds are used will no doubt be hitting the headlines over the next few weeks and months.

In the meantime, Boris Johnson has made another strange appointment – that of his policy writer who wrote the manifesto for the upcoming general election this December.

Munira Mirza is Director of the Number 10 Policy Unit, a post she was appointed to by incoming Prime Minister on 24 July 2019. She previously worked under Johnson as Deputy Mayor for Education and Culture when he was Mayor of London.

All good so far, that is until you realise that Mirza was a member of the Revolutionary Communist Party, a small Trotskyist group that dissolved in 1997. She contributed to its magazine, Living Marxism, which was dissolved after losing a libel case to ITN over the Bosnian Genocide. The magazine was replaced by Spiked for which she has written articles. Spiked is part-funded by an extreme free-market right-wing American outfit called the Charles Koch Foundation which has been largely attributed with corrupting American politics for decades. The Koch business has continually attracted controversy and been accused of stunning business malfeasance. More recently, their involvement in distributing ‘dark money’ has come to light – and is again, linked to Brexit.

Spiked is, as you can imagine, a climate science denier, an active mouthpiece for Brexit – and has a number of its activists involved in Nigel Farage’s Brexit Party as candidates or publicists.

Many of Mirza’s Revolutionary Communist Party colleagues became influential in Conservative Party Eurosceptic circles after the dissolution of their party, while remaining closely associated with each other’s endeavours. And it’s not that any of that is illegal, it’s just knowing where our politics is emanating from that is disturbing.

Many of Mirza’s Revolutionary Communist Party colleagues became influential in Conservative Party Eurosceptic circles after the dissolution of their party, while remaining closely associated with each other’s endeavours.

So there you have it. Two of the most influential people in government – the campaign manager and the policy writer mingle in very controversial circles. Both linked to extreme political environments and views and both involved in organisations that use dark money to voice their opinions to get their way. These are the team choices of Britain’s Prime Minister right now – and it says something quite something about Boris Johnson himself does it not?