Brexit: En-Route to Extremism and Violence 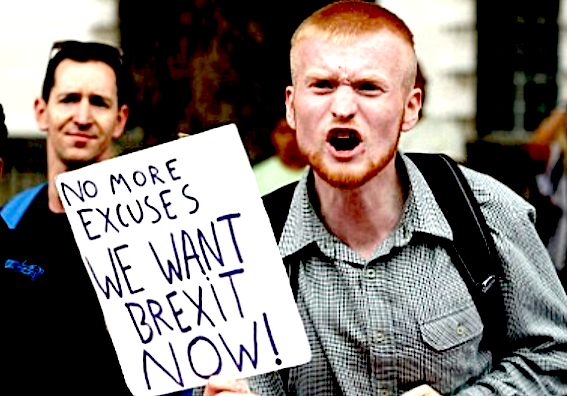 In a report out yesterday, “Brexit Poll – Have They All Gone Mad” we showed how one-third of the adult population of Britain would now put up with anything to leave the EU. And when I say anything, I mean literally that. This included forcing Northern Ireland out of the union and forced to join Southern Ireland within the EU.

The head of the Police Service of Northern Ireland (PSNI) told a committee in the House of Commons that the new IRA have already themselves declared Brexit was an “opportunity” to kick-start the nationalist cause in Ireland and was demanding hundreds more officers to help quash the expected violence. Could the result of that be acts of terror including a bombing campaign to match the horrors of the IRA campaign in the 1970s, 80s and 90s?

Indeed, this same one-third would find the complete break-up of the union of Britain acceptable as well. Scotland, Ireland and or Wales.

Already, as a direct result of Brexit, we have many more racially motivated attacks in Britain. Speaking at the end of her mission to the UK, Prof Tendayi Achiume, UN special rapporteur on racism specifically highlighted the Brexit-related growth in “explicit racial, ethnic and religious intolerance”, including extreme views that have gained ground in mainstream political parties of the left and the right.

Nearly two-thirds of the electorate is so fed-up with Brexit, they don’t care what happens as long as ‘we get on with it’.

In the meantime, public opinion has also shifted against Brexit. We are now heading into dangerous waters filled with predators who were once beneath the surface now being given air.

Change of sentiment – Change of atmosphere

The 632 seats in England, Scotland and Wales that make up Britain’s parliament were examined for an extensive study. It found that 112 had switched from Leave to Remain. The new analysis suggests there are now 341 seats with majority Remain support, up from 229 seats at the referendum.

One seat has switched support in Scotland and 97 have switched in England, while 14 of the 40 seats in Wales have changed from Leave to Remain. Overall, the model puts Remain on 53% support, with 47% backing Leave.

Data scientists compiling the study used a technique known as multi-level regression and post-stratification, similar to that used by YouGov in its pre-election model, which proved far more accurate than conventional opinion polls.

Among the constituencies to switch from Leave to Remain is that of Boris Johnson, the former foreign secretary and face of the Leave campaign. Support for Remain in his Uxbridge and South Ruislip constituency has risen from 43.6% to 51.4%, according to the new model.

Surrey Heath, the constituency of the other Leave figurehead, Michael Gove, also emerged as having a pro-Remain majority. Support for Remain increased from 48% in 2016 to 50.2%. There was also a 12.8-point swing to Remain in shadow chancellor John McDonnell’s seat of Hayes and Harlington.

The point being made here is this.  If one-third of the population, who are willing to go to any lengths to get Brexit no matter what the consequences – what will they do if the electorate want to change their minds and vote to stay. The change of sentiment will give fresh air to a much more toxic and extreme political atmosphere on both sides of the debate.

Extensive polling has continually confirmed that around 70 per cent of over-65s would accept a big economic hit – and half are willing for family members to lose their jobs. The social divide between young and old is not hard to fathom.

However, in just two years time, Britain, as far as Brexit is concerned will have a slightly different demographic to the one put forward in 2016. There will be 2.5 million fresh-faced, over-18-year-olds, who will be mostly remainers but 1.5 million over 65s, mostly Brexiters, freshly in their graves.

In 2016, 17.4 million voters went for Brexit, 16.1 million went for Remain. You can see the maths working against the original referendum result over time. In 10 years time, that swing in numbers, assuming no change in political sentiment, will be huge. Don’t forget, that swing has apparently already happened though.

If ‘Brexit means Brexit’ but Theresa May gets her ‘Brexit in name only’ plan through (or some variation of it) democracy will have been seen to have failed. If sentiment towards Brexit changes and the country proceeds with Brexit, no matter how hard or soft – so have the principles of representative politics in Britain. No matter who wins, about half the population loses. In other words, Brexit is about as divisive and toxic as it gets and will be for years to come.

There are many that now believe the far-left and far-right in the Brexit debate will only get worse, not just now but a long way into the future.

Dr Paul Stocker is a historian and a research associate at Teesside University’s Centre for Fascist, Anti-Fascist and Post-Fascist Studies says:

“The descent of Britain’s political culture from one which learned the lessons of the past and was militant towards the consequences of nationalism has been a rapid one. Worryingly, it shows no sign of slowing down as Britain hurtles out of the European Union and into the unknown.”

Extremist views on both the left and right are rapidly rising and are now infecting mainstream politics in Britain – this is Britain’s new norm whether we like it not.

A prominent British politician addressing a far-right or militant left rally or making Islamophobic or racist comments just three years ago would have been an act of political suicide. Not today it seems.

We should not forget that NI’s terrible legacy is rippling on the surface once again. The power-sharing government that the NI agreement created is currently suspended and Brexit threatens to tear apart a key thread that binds the deal — the invisible border facilitated by the U.K. and Ireland’s membership of the European Union. One-third of the entire adult population agree that handing Northern Ireland to Southern Ireland would be acceptable – to England.

The ‘troubles’ in Northern Ireland that spilled over into mainland Britain was an ethno-nationist conflict fuelled by historical events. Guerilla warfare lasted for three decades. More than 3,600 people were killed in the conflict, of whom 52% were civilians, 32% were members of the British security forces, and 16% were members of paramilitary groups. Tens of thousands were injured.

A key issue was the constitutional status of Northern Ireland. It wasn’t really a religious conflict, although often sold as one. The population of NI is less than 2 million. An estimated 30,000 went to prison for paramilitary offences for they believed in.

Does the NI conflict, as an example of a home-grown constitutional crisis not provide us with the possibilities of just how bad things could get in the years ahead? And what other acts by a civilian uprising could we see?

Think about that for a moment. Today, citizens of England are now in agreement that a low-level civil war and the breakup of the union is a price worth paying for fully leaving the EU, which may not happen and even if it does, may not happen to their liking. One wonders where this English uprising is eventually going to end up.

Either way, it won’t be pretty.