Brexit: How deeply the UK’s food security is dependent on the EU 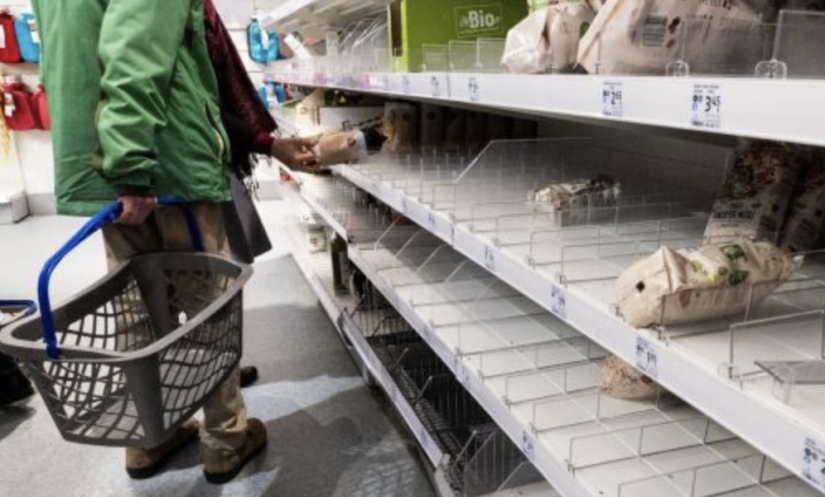 By Tony Heron: In 2008, the sight of Northern Rock customers queuing to withdraw their savings from the stricken High Street bank became one of the first and – most enduring – images of the global financial crisis. Today, in the midst of the COVID-19 pandemic, the analogous imagery is provided not by banks but supermarkets with incidents of panic buying and hoarding by consumers worried about impending food shortages. Yet unlike in 2008 with the banks, the food retail sector has shown itself to be surprisingly resilient in the face of the COVID-19 shock with supermarkets shelves, for the most part, remaining well-stocked.

The resilience shown by the UK food system in face of COVID-19 is both testament to the efficiency of global supply chains and a timely reminder of our dependence on the EU. Approximately 29% of the food consumed in the UK comes from the EU27 compared to just 4% each from the regions of Asia, Africa and the Americas. The UK’s reliance on the EU is especially acute in the horticulture sector, with approximately 40% of vegetables and 37% of fruit sold in the UK imported from the EU countries.

Parallels are often drawn between Brexit and two other seismic episodes in British political history: the repeal of the Corn Laws (1846) and the Tariff Reform debate (1903-6). Like Brexit, these prior episodes are noted for the ways in which they divided the ruling Conservative Party between its nationalist-protectionist and metropolitan-liberal wings, ultimately leading to a formal rupture of the party in the first case and landslide electoral defeat in the second. These historical comparisons are also relevant for the ways in which each episode involved the politicisation of food. In an election poster from 1905, for instance, the strapline read: ‘we plead for the women and children, which will you have? Free trade or protection?’ The two choices were represented in the poster as two loaves of bread, a large ‘free trade’ loaf and a considerably smaller ‘protection’ loaf. In other words, the humble loaf was designed to cut through the technical details of trade and comparative advantage to appeal directly to working-class voters as ‘citizen-consumers’.

In the present setting, the idea of a ‘Brexit dividend’ in the form of cheap food has been a constant theme of the pro-leave prospectus. It is notable, however, that relatively few in government have been willing to make the case for ‘cheap food’ explicitly. The possible exception to this is Liam Fox during his time at the Department for International Trade (DIT), though his pronouncements were usually oblique and highly coded. For instance, when in government, Fox was fond of saying that ‘there will be no lowering of UK food standards’.

Outside of government, the case for cheap food has largely fallen to right-wing think tanks like the Legatum Institute. Other voices, such as Tim Wetherspoon, the maverick chairman of the Wetherspoons pub chain, MP Jacob Rees-Mogg and John Longworth, the former head of the British Chambers of Commerce and director of the Leave Means Leave lobby group, have reiterated the same message: that ‘Brexit means cheaper food’.

Although few of these voices have made the point explicit (though see Bottle et al. 2018), the implication of the ‘cheap food’ policy, if implemented, is that it would have hugely disruptive effects on British farming, which currently meet around half of the country’s food needs. As noted by Michael Gove while he was Environment Secretary, British farming is noted, not primarily for its international competitiveness but for its high standards and commitments to animal welfare. Pointedly, the speeches and pronouncements which Gove made during his tenure at DEFRA rarely, if ever, mentioned ‘cheap food’.

In a speech to the National Farmers Union (NFU) in November 2018, Gove spoke positively of increasing public scrutiny of the circumstances in which food is produced and the need to make healthy food choices. ‘This scrutiny’, Gove said, ‘only strengthens the hand of British farmers. A demand for higher standards, for more sustainable production, for high standards in animal welfare and more nutritious choices can only mean a demand for more high-quality British produce rather than the alternative’. Although Gove did not go on to elaborate on what the ‘alternative’ referred to precisely, we can infer he meant cheaper imported food, presumably produced to lower standards and with less concern for animal welfare or the environment.

What’s on the menu?

The government’s steadfast refusal to countenance an extension to the Brexit transition period, coupled with the relaunch of free trade talks with the US, is fueling speculation that Boris Johnson’s government is intent on radically transforming the UK’s model of political economy. Applying this logic to food and agriculture, Brexit provides an opportunity to leave the EU’s regulatory orbit, including the Common Agricultural Policy, so as to reclaim and re-design a UK food policy from scratch. Yet COVID-19 is a stark reminder of just how deeply the nation’s food security is dependent on the EU.

More significantly than this, Boris Johnson’s government seems reluctant to actually make the argument for the radical shake-up of the agricultural sector. Indeed, if anything, protecting the UK’s farmers seems to be hardening into something close to a negotiating ‘red line’ – to the obvious disappointment of some Brexiteers. Of course, a more tumultuous outcome cannot be ruled out, especially given the (quite high) prospects of a disorderly Brexit in which the UK’s relatively weak bargaining position vis-a-vis the US and other potential trade partners would be further exposed. But, for now, it is perhaps best to follow the old adage: never order the cheapest dish on the menu.

Tony Heron is Professor of International Political Economy, Department of Politics, University of York. This article was also published at the London School of Economics.