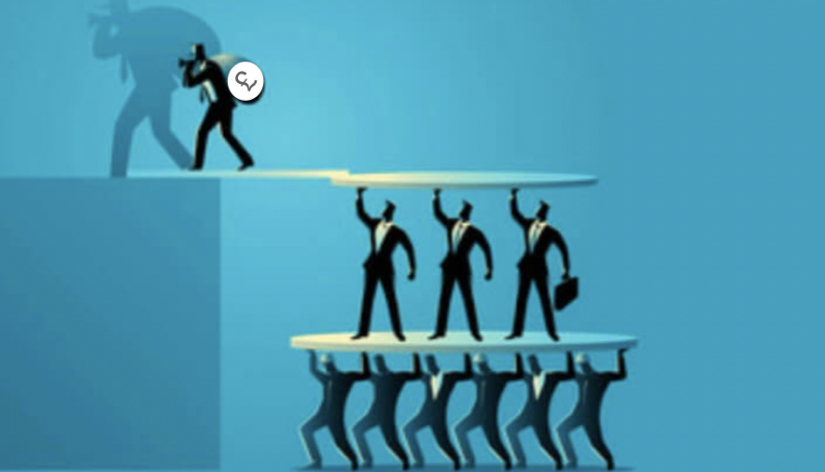 By Dr Nicholas Westcott. It is increasingly clear that Brexit has cost not saved money, encumbered not liberated trade, inhibited not enhanced our sovereignty, and threatens to break up the UK. In fact, argues Nick Westcott, it is nothing more than a political Ponzi scheme – and it is still going on.

Bernie Madoff died last month. The obituaries and there were many, reflected on his extraordinary ability to persuade people to join a pure Ponzi scheme, worth $64.8 billion when it collapsed.  But he simply exploited human nature: that people are happy to believe a lie, without asking too many questions, if it promises them what they want. This applies in politics too.

The essence of a Ponzi scheme is to offer impossibly attractive returns – 15 per cent a year in Madoff’s case – which keeps attracting new investors whose savings pay for the impossible returns to the initial investors. So it only works if it keeps growing. And that requires keeping people’s confidence, assuring them that everything is working as planned come good times or bad, and in all circumstances keeping up the pretence, sustaining the lie. It invariably – invariably– collapses when people start smelling a rat or, as with Madoff in 2008, need to cash in their savings and ask for their money back. Then the whole thing was revealed as ‘just one big lie’.  Many of Madoff’s investors lost every penny.

Brexit is a political Ponzi scheme, and it is still going strong. The crash in this case is a slow-motion one. But it is happening. In politics, it is almost easier. People are looking for reassurance as much as cash, so it is easier to sustain the lie. Of course, many people who voted for Brexit just wanted out, whatever the cost. They believed Brussels was interfering with our national way of life and wanted it over. For them, if they lost their money or their job, or if the Union broke up, it was all worth it.  But not for every Brexit voter.  There were some among the 52 per cent who believed the promises they were sold.

So do any of those promises hold water?

The first was that Brexit would save money: £350 million a week for the NHS said the big red bus.  True, the NHS is getting more money, but that is because of COVID, and it is borrowed from the future not recovered from the EU. The truth is that the costs of Brexit far outweigh the cash benefits. In 2016, the net annual cost to the UK of EU membership was £9.4 billion (£181m per week). From 2021, the UK will still make a net contribution to the EU for continuing liabilities of nearly £2.5 billion (€3 billion) p.a. and in 2018/19 alone the Chancellor set aside an extra £1.5 billion for Brexit costs, which only partially covered them. On top of this roughly £100 m per week, cash cost is the impact of the 4 per cent hit to GDP estimated by the Office for Budget Responsibility, which cuts government revenue as well as national income. Overall, there is now no question that Brexit costs, not saves, money.

The second promise is that it would free the economy, stimulate enterprise and make Britain more ‘nimble’ on the world stage. But far from liberating British business, it has tied it up in red tape. The essence of the EU’s Single Market was to cut costs and reduce bureaucracy for internal trade – and it succeeded.  Rules will always be needed to safeguard competition as well as people and protect consumers from environmental harm, bad food and dodgy products. It is cheaper and more efficient to do that with our neighbours than on our own. Now the costs and bureaucracy are back, especially for services, and the more we diverge, the heavier the costs will be.  It will be many years, if ever, before the benefits of other fabled free trade deals will match the losses on trade with the EU.

“My argument is not that Britain should rejoin. Brexit is a fact: it has happened. But we must accept that the associated facts have also happened. The money and the sovereignty have gone, for good”

Thirdly, there was a presumption that where England led, the other nations of the United Kingdom would dutifully follow, and that Brexit would not impact Northern Ireland. The Unionists were complicit in this, vetoing the only deal that would have both delivered Brexit and preserved the Good Friday Agreement with no major change for the province. The Prime Minister swore blind there would never be a border in the Irish Sea, and then agreed one.  True, he never promised the Scots anything at all, but his view of Scotland seems to have been set around the time of Culloden.

Finally, there is sovereignty. This has become the last refuge of the Brexiteers. Even if Brexit has cost money, increased bureaucracy and imperilled the Union, we have our sovereignty back. Really? As I have argued before, this is only true if you adopt a North Korean definition of sovereignty. If you judge it instead by the ability to defend our national interests and control our own destiny, we were far better able to do that within the EU than outside it.  Brexit has thrown away control, not taken it back. This, in some ways, was the biggest lie of all.

The Remain camp failed to persuade the public of the Ponzi scheme or puncture the hot air balloon of Brexit. ‘Project Fear’ just bounced off. As the balloon rises majestically into the sky, it is meeting the cold air of reality and the politicians are running out of hot air to keep it up. So we are coming back down to earth, quite fast. ‘It was worth the view’ some will say, or ‘we always knew it would take 10 years to work’, while others nurse their broken legs.

My argument is not that Britain should rejoin. Brexit is a fact: it has happened. But we must accept that the associated facts have also happened. The money and the sovereignty have gone, for good. The Ponzi scheme has popped. It is crucial for the country’s future that people understand the consequences of the choice and accept not only the fact of Brexit but the falseness of the premises on which it was sold.

Some may argue that this is nothing new: ‘all politicians lie’; it’s naïve to believe their promises; even, ‘we got what we wanted’.  And then we are in Trump-land, where people are willing to say ‘I’ll vote for you because I like what you are saying, whether it is true or not.’  But this undermines political life itself. It polarises political discourse because there is no longer a rational base on which to debate outcomes, and destroys the consent of the governed: ‘this is not my government, so I will not obey it’. And that is the beginning of the end of democracy.

Ponzi schemes are always costly. They just get more so if you refuse to admit they exist.

Dr Nicholas Westcott is a former diplomat and a Research Associate at the Centre for International Studies and Diplomacy, SOAS University of London.