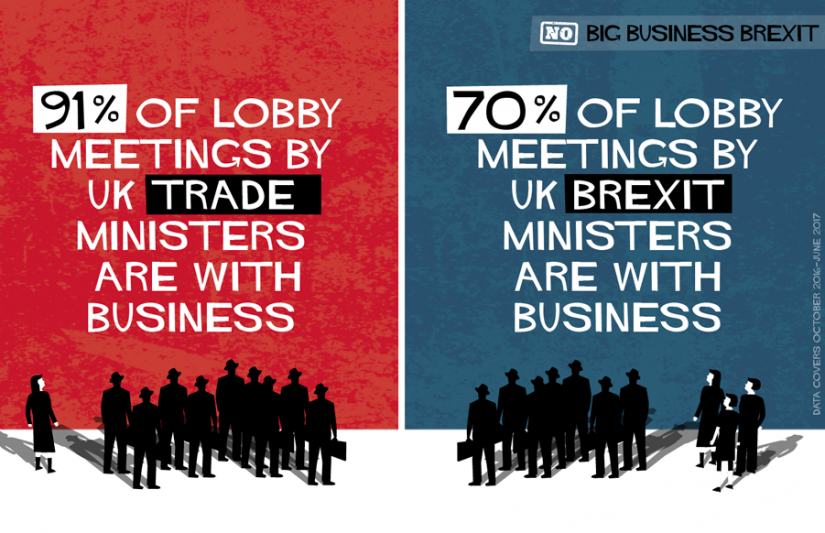 Updated analysis released by Corporate Europe Observatory and Global Justice Now exposes how official lobby meetings about Brexit and post-Brexit trade are being dominated by big corporate interests at the expense of civil society.

As EU leaders start to gather in Brussels to agree on opening talks regarding post-Brexit transition and trade, the figures shine a light on the risk of Brexit being shaped by the concerns of big business, rather than those of the population as a whole.

The analysis of official statistics on lobby meetings with ministers from the UK’s Department for Exiting the EU (DExEU) and the Department for International Trade (DIT) between October 2016 and June 2017 reveals a shared willingness to meet the representatives of big corporations above all others. The analysis shows:

The full list of meetings highlights just how rarely citizens and civil society have been heard by the negotiators, despite the fact that Brexit will directly affect the everyday lives of all UK residents.

A similar pattern emerges at the EU level, with 72%  of meetings of Chief Negotiator Michel Barnier and his taskforce held with corporate interest representatives, with the finance sector as well as the food / agriculture sector dominating.

The research also highlights the lack of lobby transparency around these meetings.  Decision makers refuse to release participant lists, agendas, minutes and other documents from lobby meetings, making it impossible to know who exactly is in the room and which specific policy options are being discussed.

Corporate Europe Observatory’s transparency campaigner Vicky Cann said:
“Brexit will strongly affect people’s private and professional lives in the UK, so it is vital that the process is as transparent as possible and that many different interests are consulted.
“But we observe a clear corporate dominance in the lobby meetings of the UK Brexit negotiators. And this pattern is replicated by EU negotiators as well. Civil society has had far less face-time with ministers and negotiators to voice  the public’s needs, concerns, and proposals around Brexit.”

Alex Scrivener, a campaigner at Global Justice Now, added:
“The corporate bias that has been exposed in this list of meetings shows that we are veering dangerously towards a ‘big business Brexit’ that ignores the wider needs of UK society. Unless there is some sense of transparency and accountability in this process, there is every chance that the UK government will use Brexit as an opportunity to do away with existing, albeit imperfect, protections relating to labour rights, consumer standards and the environment.”

“The fact that David Davis has found  time to meet business representatives 29 times since October 2016 but has not once met with citizens’ rights advocates for EU citizens in the UK and British people in Europe is shocking and shows that this government has its priorities totally wrong on Brexit.”