Brexit Poll – Have They All Gone Mad, Or About To? 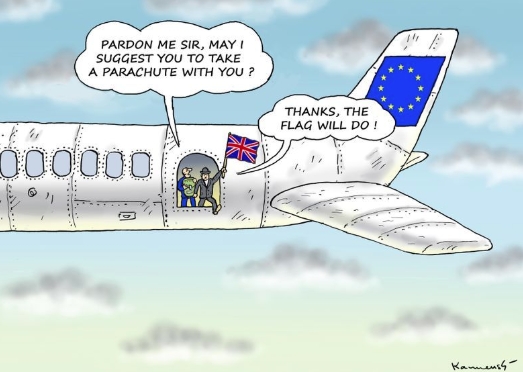 TruePublica Editor: Here’a statement you haven’t read yet about Brexit and when you do, read it again and just absorb its consequences.

“All the evidence points one way: the polling needs to be taken literally.  Something like a third of the population is so strongly motivated for Britain to leave the EU that any consequence up to and including the destruction of the United Kingdom and the outbreak of violence is acceptable.”

Political Betting is Britain’s best resource for betting on politics. It has some very interesting data and opinions and obviously looks to forecasting based around polling and betting odds.

That was a statement by professional pundit Alistair Meeks of Political Betting. He comes to this conclusion with a number of recent poll results.

YouGov recorded that 61% of Leave voters thought that significant damage to the British economy would be a price worth paying for bringing Britain out of the EU.

How far does this 61 per cent think leaving the EU is worth pursuing? A loss of employment is one thing, the loss of one’s home is another. Maybe, maybe not.

I remember back in the days when the ‘troubles’ as they call it with Northern Ireland was in full swing. In the 1970s there were over 40 incidents of terrorism on mainland Britain. Hundreds were killed, thousands injured – many injuries were life-changing. In the 1980s there were less than a dozen incidents but many soldiers and police were killed – an attempt was made to kill the Prime Minister. In the 1990s there were over 30 serious incidents. Truck bombs, car bombs, firebombs, vicious nail bombings, shootings, mortar attacks of Heathrow airport – an MP was assassinated and another attempt to kill the PM got close to becoming reality. Bombs went off at Camden High Street, central Manchester, Warrington, St Albans – it made no difference – the innocent were fair game. It was a very dark time and everyone who lived in cities lived with the terror it caused. I worked in London when the city was practically evacuated one day. We had a car half blown up with a colleague in it, who thankfully, walked away unscathed.

Although this scenario seems a distant one, have nearly two-thirds of Conservative Leavers taken leave of their senses? Do they really think that a return to bi-weekly assassinations of the British general public is a fair swap for leaving the EU? Have they not considered the detrimental effects that would have on all citizens, on the economy – living through such dark and dreadful times.

Some commentators tried to explain this away as an unwillingness among Leavers to be cowed by terrorism. Others even thought that by leaving the EU we could bring back the death penalty to execute the terrorists that were caught.

These commentators are dangerous mindless idiots to compare the extensive loss of life that the NI troubles brought us as a fair price for independence from the EU.

So, we have confirmation that nearly two-thirds of English Leavers would see the complete destruction of the United Kingdom in favour of leaving the EU. It turns out that one-third of Remainers think the same way just to prove that leaving the EU was the wrong decision. In the combined average, that is fully one-third of the adult population of Britain.

Hence, the statement at the beginning of this article:

“All the evidence points one way: the polling needs to be taken literally.Something like a third of the population is so strongly motivated for Britain to leave the EU that any consequence up to and including the destruction of the United Kingdom and the outbreak of violence is acceptable.”

So what else would be a price worth paying? The total privatisation of the NHS or schools or the police? The return of public executions maybe?

Has the propaganda campaign to see Brexit become a reality become so successful as a brain-washing programme that massive civil unrest, the breakdown of civil society and the breakup of the union is perfectly acceptable? Does one have to ask the question – just how far would these people really go? And are they a threat to the wider society if things don’t go their way?

Alistair Meeks says: “You have to pity the politicians that must bargain with such a large feral segment of society (or you would if they had not played such a large part in creating it).  Some earnest commentators will tell us that the concerns of these voters must be listened to and addressed.  But voters, even a fairly large section of voters, do not automatically possess oracular wisdom.  We need to bear in mind the possibility that they have been driven doolally.  The evidence is pointing strongly that way.”

And we can see those stoking up this sentiment are now hanging around in dark corners looking for a break. Meeks says: “Nigel Farage is already sniffing around trying to work out how he can make himself relevant again.  If the Conservative party looks as though it has failed to deliver Brexit in the minds of these diehards, he stands a very good chance of doing just that.”

Then there’s the bigot in chief – Steve Bannon who is coaching another unstable political figure – Boris Johnson.

If there is a leadership contest for the top job at No10 and the likelihood of that sometime in 2019 is really quite high -Political Betting opines that: “the winner will probably be someone who can present themselves as a hardline uncompromising Leaver, regardless of their other qualities.  Boris Johnson is now manifestly unfit for the top job.  He might yet get it.”

All of this, in turn, will shore up the opposition to Brexit.  Remember, polls are now showing a clear lead for Remain over any individual form of Brexit.  With the government seeming to be in the grip of ideologically-driven obsessives, the unconverted are going to be casting around for the most effective way of opposing them.  Right now, for all its defects, that looks likely to be Jeremy Corbyn’s Labour party.

It appears as Meeks says that a third of the population want to burn the house down and right now no one is manning a hose.

In the meantime, Theresa May’s plan of a ‘BINO’ or Brexit in name only is designed to honour the referendum result while causing as little damage as possible to the economy. If she drags this out long enough, there’s a strong chance the electorate will go with whatever plan just ends all the pain because they now just want it all over and done with.

But watch out, because if Brexit isn’t a hard Brexit, your high street could become a battleground for the new disaffected one third. 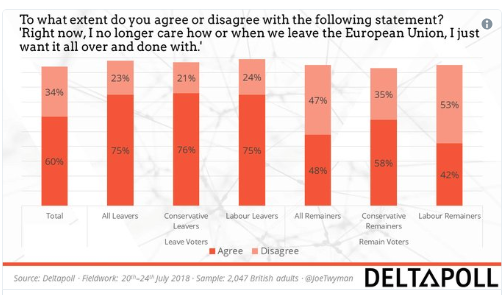