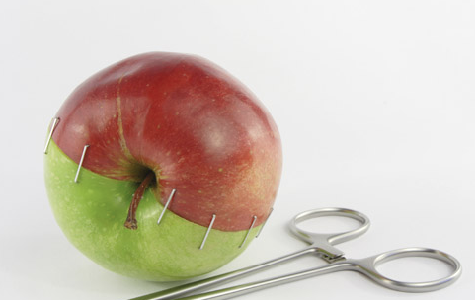 By Colin Todhunter – On the back of Brexit, the UK government is planning what could be a disastrous trade deal with the Trump administration. It would likely be worse than the secretive and undemocratic stalled Transatlantic Trade and Investment Partnership (TTIP) deal that the EU has been planning with the US. As for food and agriculture, such a trade deal would be contingent on the UK abandoning standards that took years to put in place, allowing imports of US foods that were previously rejected: beef from cattle implanted with growth hormones, chlorine-washed chicken and unlabelled genetically modified (GM) foods.

It is not surprising, therefore, that Monsanto is preparing a fresh effort to try to soften up the UK public for GM food appearing on supermarket shelves and GM crops being planted in the nation’s fields. Former World Bank communications strategist and slick communicator Vance Crowe has been hired by Monsanto as its ‘Director of Millenial Engagement’ to convince younger people about the benefits of GM. And he is visiting the UK to give a series of talks.

Although Crowe will do his best, no amount of corporate spin can hide the reality: the UK public does not want GM; there is no scientific consensus on the health safety aspects of GM; there is more than sufficient information to indicate serious health dangers (for example, see this); and there are well-documented adverse environmental impacts derived from what is an over-hyped (and largely unneeded) technology. In fact, the failed GM project has to date left a trail of broken promises in its wake that are clear for all to see: no decrease in pesticide use and no increase in crop yields.

One thing in the technology’s favour, however: at least from an industry standpoint, GM allows corporations like Monsanto tosecure intellectual property rights on seeds and to secure farmer dependency on proprietary inputs. In this respect, maybe the public aren’t as ignorant about the GM issue as Monsanto would like us all to think: in a recent survey in Canada, over 50% of the public who were questioned believed GM was just a way for companies to increase their profits.

Crowe is promoting a food and agriculture model based not only on a disastrously failing taxpayer-subsidised chemical treadmill but on a failing biotech treadmill too. Good for the agritech/agribusiness cartel, bad for farmers, bad the environment and bad for consumers.

But Crowe reads from a script that will try to convince everyone that the opposite is true: Monsanto is providing a service to humanity and that his company is a hapless victim of hate-filled ideologues. He is on record as saying that that critics of modern agriculture have “spread anger and fear into the system” and that:

“what we as an industry can do is to package ideas so that people can understand them and spread our ideas throughout networks making sure that what we believe spreads out to be what culture stacks up to.”

Part of the ‘cultural stack-up’ involves an attempt to depict critics of modern agriculture and GMOs as anti-science and fear-mongers who deal in ideology and emotion. These claims have been used by various pro-GM ideologues, such as Kevin Folta, Owen Paterson, Richard John Roberts and Shanthu Shantharam time and again. And these claims have been debunked time and again (see this, this and this).

The industry tactic is that if the same baseless claims are repeated as nauseam, the public and policy makers will take them at face value. The aim is to reduce the debate to a series of trivial soundbites. This manipulation is carried out by individuals with an interest in promoting a GMO techno quick-fix for world hunger and whose own self-interest compels them to side-line the social, environmental and economic impacts of this technology and the root causes of poverty, malnutrition, inequality and hunger.

Slogans and PR stunts are designed to bring the debate down to smears and emotional blackmail to sway public opinion in favour of GMOs. They are designed to denigrate critics and marginalise debate about realistic alternatives for feeding the world, which challenge the interests of the global GMO agritech sector.

The pro-GMO lobby has used such tactics as part of a well-funded, carefully thought-out strategy for dealing with critics. It has favoured public relations, deception and the co-option of public institutions over actual science.

The GMO-agritech sector has taken its cue from big tobacco, big oil and right-wing ‘free’ market fundamentalists whose only concern is to maximise profit, do away with regulations and health and safety standards and deceive the public and politicians that harmful products and practices are in the public interest. For instance, front groups like the Science Media Centre and Sense About Science have done their best to hijack the concept of ‘sound science’ and twist it in favour of industry propaganda which is based on anything but science that is ‘sound’.

Vance Crowe aside, we should also take note of other key figures who are currently jumping on the pro-GMO bandwagon and who are trying to shape the debate.

In the EU agricultural sector, he says:

“… opposition is especially prominent in the debates over GM crops and foods and, sometimes, on issues such as pesticides. On GM in particular, the EU has been unable to make progress despite clear scientific advice.”

Packer argues that the EU debate on GM foods was for a considerable period hijacked by “anti-scientific forces”:

“If, as many believe, GM has a significant role to play in meeting future food supply sustainability, it would be sensible to make rapid progress on the matter, for the benefit of future generations…. As in the EU, there are also groups in the UK opposed to GM as a matter of principle who would not therefore be persuadable as to its benefits. But it is to be hoped the scientific view would prevail and there would be an opportunity to ensure it did.”

He adds that after Brexit there will be scope for ‘improvement’ in the present arrangements:

“Post-Brexit there will also be scope for adopting a more rigorous scientific attitude on matters such as pesticides and biotechnology including GM. We cannot afford the luxury of ignoring scientific advance because Luddites shout louder than the rest of us. But the basic system suits us quite well.”

It is interesting to note that his piece was originally published on the website of the pro-privatisation, pro-deregulation right-wing  Centre for Policy Studies lobby group. His views are based on little more than standard industry-type public relations. There is the usual hint of emotional blackmail that suggests future generations will lose out on the perceived benefits of GM thanks to a bunch of anti-science ideologues (future generations that will no doubt also lose out on the ‘benefits’ of more health-destroying pesticides from an agrochemicals industry in dire need of more deregulation). Of course, the tiresome Luddite smear is thrown in for good measure.

Isn’t it about time that people in Parker’s position stood up and held the likes of Monsanto and its claims to account instead of acting as cheerleaders? By buying into industry PR and attacks on critics, does Parker think he comes across as credible and objective?

Despite the spin and deception, the public is not as gullible or misinformed about the GM issue as the likes of Parker or Crowe would like to think.

Colin Todhunter is an independent writer and former social policy researcher. His work has been extensively published both online and in the print media. Although he writes on a wide range of issues, his main area of concern involves how large corporations, especially transnational agribusiness, have captured key international and national institutions to undermine indigenous models of agriculture.