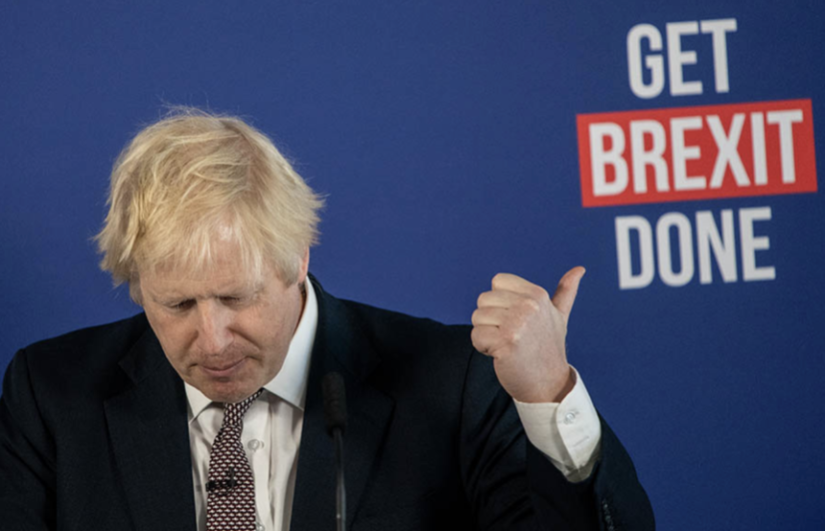 TruePublica Editor: The word on the ground in political circles is that Boris Johnson is facing political armageddon. The battleground of Brexit and Covid has left Johnson with his back in a corner. With a no-deal Brexit and a Joe Biden win, Britain will be the only major economy in the world with no trade agreement with any of the super-powers. Along with Johnson’s disastrous handling of Covid as we head straight into the winter flue season – Johnson cannot afford a crash-out Brexit. If that happens – both he and the Tories are finished, the Union will fracture, and the economy will take years to recover. Despite all the rhetoric, the threats, the red-lines – a deal with the EU is not just still possible – it’s the only chance Johnson has to leave a legacy of anything positive. Today, October 15th – is Johnson’s last, last red-line. Once again, he’ll back down – a soft Brexit is a more likely outcome than anything.

Between metaphors about tunnels and submarine and the contradictory statements by UK ministers and the absence of any serious Commons debate on Brexit, it is hard to say with certainty what will happen in the EU-UK talks especially as no-one knows when they will end. But here are ten points which suggest a deal is growing more likely in contrast to mid-year when the Brexit commentariat in the UK, when journalists, think-tankers, academics and many EU specialists were very pessimistic and predicting a No Deal or WTO crash out. Here are ten reasons why such a dire outcome may yet be avoided. writes Denis MacShane.

1) The UK’s Brexit negotiator, Lord David Frost has been instructed to say the UK will honour its European Convention/Court of Justice Human Rights obligations, which Foreign Secretary Dominic Raab, in particular, wanted the UK to withdrawal from. There is Tory support for leaving the ECHR, but the EU says if that remains HMG policy, there is no question of an agreement on data exchange. UK police, counter-terrorism, and intelligence agencies have warned publicly that losing access to EU data on border crossings, and criminal DNA records, would severely damage UK anti-terror and crime-fighting capabilities. Johnson has now done a U-turn and told Frost to accept EU demands to abide by ECHR conventions and rulings.

2) A deal on state aid is now likely. We spend 1/5th of maximum state aid possible, under existing EU rules, so the UK could increase state aid to £61bn and still be within EU rules. In effect, COVID has torn up orthodox EU fiscal policy as all governments are going to be borrowing and spending very generously over the next decade, or so, to rebuild the economy.

3) On fishing: some “live and let fish” compromise is necessary before Britain launches an unwinnable war with the continent. The Common Fisheries Policy (CFP) is no longer the racket it was when Britain joined the EEC in 1972. It is now mainly about conserving fish stocks, which are as important to British fishing skippers, as to their continental comrades. The British proposal for a three-year continuation of the existing status quo is already a move away from previous demands that all non-UK fishing boats are expelled from UK waters. Lengthen that with a review clause and a guarantee that anything landed in the UK will have automatic tariff and quota-free access to European markets, and we might get somewhere. There is room for sensible compromise though President Macron needs something in return. There are twice the number of French working in fishing boats than in the UK (where 30 % of onboard trawler workers are EU citizens, as are 90% of workers preparing landed fish). A long lead-in transition could sweeten the bitter pill for the French.

4) There is a real panic amongst road hauliers that there will be major blockages in Kent, where 10,000 lorries arrive every day bringing 85 % of fresh fruit and veg and 60 % of all bacon, sausages and ham we eat. The other strong pro-Brexit man in the government, Michael Gove, has publicly talked of queues of 7,000 lorries. Very few of the estimated 50-60,000 customs agents needed to fill in forms have been hired. I went to speak at a protest meeting of a giant site for a major lorry park on edge of Ashford to take up to 5,000 lorries with testosterone-charged drivers hanging around waiting to clear customs – this is not popular in the Tory shires.

5) In two recent news items, Bloomberg reported that 25% of all investment funds in City have relocated to the EU. JP Morgan has moved 200 staff to Germany to become Germany’s 6th biggest bank. The loss to the British tax revenue of these high-paid jobs, going to EU capitals, is substantial. Secondly, Nissan and Toyota said they would expect compensation from HMG if tariffs were imposed – implying these were promised by May. Again this is a very big cost to the taxpayer. The young, non-ideological, Chancellor Rishi Sunakand his Treasury team must be tearing out hair on what Brexit is costing on top of COVID. Business and economic actors have lost all enthusiasm for Brexit. They just see long difficult years ahead of form-filling, not being able to travel freely to do business in EU capitals, difficulty in recruiting needed staff at both low pay and specialised skill ends of the labour market.

6) Michael Gove, the only cabinet member with an independent brain and voice, has briefed that he is worried that a crash-out Brexit would further strengthen the nationalist vote in Scotland giving the Johnson-hating SNP a big majority in the Holyrood elections in May 2021. Nicola Sturgeon would then have a mandate to insist on a second referendum on independence. Polls in Scotland now show a majority for independence and breaking away from English rule. Does Johnson want to be a PM who has to tell Her Majesty, 95 next year, she is no longer Queen of a United Kingdom?

7) A new poll shows that 50 of Brits now think Brexit was a wrong decision, and only 39% think it was a good one. This is not about rejoining, or re-voting,  but the enthusiasm for breaking links with Europe is evaporating. Cabinet ministers too are toning down anti-EU rhetoric. Even the old die-hards like John Redwood, Norman Lamont, David Davis, or Steve Baker are relatively silent. They have won the fight to leave the EU Treaty, but most serious Tory MPs know we need a friendly, open-for-business relationship with the EU, which has stayed almost utterly united despite many predictions in London by monolingual English commentators that political leaders like Angela Merkel would instruct Michel Barnier to roll over for Johnson.

The public political condemnation of the Internal Market Act which openly states the UK will break international law and treaty obligations has sparked the biggest wave of anti-UK declarations from EU ministers, ambassadors, EU Commission president Von Der Leyen, and key MEPs ever seen against the UK government since 2016. But the European Court of Justice has now seized the new Act and the chances of it being ever fully operational are slim. Johnson’s Steve Bannon – the chief anti-European ideologue Dominic Cumming – is fighting a rear-guard action to allow trade deals to be concluded on the basis of lowering food standards in the UK. This is not popular with middle-class Tory voters who are frightened of “Frankenstein” food produced with chemical, or hormone additives as in America. The Agriculture Minister has pledged that UK food standards will not be lowered, nor will consumer safety be compromised to secure trade deals. This is not yet a headline story, but the UK farming community which delivers Tory majorities in rural constituencies is very alarmed and can mobilise every aggressively. Johnson is aware of this.

8) If the broadly pro-EU Joe Biden wins in US presidential election that will increase pressure on Johnson for a deal. Trump praised Johnson on his return to the White House, after falling ill with COVID. Praise from Donald Trump is not popular in the UK. 2016 saw the birth of the Brexit/Johnson-Trump Siamese twin sired by nationalist, populist, and anti-immigrant prejudices. If the Trump half is sawn off by US voters, the leftover Brexit/Johnson half will be much weaker.

9) Johnson has been much enfeebled by his confused, contradictory handling of COVID. He is openly attacked by Tory MPs representing small businesses, especially town centre and non-industrial SMEs who cannot survive with early closures, limits on people gathering, and other measures, which are imposed by central government diktat with no debate in the Commons. The UK MP is elected not on a list system, but as the representative of his or her community’s economic interests. The public and Tory MPs sense no grip or control from the Prime Minister. If some mechanism could be found to put off the worst impact of Brexit they would reluctantly accept that.

10) The Labour Opposition, under Sir Keir Starmer, refuses to engage in any Brexit debate but simply calls on the PM to deliver a “good deal for Britain that protects the environment, animal rights, and worker rights”. But other than that Labour says it is all in the hands of the prime minister. Johnson and Tory MPs can see the trap being set. A crash out a NopDeal/WTO Brexit with queues, shortages, maybe rationing, and endless uncertainty is a disastrous beginning to his second full year in office and will encourage the growing Tory press voices saying he cannot win the next general election.

There is no win for Johnson in going for a hard Brexit. How he U-turns remains to be seen. But he is the artist of the political pirouette and has never been faithful to a policy, or belief other than his own advancement in three decades of political activism. The majority of Tory (and other MPs) plus the public and press opinion would welcome a compromise deal including putting off some difficult decisions to a post-COVID era and continuing ad interim in some areas with existing status quo arrangements. For EU legal purists in Brussels and anti-EU hardline ideologues in London, this may not be acceptable but if words and legal formulae can be found – and they can – the signals for a compromise are more positive than a few weeks, or months, ago. After all, the braggadocio this time last year this will be a major climb-down by Johnson. But if he wants to survive and lead the government in 2021, it may be his best course of action.

Denis MacShane is the former UK Minister for Europe. In 2014 he wrote Brexit: How Britain Will Leave Europe, which predicted the outcome of the referendum. This article appeared in the London School of Economics Brexit Blog