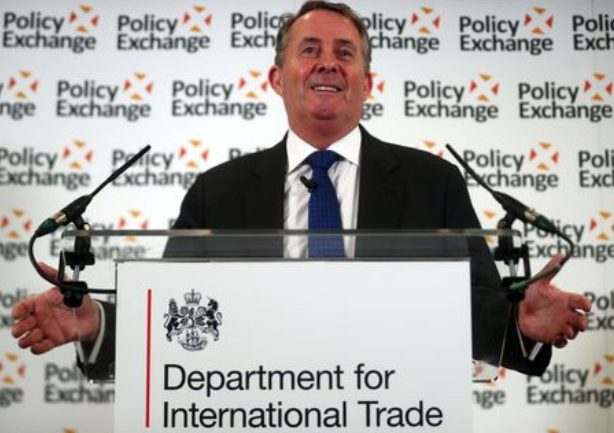 By TruePublica: The Government, through Liam Fox, promised that 40 EU free trade deals with 70 countries will still apply under a No-Deal Brexit. With little more than six weeks to go before Theresa May’s next big gamble with UKplc, Liam Fox’s inadequacy and inexperience in matters of international trade and business are laid bare.

Fox actually said he could “rollover 40 current EU free trade deals with 70 different countries”, so they will still apply to the UK under a no deal Brexit. He was wrong. Liam Fox is not a professional trade negotiator or economist and has never negotiated national trade deals in the past for anyone, let alone a country.  What qualifies Liam Fox for this role has baffled many.

His own department has since dismissed the idea that trade deals can be rolled-over. That’s because they can’t. The minutes of his own meeting read: ‘DIT (Department of International Trade) said there was confidence that some of those agreements could be signed ahead of exit date, although it was unlikely they would all be signed. This being so, there would not be continuity from day one of EU exit.’

Now, with just a few weeks to go until the Brexit deadline, the stark realisation is setting in. That reality is that Fox has managed to rollover precisely zero of the EU’s 40 or so trade deals. The CBI warned just two days ago of the “hugely damaging implications” of Fox’s failure for “relationships across the globe… from Japan to Turkey” if we crash out of the EU without these deals signed.

Fox also appeared to backtrack a few days ago when he told Sky News the ‘vast majority’ of UK trade would be unaffected by Brexit. He was proved wrong. Again.

So far, Liam Fox has signed four deals after a joint agreement (not an actual trade deal) with Switzerland and Liechtenstein two days ago. Chile, southern and eastern Africa, and the Faroe Islands have also signed agreements. After two and a half years of globe-trotting – that’s it.

This is nothing like the replacement value promised. In March 2018, the government reported the total value of goods and services exported by Britain annually was £620 billion. Combined these new ‘joint agreements’, signed in principle only, replace little more than five per cent of exported output.

Liam Fox failed in his bid to secure fast track normalisation of the UK’s World Trade Organization commitments before Brexit, finally conceding that Britain faces the prospect of lengthy negotiations. He was told by the CEO of the WTO over a year ago that it would take years, probably more to formally sign a deal with the WTO. Twenty members of the WTO including the USA, China, Australia, and New Zealand, the very same countries Liam Fox said trade deals would be signed up with on Brexit day objected to Liam Fox’s terms and conditions, so he was sent home with his tail between his legs.

Angus Brendan MacNeil, the head of the Commons international trade committee said – “When he gave evidence to my committee in July (2018), Dr Fox assured me that this was all going fine. But his plan is now in tatters after the UK’s proposed WTO goods schedules faced formal objections from some 20 countries, including the US, China, Australia and New Zealand. ”

Carolyn Fairbairn, of the Confederation of British Industry, said the ‘unfolding nightmare’ of Brexit would prevent major trading partners signing deals until the relationship with the EU is resolved.

That same year, Fox announced a new board of trade which would meet four times a year to “ensure the benefits of free trade are spread throughout the UK.” This was roundly ridiculed after a DIT spokesman said it was a “technicality” that Fox was the sole member of the board.

Liam Fox is notable for a number of things. He was an ardent supporter for the war in Iraq and Afghanistan that killed a million civilians, whilst saying about abortion – “For me, it’s a simple personal belief. It says, “thou shall not kill.” He is opposed to same-sex marriage, wants Edward Snowden arrested for treason and The Guardian prosecuted for reporting Snowden’s revelations. He was embroiled four times over the expenses scandal. Fox also admitted breaking parliamentary rules over trips abroad and in 2010 accepted large donations from military contractors when he was Secretary of State for Defence. Fox was forced to resign (AKA – fired) by the government for compromising national security by allowing a civilian (friend) to pose as an official without having a government post or security clearance in sensitive security meetings.

Fox is a hard Brexiteer who is at the forefront of reality because everything he has said about Britain being able to trade out of the EU has so far completely eluded him, his supporters and the government. The clock is still ticking. The first day of trade outside of the EU is April Fool’s Day.