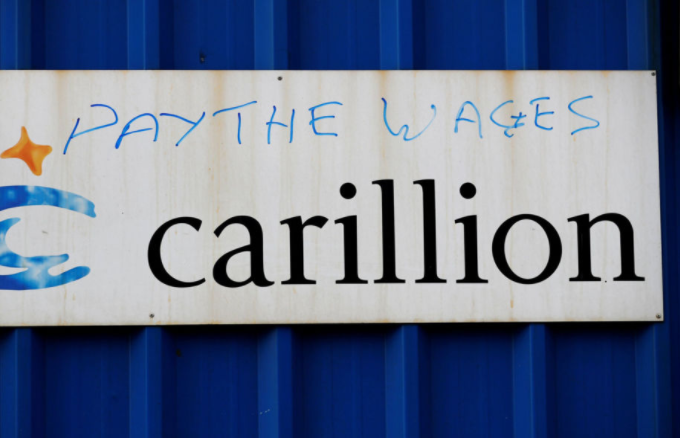 By TruePublica: As the Carillion crisis unfolds the numbers continue to confirm that for decades, companies, privatisation and extreme capitalism have failed in their basic business responsibilities and ends up threatening just about every strand of public life one way or another. In the meantime, tens of thousands of jobs are also threatened, the pension fund will need bailing out and dozens of infrastructure projects are thrown into question.

The examples of this unfolding scandal continues to take away the breath of normal sane people.

This is Money has just reported that: “The company’s demise leaves thousands of small firms it owes money to facing heavy losses. It is feared up to 30,000 businesses may be facing losses totalling up to £1billion. But small companies may get less than a penny back for every pound they are owed, according to a report by accountant EY. “Smaller firms and the self-employed are likely to bear the brunt of this crisis while the corporate giants involved in this sorry saga are unlikely to pay up” – Mike Cherry, national chairman of the Federation of Small Businesses.

The Times (paywall) also reports that: “One decorating firm said its workers had been turned away from the site of Google’s £1 billion headquarters in King’s Cross, London, and told they could not retrieve their tools. Builders working on the Midland Metropolitan Hospital, constructed under a private finance deal involving Carillion, were told they had been sacked and the gates to the site were locked.”

The Canary reports another dismal circumstance of out-of-control government hell bent on extreme neoliberal capitalism: “It has emerged that the boss of the collapsed public sector contractor Carillion also heads up a tax-avoiding fracking company. And like Carillion, the firm is in financial trouble, with the government at one point threatening to dissolve it.” The Canary went on to say that: “The group has identified that Keith Cochrane, Carillion’s interim Chief Executive, is also the Non-Executive Chairman of Third Energy. He was appointed on 4 September 2017, less than two months after Carillion made him its interim Chief Executive when it issued its first profit warning.

The Mirror Reports other impacts we are unlikely to hear much about – the personal stories of those whose hard work and endeavor will be crushed: “Two war heroes are facing financial ruin after becoming the latest victims of the Carillion collapse. Former soldiers Josh Lee and James Crisp took just four years to build up £1.3million-a-year Larc Construction. But they have lost more than £200,000 over Carillion’s failure, forcing them to lay off 15 workers including ex-comrades.”

And all of that was going on when it’s previous boss Richard Howson joined the board of a major Scottish oil company called Wood, formally the Wood Group, in the wake of the construction firm’s profit warnings earlier in the year. Ironically, he served on the board’s business ethics committee. Wood Group changed its name to Wood in October last year following a £2.2bn merger with Amec Foster Wheeler.

Wood announced in 2017 that it won a contract as sole supplier of inspection qualification services to the Hinkley Point C nuclear power station and there are many reports that Howson is still a director of this company. However, he resigned (quite probably pushed) three days ago as his toxic legacy and the scandal with Carillion continues to implode with great political embarrassment to the Conservative party ethos of privatisation, which has yet again proved to be a failure to the public interest.

As TruePublica reported a few days ago, the vultures were already overhead as far back as 2015. Hedge funds had been waiting to cash in on Carillion’s collapse and ended up raking in hundreds of millions from the debacle. “Marshall Wace – whose co-founder Sir Ian Marshall was a major leave backer in the Brexit campaign – was the biggest winner as Carillion’s shares tumbled last July after a profit warning. Its bet made a tidy profit on paper of £19.1 million pounds in just three days.”

We went further to say that the writing was on the wall and yet the government stood and watched this collapse. The hedge funds did not stand by: “Another big winner is the US-based investment giant BlackRock – which recently hired former chancellor George Osborne on a salary of £650,000 for one day a week – the world’s biggest fund manager made over £16 million across its funds. Other UK hedge funds that have coined it from Carillion’s decline include Thunderbird Partners which profited to the tune of £14.5 and Immersion Capital which stood to make over £11.4 million.

In all, hedge funds have made around £300 million from the debacle since spotting that the Government contractor was in trouble as early as 2015.”

It is needless to say that there is more to come with this crisis.