COVID-19 exposes the weakness of Brexit 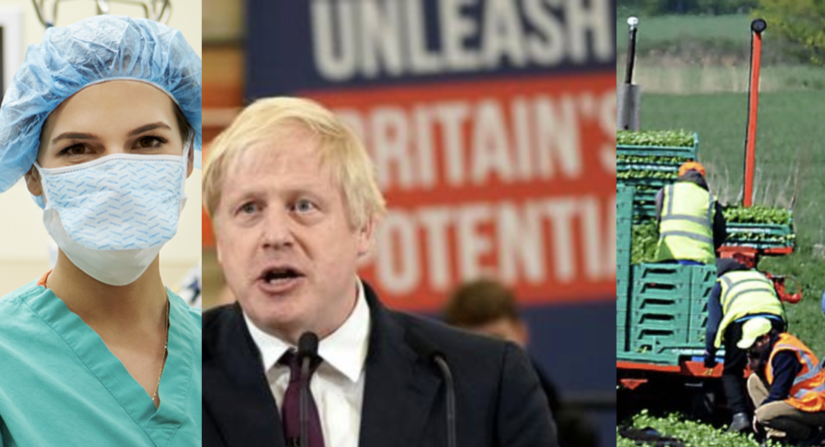 By TruePublica: There’s an irony being played out – a cruel one really. The COVID-19 crisis has unearthed some stark truths about how our country should be governed. One of those truths was just how important our key workers really are. Right now, the most dangerous job and most dangerous place in the country to practice it is to be a frontline medic in a hospital. This is closely followed by all other key workers that keeps the infrastructure of daily life moving. It is only in the face of a crisis that threatens us all do we remember this.

We also should not forget that nearly 12,000 NHS staff from the EU have left Britain since the Brexit vote – and there’s been an 87 per cent drop in applicants coming from the EU to work in the NHS. Don’t forget, it was only five months ago that the NHS winter crisis was in full flow because of mass resignations of EU medics during the year. With other staff leaving and recruitment unable to keep up – the service was left dangerously exposed. An NHS Confederation survey published last November said that nine out of 10 hospital bosses in England said they were concerned the severe shortages could damage patients’ health, with 58% believing this winter will be the toughest yet. And then the winter crisis turned into a catastrophe.

Brexit means getting rid of highly skilled European workers. And yet they have to be replaced, increasingly from outside the EU, which is much more difficult and more costly. And the government has ensured that the financial and administrative barriers are not worth it – so Europeans don’t bother applying.

Then there are the calls to arms by the government to volunteer amid the crisis. One of those calls  was for a ‘land army.’  It was a call to help farmers get their crops picked. This was because at least 50,000 migrant fruit pickers had not turned up because the COVID-19 crisis. But before C19, it was already a big problem – just like the NHS shortage. Last October the papers were full of reports that thousands of tonnes of fresh fruit and veg were rotting in the fields as many migrant pickers had not registered to work in Britain anyway. The government even put a cap on the number of migrant pickers coming from the EU.

On 20th October last year, Ali Capper, chair of the NFU’s horticulture and potato board said -“I think it is morally reprehensible that we are allowing this level of food waste. Capper also admitted – ““It has been about making people feel like they are not welcome here.”

After the government call for a ‘land army’ – the Alliance of Ethical Labour received 50,000 applications expressing interest in helping pick crops during the coronavirus lockdown after the government launched its “Pick for Britain” initiative.

But the Telegraph reports that out of the strong number of applications just 6,000 opted for a follow up video interview for a role.

Around 900 then rejected the job offer, with just 112 taking the offer of a seasonal job on a UK farm. Yes, you read that right – out of 50,000 who stuck their hand up to help Britain out in a time of crisis, just one-quarter of one per cent actually went ahead. British people don’t want to do the work of economic migrants.

And there were plenty of excuses for not turning up, which included the farm was too far away, they did not want to commute or only wanted part-time work.

The agricultural industry voted overwhelmingly for Brexit. The Telegraph enthusiastically crowed on its front pages on January 20th this year that “British farming can be ‘envy of the world’ after Brexit, leading agriculture figures tell Prime Minister.” Now, with no-one to pick their fruit this is the sorry message.

“I am quite worried that we have had thousands of people apply but when it comes to the nitty gritty, we will only get tens coming through,” said Greville Richards, managing director of Southern England Farms. “If there are good people out there who want to come, then we’ll take them. It’s hard work and it’s long hours but it’s good money. It gets my back up when they say people are coming here on the cheap. They do earn their money, they work hard but what is concerning is that that is putting off a (high) percentage of the British workers. That is what we are finding quite difficult.”

Over the weekend the environment secretary George Eustice encouraged those furloughed workers to take a second job in the fields to help with the efforts.

The industry has previously warned that there is actually a shortfall of 70,000 workers in the summer months, with farms previously relying on up to 90% Eastern European workforce.

Earlier this month the British Growers Association warned more will be needed from May onwards to deal with the fruit and vegetables that will need to be picked.

Jack Ward, chief executive, said: “This is a long game. The salad season will run well into October and growers have got to be very confident that they have got enough labour for the entire season. “We could be in a very different situation let’s say by July 1.”

It came as 160 Romanian pickers were flown in to help farmers at the start of the coronavirus lockdown, with the industry suggesting there may need to be more.

Ironic isn’t it how dependent we all are for European migrants to do the work we can’t do or won’t do – but don’t want in the country because – they are taking all of our jobs!